In little over a decade, Node.js has emerged as a top-developer choice for web application development. Its pros make it a superlative alternative for cross-platform development by integrating a 2-way client-server communication channel. Without plunging into the technicalities, let us know the top Node.js development statistics that substantiate its superiority over the competition:

It gives programmers the leeway to use JavaScript to create command-line tools for server-side scripting. However, if you need further convincing, here are 12 reasons why Node.js development is at the peak of its powers and seemingly unshakable in the immediate future.

Reasons Why Node.js for Web Development is the Perfect Choice 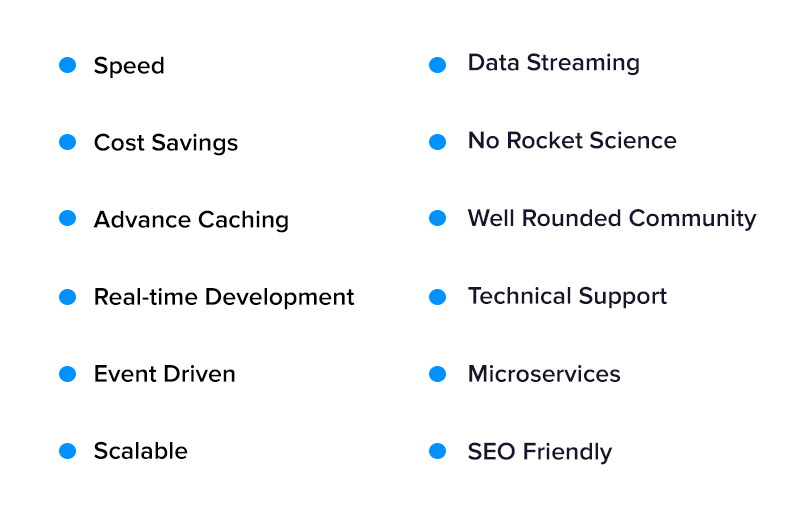 The internal workings of this open-source runtime environment involve package management, unified APIs, native bindings, and threading. Below we elaborate on how such technicalities result in productive work.

The V8 engine, developed by Google, powers Node.js. It allows for JavaScript code to be converted to machine code and contributes to development time savings on program executions. Products for web app development with Node.js can handle a significantly higher number of parallel connections.

Thanks to Node.js app development, Paypal was able to reduce its app response time by 35%. With such an anomalous increase in application productivity, the company processed double the number of user requests.

As a web development company, Appinventiv receives multiple inquiries from prospects to hire dedicated Node.js developers. But our product suite consists only of such services whose proof is in the pudding. Upon conducting a cost-benefit analysis, we found that Node.js development costs far less than anything else out there. Its memory footprint is smaller in comparison to PHP or Java servers. A server built on Node.js runs on an event-driven loop which saves a huge portion of the Random Access Memory (RAM) and in turn hardware/software resources.

Ask any Node.js developer and they would probably point to the caching capabilities as its greatest asset. It can cache single modules. But what difference does that make?

It eradicates the need to re-execute code as servers call for the first module. Caching allows websites to load faster and alleviate the user experience.

Real-time apps are such that provide dynamic, spontaneous engagement environments for users. Examples include gaming apps, messenger apps, etc. Their development involves a lot of event-based programming and communication with a non-blocking server. Developers can maximize their efforts towards real-time web application development using Node.js as it uses asynchronous operations to optimize the coordination with the CPU and the memory.

The platform is event-driven i.e. all its developed APIs in the Node.js library are asynchronous. But what does this mean?

A server based on Node.js does not wait for the Application Programming Interface to return data. Instead, it calls the API, following which the built-in notification mechanism of Node.js aids the server to procure the return-call from the previous API.

Node.js uses microservices with which it divides an application into finer processes. These processes can be allocated in parallel to multiple teams so that they can be developed in sync with the rising user requests. Faster background processes translate to low-lag operations and an increased footfall of user traffic.

That said, never use Node.js for CPU-intensive processes.

Product development is not as simple as people put it. As a Node.js development company, we learned it the hard way. Input-Output (I/O) handling is a key component of software engineering. With the tendency of web frameworks to classify HTTPO requests as whole data, I/O handling gets trickier to integrate.

But that is not the case with Node.js mobile app development which supports I/O bound applications. While using apps built on Node.js users can transcode multimedia files simultaneously as they are being uploaded onto the server.

What makes this a manageable procedure is a provision that writes data streams onto WebSockets. 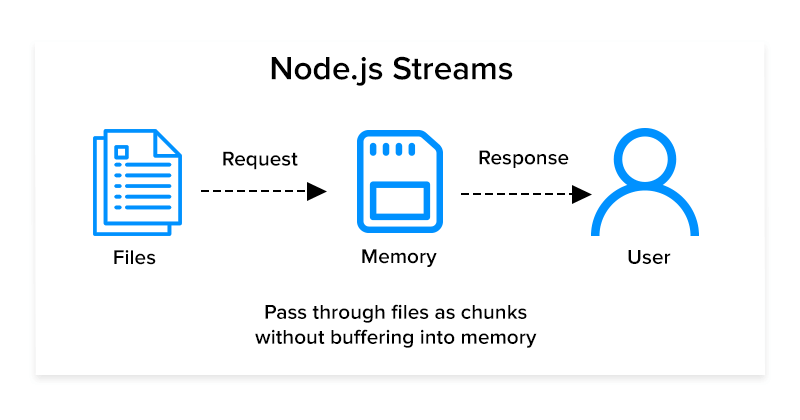 Most of the programmers these days are familiar with JavaScript. As Node.js app development is a JS-based runtime system, it is relatively easier for amateur coders to make the switch. They can achieve the same results as working with Django, PHP, or spring boot in much less time and devoting far less computational resources.

In a StackOverflow survey, Node.js was voted rank #1 for two years running in the miscellaneous technology category. This goes on to show how well-knit and widespread the developer community is on this tool. Constant upgrades keep people coming back for more, and access ready-to-use plugins and code-bytes accessible on GitHub. 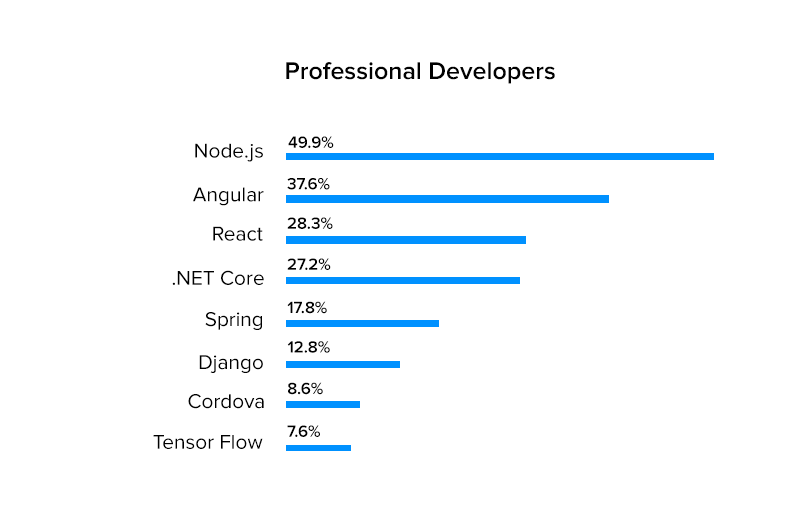 Another reason why professionals prefer Node.js for web development is that its parent team offers long-term support. As per convention, following the release of each version of Node.js, the code is maintained for the next 18 months. Instead of continuing to add new features, this period is utilized to fix bugs and collect user feedback for future releases.

It is reported that long-term platform support is prioritized by 62% of developers.

On prior occasions, we’ve touched on the topic of microservices and monolithic architectures. Enterprise-grade projects have an inclination towards implementing the microservices-based architecture. This serverless approach pays dividends in the long run and is also supported by Node.js.

More often than not, developers adopt a backwards approach when it comes to SEO practices. They design a website and then  re-design it to become pro-SEO. But that doesn’t have to be the case with Node.js. Its built-in features offer such pre-packed codes that are in tandem with search algorithms.

Another reason for using it is that it’s free!

Knowing and understanding the above mentioned points, as a Node.js development company in the USA we can say with authority that open source is the way ahead. In addition to being free, it offers state-of-the-art toolsets that include Redux and Flux. It is highly integrable with open source libraries.

Typical Projects to Start with Node.js

As a Node.js development company, we suggest the following projects to train your in-house team on the platform.

Present-day web applications bear an overloaded semblance partly due to the fact that they have to process client data. Working in this environment ensures faster response times between the server and client-side. This is a founding tenet that every single page app is based on.

While offering Node.js development services our experts have experimented with installing Node.js as a proxy server and it worked like a knife through butter. It helps in the case of apps that rely on external services to import/export data.

As a web development company, Appinventiv has the firepower to kickstart Node.js-centric product development in full swing. With 600+ personnel joining forces from home virtually (till the pandemic lasts), we’ve handled cross-border projects and made a name for ourselves. But all that was possible only with the collective efforts of our growth hackers, who have what it takes to push through for technological superiority.

Are you superior to the competition?

If not, let us make you!

Are you a budding entrepreneur looking forward to kickstarting your digital business or an enterprise looking to enhance its online presence through a well-performing website? If yes, you have landed at the right place. Being one of the most powerful marketing channels, a website can drive higher sales and enhance customer retention. It can further…

The top API security risks and how to mitigate them

Powered by a massive rise in microservices and the constant push to deploy applications quickly, APIs have become a go-to name for every entrepreneur.  However, with every small feature getting linked with other software or products for a seamless user experience, APIs are increasingly becoming a hub for security hacks. So much so that the…

Top 15 best database for web applications to Use in 2022

Digital transformation, regardless of whether a private venture or large organization, has empowered companies to produce information at every touchpoint. Irrespective of the organization, each organization requires a database to sort out and store its fundamental data. To provide such a facility, the database management system software is to the rescue. A database can be…