Vue.js vs React.js: Which will be the Best JavaScript Framework

When we talk about the Frontend mobile app or web app development, there are two things that are absolutely certain – A. JavaScript leads the frontend domain and B. React.js has over time emerged as the most trusted library for the development of apps.

And why not, after all, React.js is what powers React Native – the cross-platform app development mode that has given businesses a lot to reasons to adopt in their ecosystem.

Joining the list of Frontend certainties is the growing popularity of the Vue.js framework.

The growth in adoption rate that Vue.js is witnessing, is what is fuelling the discussions around reactjs vs vuejs: Which Framework is Winning the Race to Becoming the Top JS Framework/Library.

Your next 5 Minutes will go into finding an answer to just that.

While we have already talked about the options that businesses have when it comes to the front-end development of web apps, mobile apps, and even PWAs in-depth in an article before, this piece is about the comparison of two framework/library that we listed as the Fantastic Four JS frameworks that would rule the industry in 2018 and for some time to come – Vue.js vs React.

Now all comparison of Vuejs vs React would come to a standstill until and unless we have gathered a complete understanding of both the JS frameworks. So, before we move onto the comparison part of Vue vs React, let us look into what both Vue.js and React.js entails and what are the strengths and disadvantages that come attached with both.

What is React JS?

Developed by Facebook to handle view layer for both mobile and web applications. React.js is used mainly for developing front-end interfaces. It is used as the view part in a MVC model. And since developers can also render the React JS on server as Node, it can is often used for native application development as well.

What is Vue JS?

With the meaning of both attended to, let us get down to the perks and disadvantages that come attached with the two JavaScript framework/library and helps in understanding which which of the cross platform app frameworks hold the potential to win the React vs Vue debate.

Let’s start with the pros and cons of Reactjs first.

Even with the presence of evident shortcomings, the adaptation rate of React.js is what keeps it afloat in the market. The library continues to provide an ecosystem that favours near native app experience to the users.

However, knowing React.js pros and cons is not enough to declare it the best of the two. What cannot be ignored is the rate at which Vue native framework is growing in the mobile app industry. Since, the framework is considerably new in the industry, the expectation that it comes with visible advantage over other JS frameworks is pretty evident.

Let us look into the framework into more detail to get an idea of whether it is ready to stack over React.js.

Now that you have seen the best and the weaknesses of both frameworks, it is time we look into what separates Vue native framework with React.js.

Here is a reactjs vs vuejs comparison table – 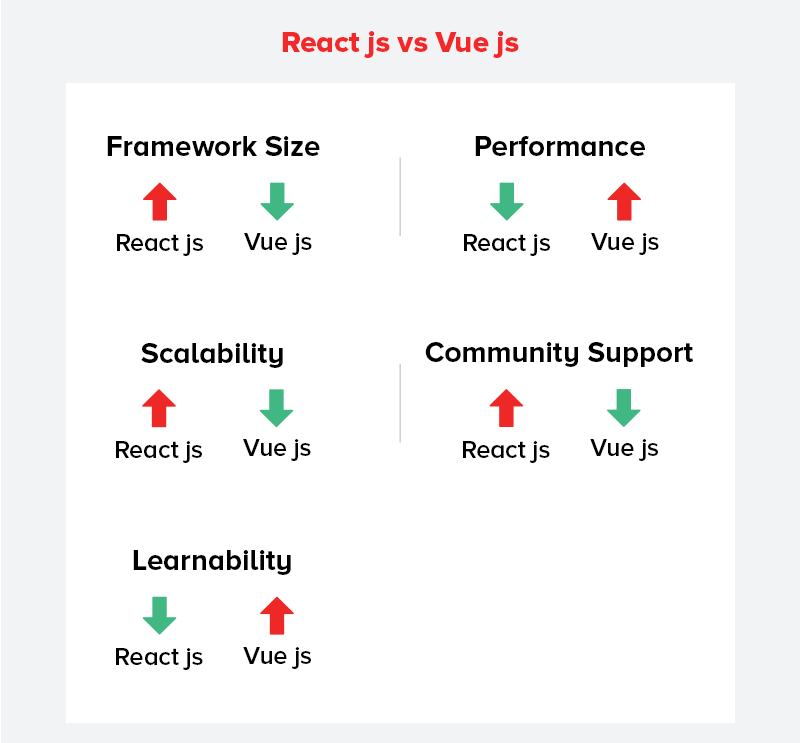 Amidst all the differences, the decision between which is a better framework in the Vue vs React discussion ultimately comes down to these deciding factors –

React.js is based on virtual DOM. The applications made on React.js compare two DOM trees where the rendering starts specifically on those nodes that needs changing. While this method betters the performance on the client side, among the other various benefits that comes with using Virtual DOM in React.js, at times when Animation is created with complex synchronization, the approach doesn’t come in handy.

On the other hand, while Vue js native app is also based on Virtual DOM, but it does so with a lot more filigree, meaning the references are operated to every node of the tree, which is the number one reason why developers select the framework for apps that are high on animations and interactivities.

Although both Vue.js and React.js operate on Virtual DOM, which in itself come with a share of performance issues, Vue pays a greater attention to the shortcomings. And because of this fact, Vue.js comes with a lot less overhead and faster speed. Along with this, Vue native app has the ability to manage high frames rate – 10 frames per second when compared to the 1 FPS of React.js.

When it comes to React.js, the library comes with zero division in MVW, MVC, or MVVM structure. With the absence of a division in app’s presentation and logic, multiple developers cannot be implemented at the same time, which makes mobile app development process complicated.

On the other hand, Vue js mobile app is based on an MVC framework, which brings it some points ahead in the React vs Vuejs discussion. It gives the developers a template which is shown in the form of filters and directives that make the code a lot more readable, thus reducing the occurrence of bugs.

When we talk of front-end development of apps, in the Vue.js vs React.js discussion, React is points ahead of Vue.js native app.

As per the common understanding in the mobile app development ecosystem, frontend scalability is the capability to maintain expanding functionality. Whatever development platform that you choose Vue.js or React.js, it should be able to support the growth that a quality app’s frontend should.

Now on that front, while React make use of a component based approach with superb results, Vue native apps are known to be developed using a template specific syntax, which makes it very difficult to reuse as the app size grows.

One of the major differences between React JS and Vue JS is how the view layer is developed.

Vue JS makes use of HTML template, while there is the option to write in the JSX. React JS, on the other hand, uses only JSX.

What developers think about React JS and Vue JS can help you understand which should you choose for your app development project.

It is another prime difference between Vue JS and React JS. Vuex just like Redux, is the library inspired by the Flux. Unlike Redux, the state of Vuex changes instead of becoming immutable and getting replaced completely, like in the case of the Reduc reductors.

This in turn enables Vue to retrieve the data automatically which can be re-rendered when state changes.

React is mainly centered around UI, so initially you will get a lot of help for building UI elements. But, React JS doesn’t offer you state management, so you will have to use Redux as the state management tool.

Vue JS being a dynamic framework allows utilizing basic tools for creating an application. However, it offers other functionalities which developers might require:

React Native is the React based platform that allows developers to create cross platform applications that run on both Android and iOS platforms.

On the other hand, Vue.js mobile app has to be paired with the NativeScript to enable developers to build cross-platform apps using JavaScript, CSS, and XML.

Both Vue.js and React.js have their share brands names favouring them –

Now that we have looked into both the JavaScript frontend frameworks – Vue.js framework and React.js Library in depth, let us now get to the section that would help save a few steps of discussion of your discussion with your partnered mobile app development company – When to Use Which JavaScript Framework/Library.

When to Use React.js Library

There are some very evident instances where investing in React.js makes more sense than developing an app around Vue.js –

When to use Vue.js Framework

Like React.js, vue js mobile app also makes sense only in some calculated instances such as –

With this, we have now come at the end of the comparison article. If you are still waiting for our verdict on which framework/library would become the best JavaScript framework in 2020 and beyond, our unbiased answer would be React.js. Vue.js would take some more years to stand next to, let alone overpass the React.js popularity.

But then again, there are legitimate situations where Vue.js makes a lot more sense than React.js. So, what we would suggest is to contact our mobile app development experts and understand which framework/library would best suit your business needs.

FAQs About Vue.js vs React.js

1. Is Vue js better than React?

Just like React.js pros and cons, Vue.js comes with its own share of benefits and disadvantages too. So, the answer to if Vue is better than React would vary from situation to situation like the complexity of app, when do you want to launch the app, etc.

2. What is the difference between React JS and Vue JS?

When we talk about vue.js vs react.js, there are a number of differences that come up, even though both are popular for their offerings.

The factors on the basis of which the comparisons are drawn are: