Vue vs Ember: Which Client-side JS Framework to Prefer?

Whether it’s an app or a website, choosing the right client-side JavaScript framework holds paramount importance. It simplifies the development process, ensures on-time delivery and higher success in the market.

But, how to ensure that the chosen framework will suit your development needs, especially when talking about Vue vs Ember – the two less familiar faces of the JS World?

Taking the thought forward, we will look into the comparison of the two frameworks in this article. We will dig out what separates Ember and Vue from each other and ultimately, which one to focus on for your app needs.

Before we turn towards the Ember.js vs Vue.js comparison, let’s have a quick overview of both the JavaScript frameworks and determine why to go beyond React vs Angular comparison.

Vue.js and Ember.js: A Brief Introduction

Introduced in 2014, Vue.js is an open-source framework that holds the best features of Angular and React frameworks. The framework does not only have a ready-to-use standard library for designing UX elements but also allows the developers to use various third-party Vue-based frameworks to meet their needs.

Besides, the framework comes with several benefits that empower developers to build single-page web applications, including:-

One of the benefits of Vue is that the app based on this framework can be as light as 18kb after zipping – even when all the impressive features are introduced in the development plan.

The vue.js framework serves the developers with a detailed yet easy to understand documentation, where each concept is explained with the help of code examples. This cut down the hassle of the developers in terms of gaining some information or getting out of some issue and act as a reason why Vue.js is getting a huge momentum in the mobile market.

The Vue.js framework – version Vue 2.0 and above – favors server-side rendering. This enables the app developers to render the views directly on the server which will further by indexed by server engines, implying helping them with gaining impressive SEO advantages.

Vue.js framework let the developers write the codes solely in JavaScript and get the perks of the clean code property. This enables them to read, understand and update their codes anytime, making the development process faster and more effective.

Vue encourages a simple and quick integration process that enables the developers to go both ways, i.e, developing an app from scratch and by integrating top-notch components into an existing application.

An outcome of these characteristics is that Vue.js framework has become the first choice of various reputed brands, including:- 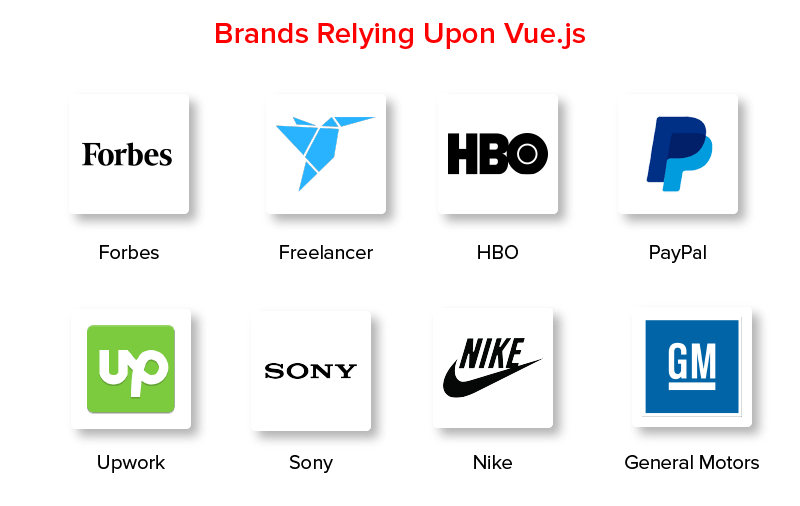 With this, we have gone through what is Vue.js framework and what all you need to know about before starting development with this framework. So, let’s turn towards the other framework to grasp its basics before starting with the actual comparison.

When looking into what is Ember.js, it’s an open-source JavaScript framework derived from Apple Music. It is one of the best JavaScript frameworks to consider in 2019 and is taken into consideration for building complex web applications and string-based templating system. The framework is gaining popularity in the market due to benefits such as:-

In the Ember.js development environment, most of the components come from the Ember Object model. Because of this, they showcase the same type of basic functionalities and services and thus make it easier for the developers to make the use of Ember.

Ember JS framework does not demand the need to configure. The framework is already configured, implying you can begin with coding instantly.

The framework comes with its own built-in router, which saves the efforts of searching and installing the third-party plugins to employ routing efficiently.

Another benefit of Ember framework is that it comes with a debugging tool, called Ember Inspector which function effectively with almost every web browser.

Ember is an absolute full-stack client-side development framework, which means it provides its own set of router, pipeline, services, etc. to the development team.

It has been considered as a part of the prime tech stack by various popular brands, including:- 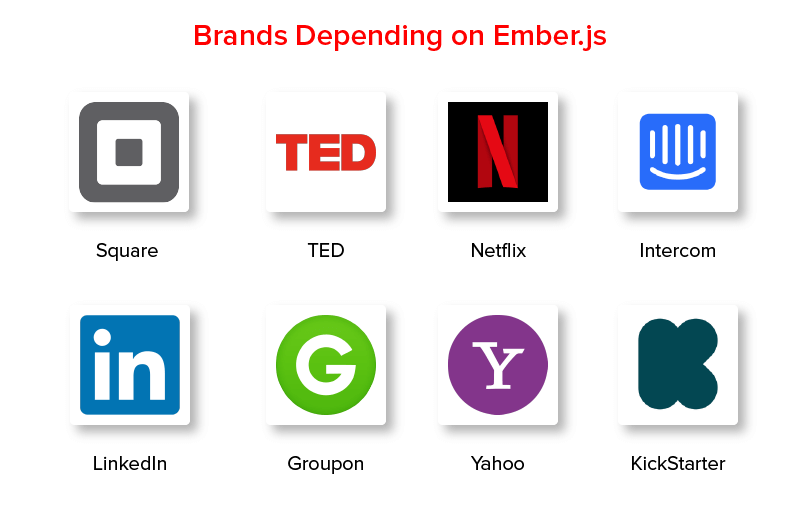 Now, as we have gone through the basics of both frameworks, let’s head towards the main part of the article, i.e., an extensive comparison of Vue.js and Ember.js. 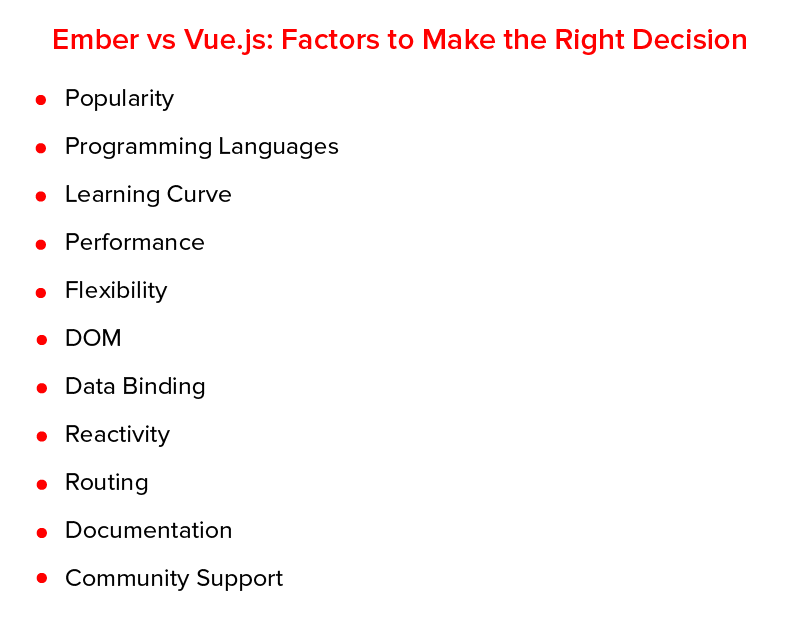 Ember is purely a JavaScript-based framework, implying you need no other language for web and mobile app development. But, when it comes to Vue framework, you need to employ HTML, CSS, and JavaScript altogether.

Though Ember uses only JavaScript for development purpose, it asks developers to get familiar with various conventions. This makes the learning process time-consuming and hectic.

However, there is no such constraint in the case of Vue framework. Familiarity with HTML, CSS, and JavaScript is enough to design SPAs and non-trivial applications using this framework.

The latter framework relies on Virtual DOM and comes with the ability to manage 10 frames per second, lessen the overhead and enjoy higher speed – making it even better than React.js, as revealed earlier in our Vue.js vs React.js blog.

When talking about Ember vs Vue in terms of flexibility, Vue.js offers higher flexibility options.

The Vue.js framework enables the app developers to write a template the way they want. It empowers them to develop a sophisticated application using options like routine and bundling and run it directly on the browser.

But, Ember is a full-featured, highly-opinionated framework with a steep learning curve. It renders a myriad of established conventions that lower down the flexibility level.

While Ember goes with MVVM (Model-View-ViewModel) approach for creating dynamic web and mobile applications, Vue.js framework focuses only on the view model and relies on Virtual DOM approach. Because of this, Vue.js shows limited data and reflect changes in the real DOM only when all the components are modified and thus, deliver better results then Ember.

Since one-way data binding approach is more feasible and profitable in the long run and in the case of complex mobility solutions, Vue.js wins over Ember based on this JS framework comparison factor.

Vue.js avails a higher reactivity on plain JS objects as well as fully automated computer properties. This saves massive efforts and time which the developers can use for writing better clean codes and delivering exceptional user experience.

Whereas Ember.js framework, on the other side, recommends wrapping up all the elements in Ember objects and declare the dependencies by employing computer properties. This makes the framework lag behind the former JS framework in terms of reactivity.

On one side, Vue provides the developers with the router library that can be taken into consideration for building a single page application. While, on the other side, Ember comes with its own built-in routing capabilities that give developers an escape from using third-party plugins and aid them to manage the application state from the URL itself.

The Vue.js framework, as covered earlier in our Vue.js vs Angular blog, has basic CLI and extensively updated documentation.

But this is not so in the case of Ember.js framework. The JS framework has a small community because of which only a fraction of information is available on the forums and blogs found on the web.

When comparing Vue vs Ember on the basis of community support, Vue wins the battle.
The Vue.js client-side development framework is gaining huge momentum in the market, especially among the non-English native speaker. Whereas, Ember is considered by only a few developers because of the steep learning curve and slow rendering option.

So here were some of the factors will aid you to pick the right platform for your client-side development needs. But, in case you find yourself in a dilemma even after going through this comprehensive Vue vs Ember comparison, approach our app development team.