EOS vs Ethereum: Who Will Win the Title of Best Smart Contract Platform

Getting into agreements in a sans Blockchain world involves an active participation – which comes attached with a price tag – of intermediaries, something that in one way or the other limits the horizons a business can reach in terms of extending their business relations.

Cut to the era of Blockchain.

Blockchain, along with its sidekick Smart Contracts enable businesses to develop a decentralized ecosystem that allows them to make agreements without the involvement of any third party intermediary – Ergo, New Horizons now comes into the picture for Businesses to penetrate in.

Although Smart Contract seems so have received its fair share of hype only after it came under the shadow of Blockchain Technology, the concept had already made its appearance twenty years ago when Nick Szabo, a cryptographer wrote an article about it.

So what are Smart Contracts exactly?

Smart Contract is a computer program that is stored inside a Blockchain. They are coded in a way to automatically control asset transfer between two (or more) parties, when the predefined conditions are met.

What is a Smart Contract Platform Supposed to Do?

A Smart Contract Platform is a platform which provides support for creation and execution of smart contracts. There are many names in the list of smart contract platforms in the market today – Ethereum, EOS, NEO, Hyperledger Fabric, Cardano, Stellar etc.

Out of all these platforms, today we will be focusing our attention on the oldest and most adopted – Ethereum and the new and hyped platform, which claims to be more efficient than Ethereum – EOS.

In this article, we will be comparing the two powerful platforms – EOS vs Ethereum – head on to fathom which platform has the potential to go farthest.

Ethereum is an open blockchain platform that allows developers to build and execute Smart Contract on Blockchain. To enable blockchain app developers to implement smart contracts on Ethereum, the platform has launched its own contract oriented programming language called Solidity.

Ethereum, aside from being the leading smart contract and decentralized application development platform, also has its Ethereum cryptocurrency platform called Ether.

The brainchild of Daniel Larimer (the name behind Graphene Technology and the first developer to have implemented the POS consensus), EOS platform works on a similar model like Ethereum but comes with a number of differentiating factors.

EOS makes it possible to process greater number of transactions on a per second basis than Ethereum. The platform, feature wise, is a lot more scalable and includes elements like sharding, plasma, and the comes with the benefits of the proof of stake (dPoS and TaPoS) consensus.

Like Ethereum, EOS has its own EOS cryptocurrency platform as well, named after the platform itself – EOS Cryptocurrency

With this, you are now up to speed with what both the platforms are and now (finally) it’s time to get on to what we came here for – to answer the question on every Blockchain enthusiast’s mind ‘EOS vs Ethereum: Who Will Win the Title of Best Smart Contract Platform’

Ethereum has been developed as a neutral platform. It doesn’t come packaged with features, which allows users to develop their own feature based sub-protocol within a contract. This prevents instances of bloating in an application.

EOS comes with functions like app/blockchain communication tools and cryptography implementations. It features a range of different options varying from web toolkit to help with interface development to the self-describing database schemes.

Ethereum is presently working on a Proof-of-Work consensus with the plans to move to a hybrid of Proof-of-Work/Proof-of-Stake. Ethereum makes it mandatory for developers to adhere to the code and solve major disagreements through forks.

EOS uses Graphene technology that makes use of the delegated Proof-of-Stake (dPoS and TaPoS) consensus. For resolution of disputes, EOS will come with la egally binding constitution which would establish a common jurisdiction.

Ethereum network has till date achieved around 25 transactions per second and it can increase to upto 50 to 100 tps.

EOS has been able to achieve over 10,000 to 100,000 transaction per second in stress testing. The platform, which is based on Graphene technology, uses parallelization to enable scalability and for allowing million of transactions to run together per second.

Ethereum charges fees, in the valuation of Ether (the Ethereum Currency), in return of using storage, calculation, or bandwidth. The required fees in Ethereum fluctuates and the miners are given the option of selecting transactions that depend on the fee size.

EOS will make of ownership model, where the EOS token holders will get a proportionate share in storage, network bandwidth, and in processing power. They will have the provision to upgrade by buying more EOS.

EOS platform though, will charge zero network development and transaction fees. Users will only have to purchase the EOS token in the initial phase.

In Ethereum, Miners select the high fees transactions for adding them to Blockchain and since there is a limited bandwidth and computing power, probability of low fee transactions getting blocked out are very high.

Ownership of EOS tokens gives the users a proportional stake in storage, network bandwidth, and the computing power. In EOS, even the startups that have a very little stake invested in the platform also get guaranteed, reliable computational power and bandwidth.

So here were the points of difference that define the underlying ecosystem of both EOS and Ethereum.

Seeing this, it is safe to assume that EOS, once fully functional and adopted, holds the potential to replace Ethereum in the near future, if the latter doesn’t introduce updates to make its platform more user centric instead of profit centric.

While that is about the future, if Ethereum wants to come points ahead of EOS sooner, it will have to make amendments in its architecture by introducing features akin to Operating system architecture of EOS. In fact, the DOS incident that happened back in 2016, could have been avoided completely if Ethereum was indeed an Operating System and not a state machine.

While saying EOS will replace Ethereum in the coming future is still a statement less of surety and more of probability, the differentiating factors that EOS comes packaged with, bring the platform very close to winning the race to becoming the best smart contract development platform.

EOS Features that Bring it Points Ahead of Ethereum 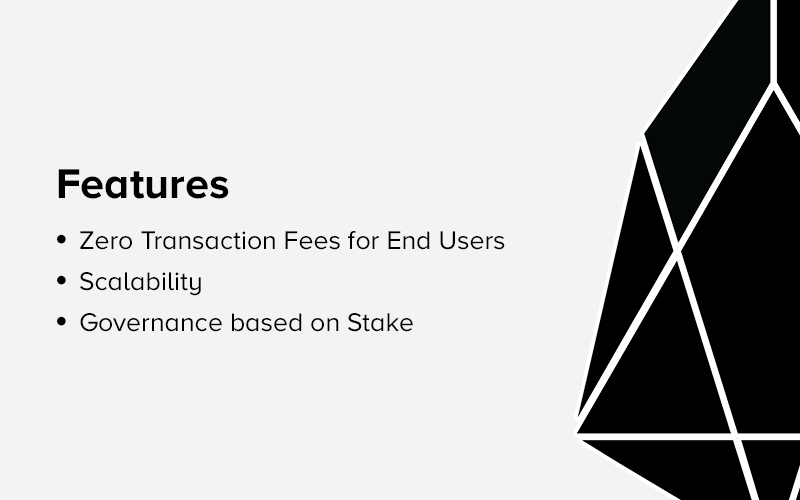 While EOS users should own or rent some cryptocurrency to use the platform, they don’t have to pay anything to perform a transaction. A factor that works in favour of the B2C users, who no more have to pay to make transactions on their decentralized applications.

Also, since there is no entry fees, businesses that lack the technical know how can also confidently enter the world of Smart Contracts.

The transaction per second number that EOS is aiming for is far more than what is offered by Ethereum. While in case of Ethereum it is 15 tps, EOS stands at 1000 – 6000 transactions per second.

EOS uses asynchronous communications and separate authentication from the execution itself to achieve speedups.

3. Governance based on Stake

EOS Cryptocurrency Holders have the right to vote on a change of protocol, with the vote count being proportional to the amount of cryptocurrency that they hold.

Are these differentiators enough to validate that Ethereum time is coming to an end? Is Ethereum passing the baton to EOS? Well…. Not in so many words.

It has now become a matter of time. If Ethereum is able to work on its obvious scalability issues and act on its image – that although it works great, it works on a limited scale – through updating its ecosystem while there’s time, it will survive the race.

For now, we will have to leave it on time to declare the clear winner of this smart contract race. Because the current state of both the platforms are that there are some decentralized applications that will need the speed and scalability that EOS offers and there are some that would need the privacy and censorship resistance that Ethereum offers.