What are the Benefits of Blockchain for Government Services?

It will be wrong to say that Blockchain today is what the internet was in 1995.

While the possibility of reformation that the Internet has brought is the same as what Blockchain carries, the difference is in the role the two groundbreaking technologies play – Internet on the foreground and Blockchain on the background.

Like in so many other places, the possibilities of using blockchain for government services and public sectors will be behind the scenes, where it will operate to make government bodies efficient, secure, speedy, and trustworthy.

The result – blockchain-based digital government – however, will be visible in every interaction that the public will have with the decentralized system.

How Blockchain Can Transform Government?

The hyper-connectivity that can now be seen in the world around us, has not just given birth to more data but has also brought in a significant transformation in how the economy is now operating and interacting.

This era of constant change and the economical shift is demanding the government to become more transparent, efficient, cost-conscious, and real-time, which translates into a government that is truly citizen centric.

Now, meeting this newly emerged demand will call for a shift that would shake the grounds of a bureaucratic government body. A shift that will only be made possible by fostering the induction of a secure blockchain architecture and other features of this technology.

The many benefits of a Decentralized Government revolve around making government bodies more efficient, in not just how they work but also in where they stand on the public loyalty chart.

The blockchain use cases in government and the public sector are majorly centered around three of the technology’s core areas: 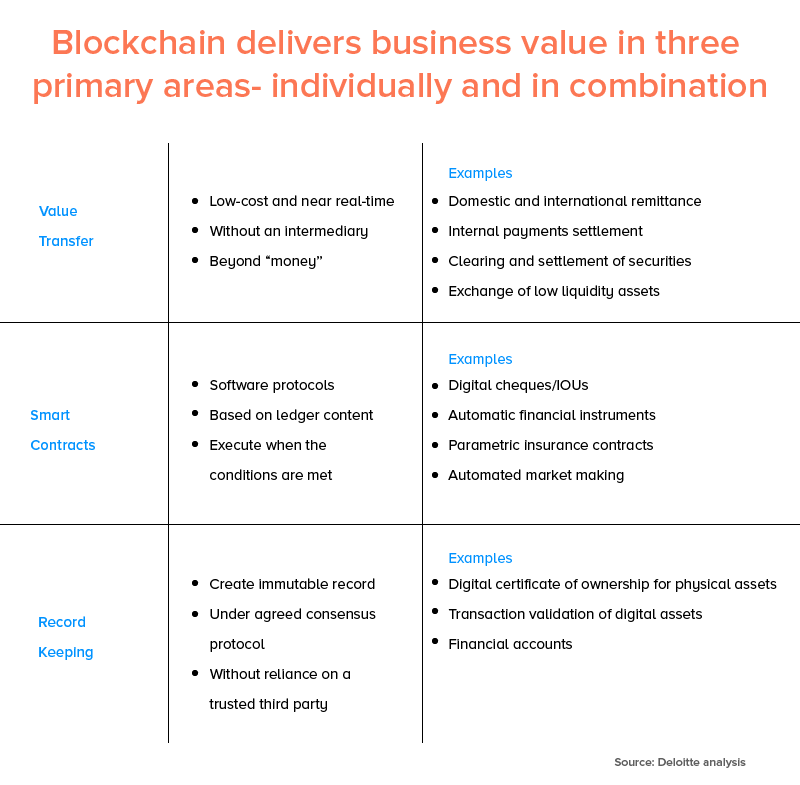 The role of blockchain for government services– when these three core areas are used either in combination or individually – affect a plethora of areas, with three of the most nation impacting ones being:

A. Building Trust with Wary Citizens

At a time where the trust that citizens put in their government is at an all-time low, there is a need to reverse this growing trend of constant distrust.

And Blockchain, with all its different features, comes as the solution.

Its primal feature – Transparency changes half of the sentiments by allowing citizens to view and verify data. Blockchain solutions allow citizens to perform their personal verification on the claims that the government makes – something that expedites the entire issues resolving process.

B. Protection of Sensitive Data

Data hacks and stolen identities have become a sad part of today’s reality. And as a by-default record manager of the society, governments have become the main target of hackers globally.

Issues like 2017’s Equifax brach where the personal details, including the social security number of millions of Americans, were exposed and 2015’s data loss incident where millions of government employees data were compromised straight from under the nose of the Office of Personnel Management are continuously being held responsible for bringing the citizens’ trust down.

This is where immutability, another feature of blockchain-based solutions, comes into play to make a complete nation hack-proof. Blockchain data structure strengthens the security of the network by eliminating the scope of the single point of failure errors and this in continuation, makes a system unhackable.

C. Improvement in Efficiency and Reduction of Costs

The third in our list of premium benefits of blockchain for government services is in terms of cost reductions. For the leaders of nations that operate on a budget of X dollars to meet the need that amounts to X+1 expense, Blockchain can be a lifesaver.

Use of Blockchain, when incorporated rightly, can not only lower the costs but also limit redundancy, streamline processes, increase security, decrease the audit burden and even ensure that the data integrity is maintained.

To explain this a little further, let us look at the fact that there are around trillion dollars lying as unreconciled funds within the federal budget. Now the process of reconciling these funds is expensive, time consuming, and uncertainty breeding. But when you loop in public sector blockchain applications in the accounting and payment system, you get a permanent audit trail and a much-expedited reconciliation.

These benefits and the myriad of other benefit strings that come attached with these, have not gotten unnoticed by governments around the globe. There are many government bodies who have either started planning for the deployment of blockchain data structures and its other use cases in their process or have already introduced it. 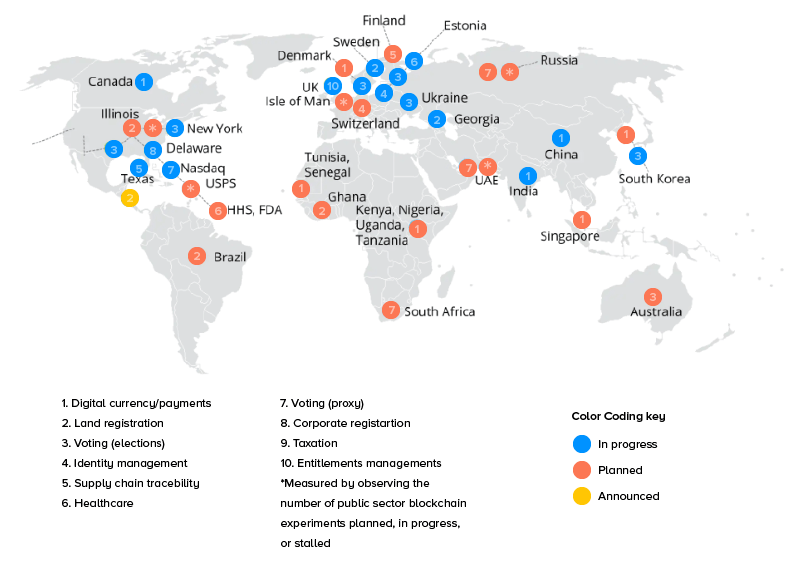 How are Governments of the World’s Biggest Economies Using Blockchain Right Now?

The efforts that the country has been taking to become the Blockchain powerhouse harnesses the energy of public and private partnerships. When focusing on the blockchain use cases in government and other operations within China’s economy, Alibaba has been working with Changzhou city to secure all the healthcare data on Blockchain, while Tencent is developing a logistics platform driven by Blockchain by partnering with China Federation of Logistics and Purchasing.

[In case you are skeptical about what blockchain means to healthcare providers, read our blog specific to the role of blockchain in the healthcare industry.]

Even after the government ban that nipped the bud of China’s plans to become a leader of crypto mining, cities of Shanxi, Shanghai, Henan, Guiyang, Guangzhou, and Hangzhou have issued programs to promote the development of Blockchain. Additionally, the Xiongan New Area is also now being developed as a Blockchain innovation hub.

The Dubai government is working with the aim to become the first to have applications of blockchain in government and public sector by the end of 2020.

They have estimated that Blockchain inclusion can help save over 5.5 billion dirhams that otherwise went into document processing alone, meaning they would be able to get back 25.1 million hours of their earlier occupied resources and engage them for improving the productivity of their economy.

In 2017, the US FDA announced that it has signed an agreement with the IBM Watson Health branch to find the role of this type of distributed ledger technology in sharing the patients’ data, safely. This partnership is aimed at addressing the absence of transparency and safety in the process of how health data is collected and passed.

The Trump Government in 2018 also gave the Department of Homeland Security the green signal to award a grant of over $192,380 to Factom, a startup which would measure the ability of the technology in protecting data which is collected through the Border Patrol sensors and cameras.

In 2018, the UK’s FSA became the torch-bearer of Blockchain’s adoption. They developed a pilot to track meat distribution in the slaughterhouses to check if they followed compliances of the food sector.

Following the success that FSA saw, a number of other bodies soon caught up –

In an effort to revive the country’s dying economy, Venezuela has also embraced the concept of development of different solutions based on blockchain technology. In October 2018, The Venezuelan President Nicolas Maduro announced the launch of Petro – a digital currency.

Coined as the first cryptocurrency issued by the federal government, Petro’s objective lies in offering a solution to circumvent the sanctions on the financial transactions and curb the black market.

Venezuelans are considered to be one of the most crypto-savvy public who are very open to the idea of transforming their savings in bitcoins that would help preserve their value via the hyperinflation the country is facing.

In order to boost the acceptance of Petro, all the government institutions have been asked to accept the coin. And additionally, the country is planning to add the token for selling oil in and from 2019.

The sentiment that India carries towards Blockchain technology is positive throughout. As per the NASSCOM 2019 Blockchain Report, nearly 50% of the states are involved in significant initiatives driving the technology’s adoption in India. In fact, the number of projects built by blockchain development services providers have crossed the $20 billion cross across multiple industries.

Moreover, according to the data shared by the World Intellectual Property Organization, India is top sixth in the list of patents happening in the blockchain space, with the total patents approval count in 2018 having reached 67.

To incorporate the power of decentralization, multiple nations are exploring the role of applications of blockchain in government and public sectors. But does it mean that the time has come for every nation to look up to a blockchain-based government model?

What Lies Ahead for Decentralized Government?

Well, what is undeniable is the fact that at a time when the global trust around the government is on an all-time low, a system that relies on transparency and facts carries a tremendous potential in shaping the economy of a nation.

But, the other undeniable thing is that the time when the adoption and impact of blockchain on government would be even more significant. While we have seen the potential that the technology carries, we can also not ignore the regulations which are slowing down its adoption.

So, a future where the Government is decentralized enough to become citizen-centric can either be a possibility or become impossible, all on the basis of how the Government reacts to decentralization and how openly they involve Blockchain, a type of distributed ledger technology, in their processes.

FAQs About Role of Blockchain in Government

1. Why Governments Should Be Using Blockchain?

2. Is There a Future for Blockchain in Local Government?

3. Which Cryptocurrency is backed by the government?

SOV is a government backed cryptocurrency and is accepted as an alternative of US dollars across the Marshall islands.