Do you remember the pre-Netflix era when you had to wait for your cable operators to stream movies? Or when you used to rent a DVD, or maybe just download it from the internet? (after battling for hours to get your hands on an unpirated high-quality content).

Well, sure it was arduous, wasn’t it? Just then, Netflix came like a knight in shining armor.

The journey of Netflix started back in 1997. Reed Hastings and Marc Randolph started this media-streaming and video-rental platform, which even they wouldn’t have thought would reach such heights of success. From offering online subscription service through the internet and mailing DVDs to providing an entertainment subscription-based online video streaming app – Netflix Inc. has done it all which was only once imagined and has nailed it.

The company has undergone radical changes since its inception, and has become one of the prime mobile apps revolutionizing the entertainment industry.

Here are some mind-blowing Netflix statistics 2021 to prove how the brand is a rightful industry leader. 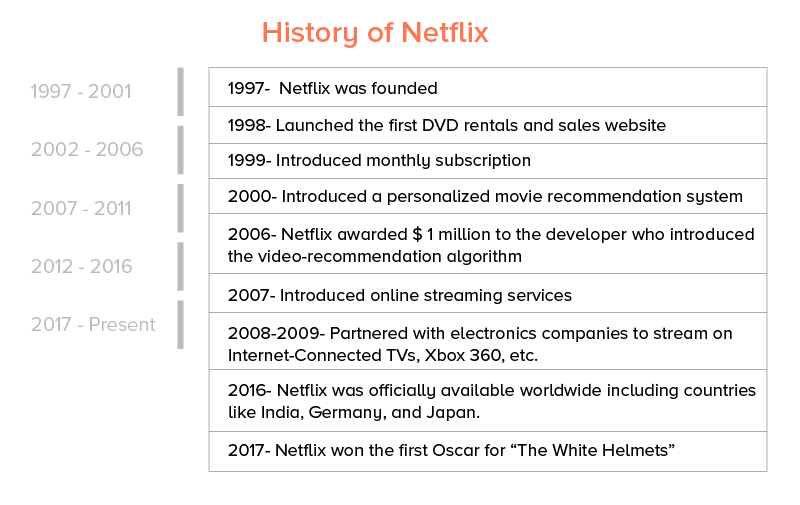 Not surprisingly at all, the Netflix revenue breakdown for the first quarter of year 2021 amounted to over $7.16 billion, up from about 5.8 billion in the corresponding quarter of 2020.

4. Netflix has $16.6B as Estimated Revenue Annually

The annual revenue estimate of Netflix is $16.6B. These Netflix annual revenue statistics show that the global reception of it is highly positive and is going to be so for the foreseeable future.

As per the reports by Yahoo Finance, the quarterly growth rate of Netflix revenue is estimated to increase by 24.2% year over year. If the company is able to maintain this pace for a few more years, it is going to be difficult for Netflix’s contenders to supersede it.

The netflix income in the first quarter of 2021 was estimated to be $1.7 billion (as shown in the graph below), whilst this amount was of 709 million in the corresponding quarter of 2020. 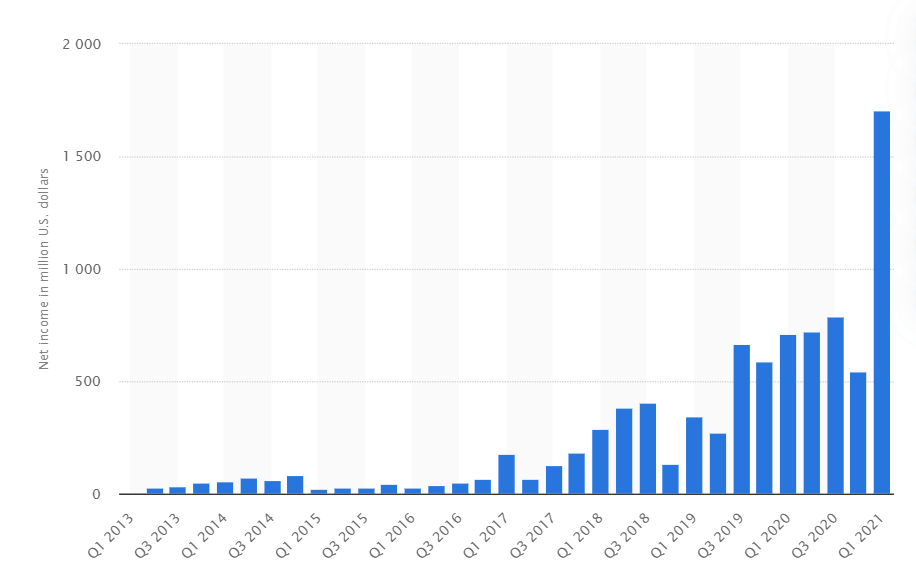 In the third first quarter of 2021, the gross profit of the company reached the amount of $3.295 billion.

The revenue of Netflix for the US in the first quarter of 2021 amounted to over 3.1 billion U.S. dollars.

The number of netflix subscribers as of the first quarter of 2021 are 207.64 million worldwide.

In the first quarter of 2019, the number of paying Netflix subscribers grew to 148 million, increasing the company’s profits – a record number that Netflix breaks every year.

11. 41% of Netflix Users Use the Platform Without Paying

12. Netflix is now Available in over 190 Countries

The entertainment service that started in the US now has expanded its horizons globally to 190 countries. As shown in the timeline above, Netflix grew slowly at first, and then all at once.

In 2020 alone, Netflix added 37 million new subscribers, over 80% of which came from outside the US.

14. Netflix Subscribers in the UK

There are approximately 16.7 million Netflix subscribers in the United Kingdom alone. With the rapid expansion of the company, and the improvements that it keeps on making to its applications is reason enough to believe that count will increase by the end of the year 2021.

Marketing charts study on the Netflix usage stats showed that 23% of the Us adults stream daily. In fact, the same study suggested that almost one in 4 US adults stream Netflix every day. On calculating this estimate into digits, we get a big amount of 58 million.

According to  Netflix user statistics, almost 37% of teenagers watch shows on Netflix daily. The report also highlighted that Netflix is 12 times more popular among youngsters than its competitors.

Netflix demographics data claims that a big chunk of Video on demand users already subscribed to Netflix in 2018 amounting to 77% of the total VoD uses. As shown in the figure below, 18-29 years old people’s group, 74% of VoD users have subscribed to Netflix, while 78% of people belonging to the age group 30-49 and 74% of users of 50-64 age group use Netflix. 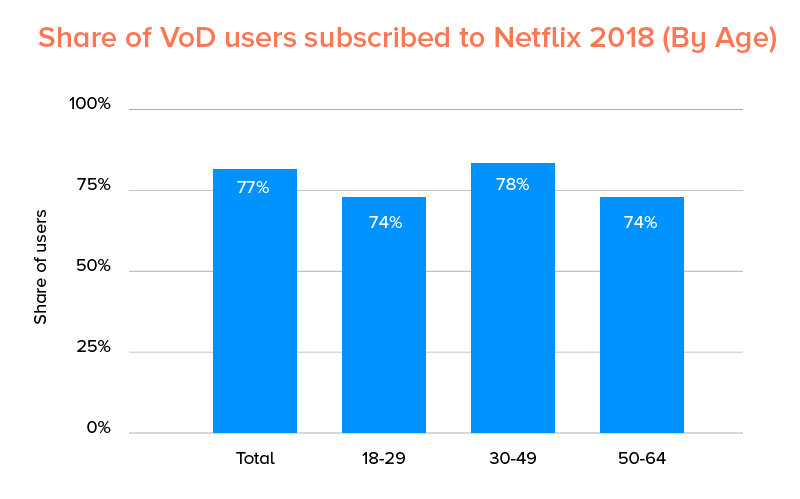 Netflix is calculated to be responsible for 8% of the total amount of time spent on watching videos worldwide. Since Netflix is now available in the majority of countries, this ratio might increase in the coming future.

A Netflix report showed that over a third of their users are okay with binge-watching shows at work. In addition, 27 percent binge while waiting for other services, and 12% have even used Netflix in public restrooms.

The exact amount of Netflix’s total viewership is estimated at over 300 million globally.

After looking at the graph of Netflix viewership statistics given above, we can clearly see that Netflix is the second most preferred entertainment app of the US viewers, after Youtube. The other two major contenders of Netflix – Amazon and Hulu seem to be way behind in the line.

24. Netflix Enjoys the Majority of the US Streaming Market Share 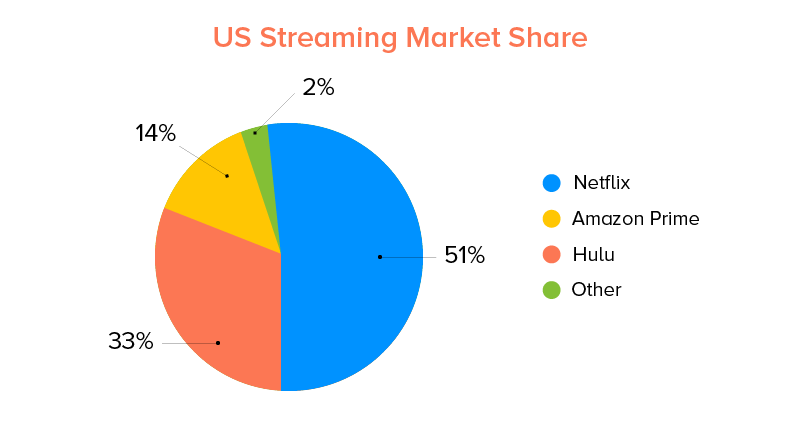 Netflix viewing statistics are solid proof that it again won the battle with its contenders. Netflix’s target market share is higher than other entertainment services as it occupies the majority – 51% – of the US streaming market share, while Amazon and Hulu are limited to 33% and 14% respectively. And this Netflix market share is likely to increase, given the increasing growth rate of the company.

25. Highest User Penetration by Netflix is in the US 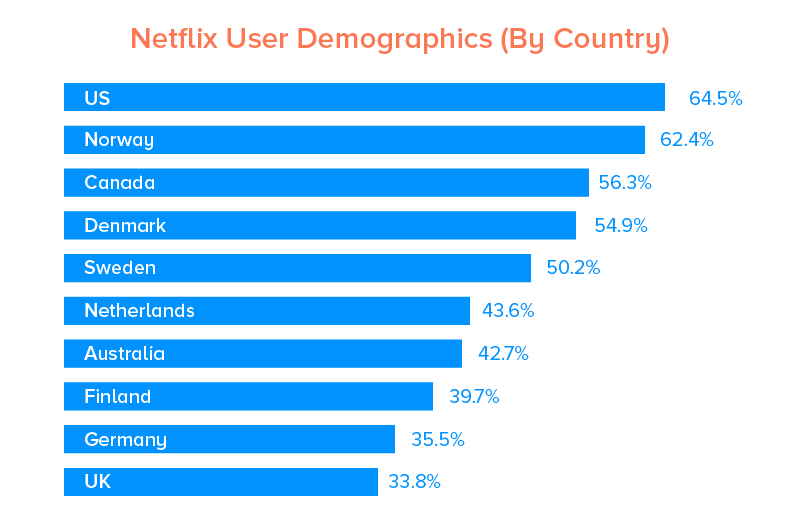 26. Total Number of Netflix App Downloads in the US

As of  2020, the total number of Netflix app installs and downloads in the US only reached 11.9 million.

The total Netflix app users who watch shows on a TV set instead of smartphones or tablets are said to comprise 81% of the total viewership.

28. Users Subscribe to the Netflix Mainly for its Originals

In a report by E-Marketer, it was revealed that approximately 58% of Netflix users buy the subscription specifically for Netflix’s original shows. This shows that starting hosting its own original shows was one of the best decisions Netflix could have ever made.

Some reports have shown that Netflix charges $0.20 per hour when the content is viewed by the target audience of Netflix app. It is not an unfair amount given that users get to enjoy thousands of movies, TV shows, and the popular Netflix originals.

A report by Fortune states that Netflix consumes 15% of the world’s internet bandwidth, which might not seem big but is a huge number.

Initially, Netflix had to pay 15% tax on the revenue generated through the App Store. However, Netflix decided to bypass Apple’s iOS Tax by stopping supporting iTunes as a method of payment for the subscribers.

In 2020, Netflix target market strategy expenses amounted to 2.23 billion U.S. dollars, less than previous years, with spending at 2.65 billion in 2019.

Now, to make things more interesting, here are some cool Netflix facts about the Netflix app. 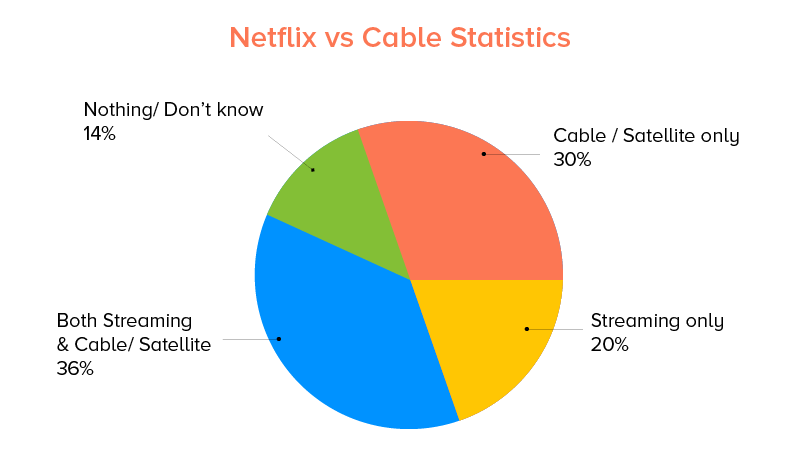 Netflix is without a doubt a dominant service in the market. A survey by YouGov of 2,000 Netflix and 1,000 Amazon Prime subscribers showed some striking differences between the demographics of the two.

Netflix target market demographics data shows that its users tend to be younger, with just 50% being over the age of 35. Whereas, only a third of Amazon Prime subscribers made it to this category.

Why Invest in entertainment app development?

To us, the Netflix statistics 2021 speak for themselves. It is astonishing how such an organization grew in stature to become one of the leading global streaming entertainment apps.

Here are some indisputable reasons for why one should invest in mobile app development that has become crucial for the entertainment industry.

Now, when users want everything on the go, providing entertainment mobile apps with streaming content is a great decision. Offering an impeccable mobile app to the users will surely increase your customer reach. With this, you can earn loyal customers and target a wider audience globally.

It is without a doubt that mobile apps have a higher engagement rate as compared to mobile-optimized websites. To be precise, the conversion rate for mobile apps can range between 100% to 300%. Entertainment apps allow users to use the app anytime and anywhere.

Keeping up with the future

As we know that the entertainment industry, or any industry for that matter, is bound to keep up with technology, it is prominent to focus on mobile apps as they are all the rage of this decade and are going to be one as well.

When the original source of entertainment seems to be expensive to the users, they try to go around and choose the pirated content. Mobile apps with reasonable subscriptions have really saved the day. Now, users can download or watch videos and movies on a single app.

Some businesses who have realized the benefits of Entertainment app development also started to play their hand at it. If you too would like to do so, then first, you need to know the cost of an app like Netflix and give it a touch of your own imagination.

A. Netflix has  207.64 million subscribers globally.

Q. What are the demographics for Netflix?

A. There are only 50% users who are over the age of 35, meaning that majorly Netflix enjoys the support of the younger generation like teenagers and  millenials.

Q. What is the net worth of Netflix?

Q. How many countries have Netflix?

A. Netflix is now available in over 190 countries.

With the help of these Netflix statistics for 20210, we took a tour into the world of Netflix and came across the absolute reasons contributing to its success.

The first sign of the digital revolution preparing to reach its climax was when the music industry saw a complete physical to digital consumption shift. What once used to be ruled by records, cassettes, and music CDs came completely on the digital platform with Apple iTunes.  The entertainment mobility event through the face of music…

Spotify Statistics 2021: What’s the Future of the Media Streaming App By Numbers

Spotify has become an undisputed leader in the music streaming industry.  The Sweden-born media service company has bridged the gap between listening to favorite songs and buying MP3 tracks online. It has enhanced the way people listen to music, across the globe.  The popularity that Spotify has found for itself can be validated by the…

OTT has become one of the most important abbreviations that you might have never heard of.  Right now it is in more than 68% of homes in the USA, i.e. two thirds of homes with WiFi are OTT homes and are used at least 100 minutes every day. It doesn’t end here. OTT is out…