In this article, we will explore what are the essential mobile app security processes that you ought to implement after the development is finalized.

Over the last decade, we all have witnessed how the mobile app development industry has grown but so have the cybercrimes. And these crimes have led us to a stage where no application can be uploaded on App stores without taking certain measures to secure it.

However, getting towards what the security measures entail, we first need to understand that why there is a need for taking these actions and what are the potential threats that plague the mobile app development industry. For a real-life estimate, let us look at the facts:

There is still more to mobile app security than safeguarding them against malware and threats. Let us first identify these threats to understand the security measures better.

Why do we need Mobile App Security: Potential Threats

The threats that present themselves in the mobile app development world although are malicious, they can be solved with simple measures. Let us take a look at what are the major risks to mobile application security.

Solution: The most crucial step in safeguarding your servers is to scan your apps with the help of automated scanners. These scanners can, otherwise, be used by hackers to dig out vulnerabilities in your apps and exploit them. Automated scanners will surface the common issues and bugs which are easy to resolve.

Solution: To safeguard Binary files, it is important to deploy binary hardening procedures. As a part of this procedure, binary files are analyzed and accordingly modified to protect them against common threats. This procedure fixes the legacy code without involving the source code at all. It is crucial for the mobile application security issues to also allow secure coding for the detection of jailbreaks, checksum controls, debugger detection control and certificate pinning.

Solution: The best way out of this threat is to build an additional encryption layer over the OS’s base level encryption. This gives a tremendous boost to data security.

Solution: To reinforce transport layer security, an SSL chain verification can be built. Along with this, you can use industry-standard cipher suites instead of regular ones. Additionally, avoiding the exposure of user’s session ID because of mixed SSL sessions, alerting the user in case of an invalid certificate, using SSL versions of third-party analytics are common practices which can save the users from a dangerous breach of security.

How to Make Your Android App Secure?

Other major security practices can include, Validation of User input, Avoiding the need for personal data and usage of ProGuard before publishing the app. The Idea is to secure app users from as many malware as possible.

How to Make Your iOS App Secure? 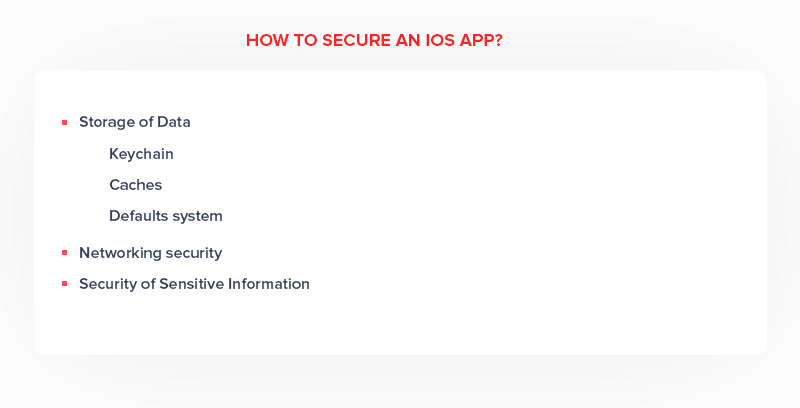 There is a proven record of how vulnerable mobile apps can be if not enough measures are taken for their security from external malware. Following are the challenges that can arise anytime if the testing is not completed as per the requirement.

There are many ways to safeguard your app, through a mobile app security audit, against the attacks from unknown sources and no amount of security measures takes can ever be enough. Mobile app security checklist is one way to go about it. Today, the digital world is out in the open for everyone’s use and no user is ever safe enough from malware and security breaches but these measures ensure that your personal data is safe in your digital devices.