Blockchain, Blockchain App, How to Guide

Blockchain in Fintech: A Catalyst for Disruption in Finance World

In the past few years, Blockchain has emerged out as a superstar technology in every possible arena – including Fintech. The technology has added another dimension in the Fintech landscape, the one that has evolved as a tech-based revolution in the financial sector. It has offered tremendous potential to the fintech industry by bringing significant changes into business models and operating processes.

This has made both startups and financial application development companies show an interest in exploring the need of  blockchain in fintech. Something about which we will talk about in this article for the next 8 minutes.

But before we dive deeper into the niche market and look into how blockchain adoption in financial services is changing the complete story, it is quite necessary for everyone to be on the same page in terms of – What is Blockchain & How does it work.

So, I suggest you take a look at our article explaining the basics of Blockchain before you scroll down. 👇

Assuming that you have been familiar with what is Blockchain by now, let’s move ahead to the Fintech challenges that this technology behind cryptocurrencies have resolved.

Companies embracing the idea of adopting blockchain in fintech

Though fintech solutions offered a sense of convenience, the actual power has been still in the hands of third-parties. The transactions are still being held with the acceptance of higher authorities only; with users waiting for getting a confirmation in their favor.

This is the first challenge that has been resolved with the advent of blockchain in fintech.

When users perform any action on fintech applications, they are not familiar with what’s happening at the other side. This creates lots of confusion and raises fear of identity theft; ultimately resulting in lower trust in the process.

Blockchain solves this fintech challenge with its characteristics of transparency and immutability.

Another reason why fintech needs blockchain is that the involvement of various third parties often delays the processes. This ultimately leads to lower satisfaction rates and higher turbulency in the business economy.

In the Fintech market, time is money. So, by cutting down the dependency on multiple people, making the process public to all and reducing the time involved, the Blockchain technology has again proved to be one of the fintech trends that can reduce the cost by nearly 50%.

While you might have got a hint of the role of blockchain in fintech in the above section, let’s cover the impact of blockchain driven decentralized finance (DeFi) in detail.

When talking about the impact of blockchain in fintech, the best way to analyze and understand the effect is to focus on the key areas of the economy. So, let’s turn towards the subparts.

There is imprudent bureaucracy and indeterminate incompetencies in most banking setups, and these concerns are majorly pervasive in the clearing and settlement domains of the banks. These gaps which are created by the sheer primal ways of banking and the involvement of hierarchy at multiple levels can be avoided if there is a decentralized system which follows different consensus algorithms for faster transactions – hence the need for Blockchain is justified here. 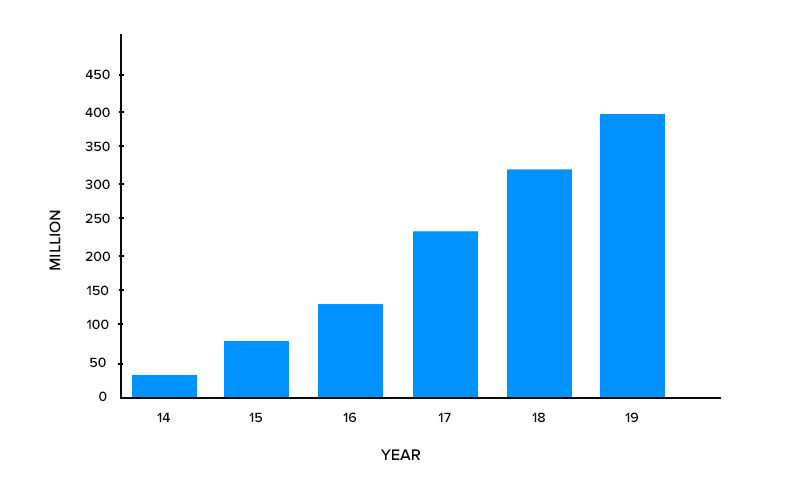 Besides, all the major and central banks across the world are contemplating the potential of introducing their own cryptocurrencies based on blockchain technology, such as the standalone cryptocurrency – Bitcoin. Since Bitcoin cannot be regulated or influenced by any sort of monetary policy, the aim behind launching the state’s own cryptocurrency is to ensure that any digital currency provided by the central banks will reduce the popularity of all the standalone cryptocurrencies. This will give the central banks absolute control over monetary policies and financial regulations. Moreover, banks are fully aware of the real benefits of digital currencies in financial services (based on blockchain technology) over the traditional ones, such as, lower transaction costs, faster transactions, etc. This is persuading all the financial bodies of the world to explore the possibility of making the shift to digital currencies and bringing blockchain-based payments into practice.

Also, the payment system as we know it today is not absolutely efficient either, which calls for an alternative way of payments in which cryptocurrencies can be fulfilled.

Firstly, we forget that the Credit card was invented before the internet and thus it has been tailored for physical payments, rather than internet payments. Therefore, internet payments through credit cards pose three major issues, consisting of – High Processing fees, fraud and security concerns. These can all be very well taken down by blockchain adoption in banking and related financial services.

Secondly, the system of international payments is still standing at a very rudimentary stage. It is a closed and compartmentalized system. International payments generally take more than a day to process and can only be achieved during the opening hours of the payment agencies because before reaching its destination, your payments will transit through multiple banking systems having their own different processes. These steps notably increase the work of cross-checking data. And cryptocurrency is the answer to this. With the implementation of blockchain in fintech and banking, the problem of cross-checking data across different organizations involved in international funds transfers will be streamlined and easily authenticated over several levels of checks.

Trade Finance is still relying on paperwork circulated across the globe for an affirmation of information, i.e., documents are still being posted or faxed. Stock and share purchase still have to pass through a hassle process of brokerage, exchanges, clearing, and settlement. This usually takes 3 days for settlement, but can be extended over the weekends since every trader has to maintain their own databases for all the transactions-based documents and regularly check this database against each other for higher accuracy.

Blockchain technology, in this fintech sector, can be used for giving traders an escape from burdensome checks of counterparties and optimize the complete lifecycle. And this way, reduce the risks associated, speed up the settlement process, and enhance trade accuracy.

One of the finest applications of blockchain in loans and credits (another form of financial services) is that it provides banks and other institutions with an easier, faster, and secure method for verifying identity and background information of customers. An example of this is how Durr, a German firm raised €750M Loan via Blockchain. And this way, prevent identity theft, money laundering, and other such issues.

This is again one of the prime blockchain use cases in the fintech sector.

With global demand for regulatory services predicted to be worth $118.7 Bn by 2020, fintech companies are adopting blockchain for upgrading the regulatory compliances. They are relying upon this technology to track each and every verified transaction and record all the actions taken by the associated people so that regulators do not require to confirm the authenticity of the record. In addition to this, the technology is empowering regulators to review the original documents instead of manifold copies.

What’s more, the blockchain’s potential of immutability is helping with lowering down the possibility of errors and ensuring integrity of records for financial reporting and audits, along with decreasing the time and cost of auditing and accounting.

Now as we know about the impact of blockchain in fintech, it is likely that you are curious to know about its future. And eventually, take the right step.

However, it is advisable to have a clarity of what all fintech companies are using blockchain technology and how, so that you can enjoy better results.

So, let’s have a look at the same.

Companies embracing the idea of adopting blockchain in fintech

We.trade, the platform developed by the IBM with 12 major European banks like CaixaBank, HSBC, Nordea, and KBC, is using blockchain as a single database that enables all the counterparties to access the same information regarding trade transactions and add a tint of security to the system.

Circle is another fintech startup that is letting users invest in different cryptocurrencies, such as Bitcoin, Stellar, Ethereum, Zcash, Litecoin, EOS, and Monero.

Another company that is disrupting the fintech ecosystem with the help of Blockchain technology is Robinhood.

The company has developed a mobile application that gives users an ease to invest in stocks, stock funds, cryptocurrencies, and more without any additional fee.

Also, the fintech company has launched a crypto platform in 2018 that let users buy and sell digital currencies, including Bitcoin, Ethereum, Litecoin, and Dogecoin.

CryptoPay is also one of the fintech companies offering the best of the blockchain based payments solutions. The company let users convert their bitcoins into US dollars, British Pounds, or Euros, send them to friends, or get a prepaid debit card to use it for making purchases. This not solely gives users ease of currency exchange, but also safeguard their money against fluctuations in the market.

LAToken is a crypto trading platform that bridges the gap between real and crypto economy. It lets users trade bitcoins globally, invest in tokenization of assets, making an initial coin offering (ICO) out of their project, and more.

With this covered, let’s wrap up this article while focusing on the future of blockchain in the fintech economy.

Talking about the future of blockchain in fintech, the adoption of the technology is increasing significantly. The blockchain-based fintech market was worth USD 231.63 Mn in 2017 and is anticipated to be valued USD 6700.63 Mn by the year 2023, with a CAGR of 75.2% during the forecast period. 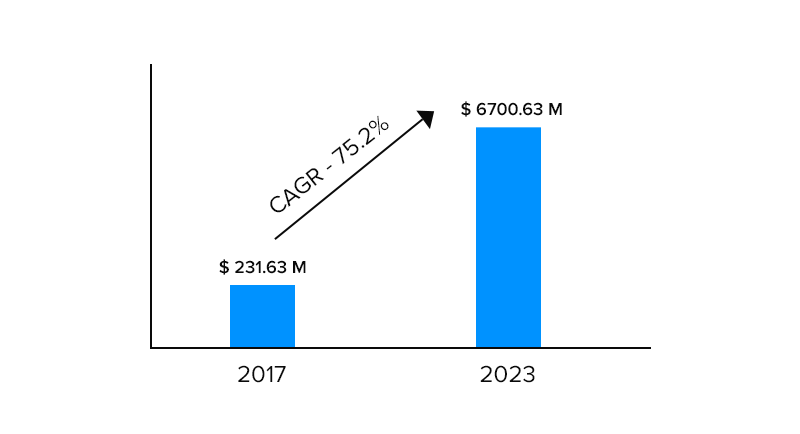 So, in case you are a fintech startup or establishment still wondering if it’s the right time to bring blockchain in your processes, act now! Contact the fintech experts to discuss the opportunities and requirements, and make a successful future.

Q. Which Blockchain platform is best for the financial service industry?

Ethereum, Hyperledger Fabric, Quorum, Corda, and Ripple are some of the blockchain platforms that can be considered for revamping financial services. However, it is best to understand the potential of each and choose the platform that boosts your business growth.

Q. How to integrate blockchain in a finance app?

There are various ways to integrate blockchain in your finance app. However, they are quite complex and tricky. So, it is advised to turn towards leading financial applications development companies with sound knowledge of blockchain for the same.