Android vs iOS: Which Platform is More Secure in 2019

While Android vs iOS war is the one that continues to break the internet, the ultimate deal breaking element for both the app users and the brands boils down to Mobile App Security.

How secure a mobile app is what determines its future in the present world where users are conscious of increasing data breach cases. But, is it something completely dependant on the quality assurance techniques that developers invest in?

Well, the answer is no.

Irrespective of how long it took to develop a mobile app or what methodology you followed in development, the ultimate result differs with various factors including, the operating system you choose.

Because of this, many developers are asking the question, “Android vs iOS: Who wins the title of higher security in 2019-20?”

When we talk about iOS vs Android security, the unprecedented winner has always been iOS, with its stringent security guidelines. But with Android Q, Google gave out an array of hope in 2019, that hinted towards it being on the verge of becoming a brand one can trust with their devices and personal information.

{Read: How much does Android app development cost?}

Will 2019-20 be the year when Google’s Android will emerge out as the secure one out of Android and iOS ecosystems?

Before we get into the Android vs iOS Security comparison 2019 lookout and let us first look at the prevalent  security difference between iOS and Android.

Here are the comparative elements that cover both the Operating System Ecosystems, comprehensively.

Android platform offers Linux Kernel and Inter-Process Communication facility, security level. Coded with Application Sandbox, the platform gives verified boot guarantee in which every stage cryptographically verifies the integrity of the next stage before their verification.

Android verifies the boots with the help of dm-verity kernel feature that makes it impossible for the compromised device to boot.

While, this was about Android, iOS offers the security level with Low Level Bootloader(LLB), iOS kernel, and iBoot. LLB is primarily verified by Apple Root CS Public Key using the Boot ROM program to make sure that the iBoot Bootloader has been signed by Apple. Next, iBoot then verifies and executes iOS kernel.

Android offers monthly updates in their Android Security Bulletin. Even though Android gives out updates once in a month, they don’t force the users to update the devices. With the option to ignore the update and operate the device in the same way, gives an escape plan to the users.

Apple rolls out several versions of security updates every once in a while in a month. Apple makes it a mandate for every user to download the most recent security update. By giving out continuous notifications, the OS makes it difficult for its users to ignore the security upgradations. Something that brings everyone to the conclusion that the winner of Apple vs Android security efforts is the former one.

While Android has recently started partnering with manufacturers who are offering Fingerprint Scan option, the number is still very limited.

This is not the case with Apple. Apple has always been very particular when it comes to biometric verification on their devices. It is not just for Touch ID, Technologies like Iris Scan and Face ID have also been coined by Apple first. The OS giant, keep investing millions in the security focused technologies.

Unlike Apple, security issues related to Android hardware depends entirely on the manufacturers. While some are good at keeping a handle on the fact that all the Android’s built-in features related to security work well on their device, others might give it lesser priority.

On the other hand, Apple has full control over its hardware security. This makes it undeniable to think that iOS will win the iOS vs Android security 2019-20 comparison.

The greater the fragmentation, the greater the chances of introducing loopholes that are a comfortable space for heightened hacking and data breach incidents. By keeping both its device and operating system version on a lower side, Apple reduces this probability by manifold.

But the case is not same with Android. Both – number of device variants and OS versions is on a very high side in the platform, giving an open ecosystem to hacks and breaches to breed in.

Apple undoubtedly has greater control on the apps that come for approval and their updates. The brand takes its right to vet, reject, and remove every app that doesn’t meet its criteria, very seriously, the fact that has brought in a demand for such iPhone app development companies, which can develop apps that don’t get rejected.

Google, for a long time, overlooked the necessity of following stringent rules while approving an Android app. But, now it has taken major steps.

Besides encouraging developers to focus on security in Android app development, Google employed Machine learning to detect and remove malicious applications from the Play Store in 2017. And now, it has announced that the approval time on Play Store will be high, so that every piece of the application could be tested thoroughly before making it live.

However, since Android is an open ecosystem, which emerges out as a bliss for both users and hackers, the impact of these actions on security breach incidents is low. After all, apps can be downloaded from stores other than the Play Store.

While this is the picture that has always remained, what does 2019-20 looks like for the two OSs on the security front? 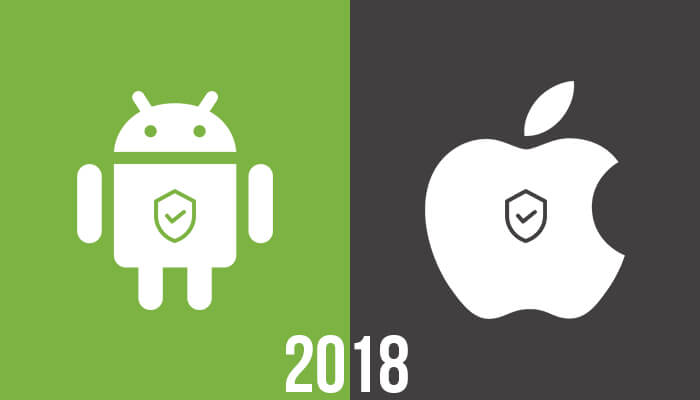 In an article concentrated on iOS vs Android security comparison, it is very important to look at the matter with all specificity.

The fact that the Play Store is so much wider than App Store comes as both a blessing and an issue. While on the one hand, the wideness gives Android users a wide option to select from, it also gives the hackers a great opportunity to leave malware apps in the crowd of millions.

Apple, on the other hand, keeps a close look at the App Store. The level of inspection that every app needs to go through while reduces the available option for the users, lowers the chances of malware attacks to minimal.

This come up as a reason why the iOS versus Android war is always won by the former.

Android, undoubtedly holds a massive share of the world smartphone market, a number that is practically impossible for Apple to ever cover.

Now greater the platform popularity, greater is the number of users attached and thus greater are the chances of a security breach.

However, it is not sound to give Android lesser points in terms of security just on the basis of its high popularity. Because with the growing number of users, the Android app developer community has started giving greater focus to introducing the best mobile app security practices and deliver a hack-proof app.

If there is one reason why Android is 100% lying behind Apple in terms of ‘Android vs iOS security’ is the hacks caused because of high device manufacturer count.

Because different devices come with a different focus on Security protection features, it is impossible for Google with thousands of devices under its umbrella to lay out a common set of protocols for every single one its partnered OEMs. A problem which Apple never has to face because of its concentrated control on the device manufactured.

Both the operating systems make use of very similar security features for keeping their users safe but while Apple keeps a close watch on the source code and has functionality like SSL Pinning in iOS, the open source nature of Android makes it difficult for the OS to do so.

To solve this gap, Google has not just employed hackers to identify the source of attack but is also increasing its bounty that the brand is willing to pay for those who report new vulnerabilities, year on year.

While on the Apps front, hoping to get a clearer sense of security in the Android, Google has introduced ‘Google Play Protect’ in Play Store. This element that entered the market with the advent of Android O behaves like a virus scanner for the Android apps, ensuring that harmful content does not get downloaded on your device, a move that has come as a major relief for Top Android App Development Companies that have been crumbling under the growing malware attack prevention pressure.

Even though Google is getting online with its Play Store Security, the story of its device update is rather on the down side.

The brand will continue to push out its Android Security patches month-by-month. But while Pixel and Nexus users might get the updates on the spot, other phone manufacturers might continue to delay or even skip the updates completely.With thousands of Android devices running years old software, they will continue to be vulnerable to major hacks such as Stagefright and Heartbleed.

2019-20 will see speedy updates taking a prime position, with the past year witnessing some of the major security breaches,(remember what happened with Uber Data Breach?) placing security breaches on the forefront. If you don’t have a stock device, Android is already behind in the update world.

Apple, on the other hand, has been working on continuously taking security to the next level in 2019, especially with its Touch ID and the FaceID. The stringent oversight that the brand has on its apps added to their ability to send out updates to their devices quickly has given the brand a sure-shot edge over its competitor. The brand even take measures to encrypt all the data in the iMessage and Apple’s other apps.

While Android also encrypts some data, but users’ privacy will continue to be protected to a very little extent. To make its marketing efforts better and to offer superior AI experience, Google will continue to mine data for information in 2019.

In spite of the fact that Android will be introducing new features on its Security front in 2019, iOS will win the title of iOS vs Android security comparison this year too.

Q. Which is better iOS or android?

The answer to this question depends entirely on the factor you are focusing on. If you consider customization, Android is better than iOS. But, in the case of security, Android lags behind iOS despite putting the best effort into place.

Q. Who is more secure Android or iOS?

Though both Apple and Google are coming up with the best privacy and security practices, Apple’s iOS is still leading the show  iOS has 20% less critical vulnerabilities than Android, according to mobile security statistics.

Q. Which is easier to hack iPhone or android?

Since Android runs on the hardware designed by different manufacturers and is an open ecosystem, it is easily hackable when compared to iPhone.

Nitin Agarwal
Let's connect!
In search for strategic sessions?.
Let us understand your business thoroughly and help you
strategies your digital product..
Book a session →