Top 15 best database for web applications to Use in 2022

Digital transformation, regardless of whether a private venture or large organization, has empowered companies to produce information at every touchpoint. Irrespective of the organization, each organization requires a database to sort out and store its fundamental data. To provide such a facility, the database management system software is to the rescue.

A database can be referred to as a room inside an office where all the essential information and reports are stored. The information which gets stored is extremely sensitive, hence we have to be ultra-careful while we access the information in the database. The data stored can be later extracted and data visualization can be used to derive useful outcomes from it.

With the ascent of Microservices, Cloud, Distributed Apps, Semi-Structured Data, Big Data, Low Latency Data and so on, the customary SQL list of most popular databases are currently joined by different NoSQL, NewSQL, and Cloud databases.

Stating the wide use and popularity of different types of databases in responsive web development applications, here are some facts about the best database for web apps in 2022 or upcoming years:

According to reports by business.com, 91% of companies with more than 11 employees use CRM software.

A report by Nucleus Research states that 65% companies that are using mobile web development CRM are achieving their sales quotas.

According to Future Market Insights, the mobile CRM market is expected to grow at an approximate CAGR of 13% over 2019-2029.

Now, let’s dive deep into the types of popular databases for web applications.

Which is best Database for web applications In 2022?

Oracle is the most widely used commercial relational database management system, built-in assembly languages such as C, C++, and Java. This database’s most recent version, 21c, contains a slew of new features.

Oracle is the database management system that stands above the others. Overall, it is the most extensively used RDBMS. It takes up less space and processes data faster, and it includes several new useful features such as JSON from SQL.

MySQL is written in C and C++ and uses a structured query language. MySQL 8.0 is the most recent version of this database, and it includes a better recovery option. The best SQL database comes in a variety of editions, each with its own set of features. 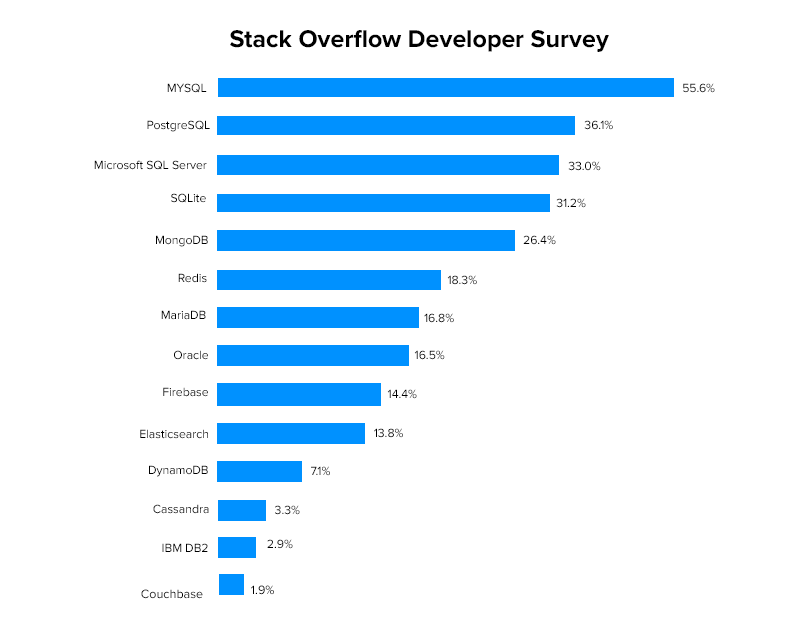 Microsoft provides great toolset support for one of this best database software, both on-premise and in the cloud. It’s attuned well with Linux and Windows systems. MS SQL is a multi-model database that supports Structured Data (SQL), Semi-Structured Data(JSON), and Spatial Data.

It is not as inventive or advanced as other modern list of popular databases, but it has undergone considerable improvements and overhauls over the years.

POSTGRES was the initial name of the database. Michael was also honored with the Turing Award for his contributions to PostgreSQL.

When it comes to most popular databases to use in 2022 through a NoSQL database, there are a few things to consider. MongoDB is the first Document Database management software that was released in 2009. It is challenging to load and access data into RDBMS using object-oriented programming languages which also require additional application-level mapping. Thus, to overcome this problem, Mongo was developed to handle Document Data.

IBM also offered DB2 LUW for Windows, Linux, and Unix. DB2 11.5 is the most recent release, and it speeds up query execution.

The list of databases for mobile apps supports the relational model, but it has grown significantly in recent years. It now supports object-relational features and non-relational forms such as JSON and XML. 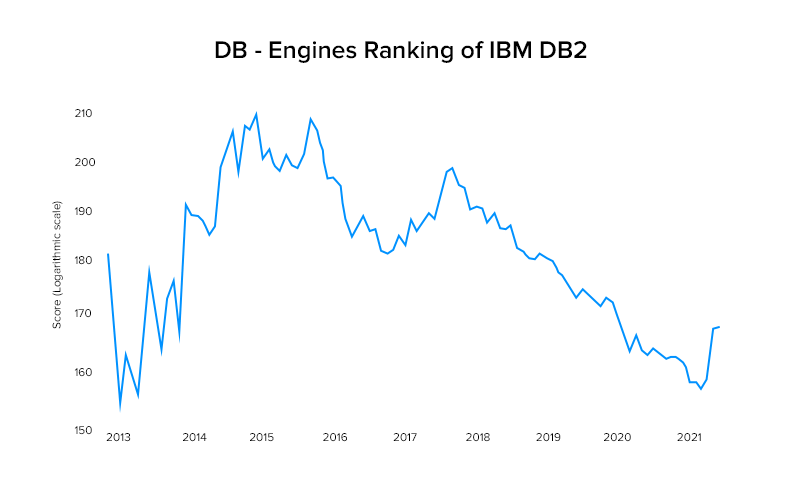 It is a popular open-source database project. According to Stack Overflow’s Annual Developer Survey, Redis is ranked as the Most Loved Database platform. As a distributed, in-memory key-value database, it can be used. Redis can also be used as a distributed cache and message broker, with durability as an option. 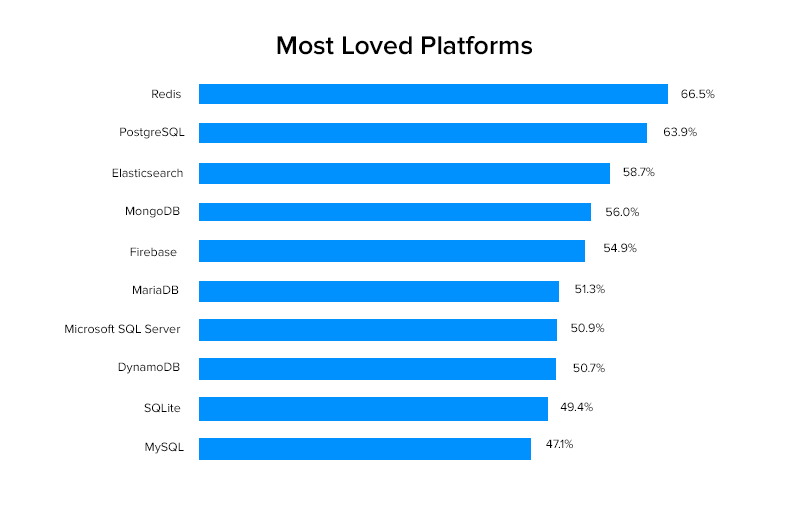 It provides horizontal scaling via automatic sharing and REST API. It also supports structured and schema less data (JSON), which is especially suited to analyze Logging or Monitoring data.

It is an open core, distributed, wide column store and commonly used database for an application that was developed in 2008. This is a highly scalable database management software that is widely used by the industries to handle massive data.

One of its main features is its decentralized database (Leaderless) having automatic replication and multi-data center replication, leading it to become a fault-tolerant base without any failures. Cassandra has several different operations and infrastructure. Cassandra and HBase databases go a long way and have different use cases according to their types.

It is a Relational Database Management System which is compatible with MySQL Protocol and Clients. The MySQL server can be easily replaced with MariaDB without requiring any code changes. 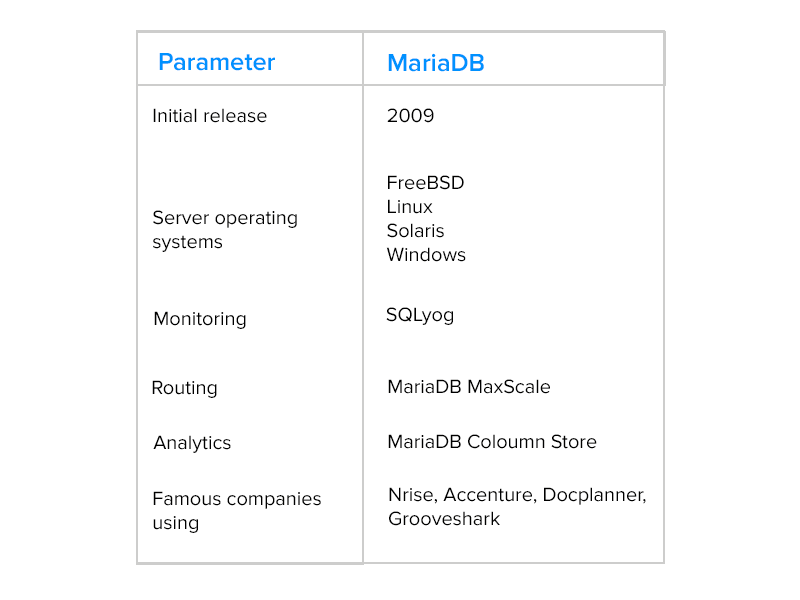 OrientDB is an open-source database with NoSQL multi-model database program that enables businesses to leverage the capabilities of graph database management software without having to build several systems to handle different data types.

It is a management solution with support for graph, document, key value and object-oriented database models that improves performance and security while also allowing for scalability. 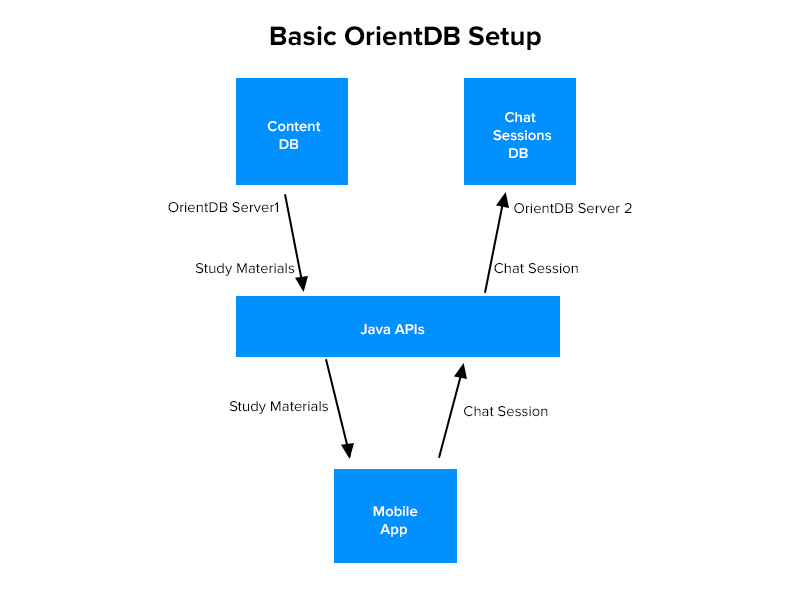 SQLite is an open-source best SQL database with an integrated relational database management system. It was created in the year 2000. It’s a top database that requires no configuration and doesn’t even require a server or installation. Despite its simplicity, it contains many commonly used database management system software functionalities to be used in mobile web development like react native.

DynamoDB is a nonrelational best database from Amazon. It is a serverless database for mobile apps that scales up and down automatically while also backing up your data.

Neo4j is an open-source, Java-based NoSQL graph database that was launched in 2007. It uses a query language known as Cypher, labeled on its site as the most efficient and expressive way to describe relationship queries.

In this database management system software, your data is saved as graphs rather than tables. Neo4j’s relationship system is quick that allows you to create and use other relationships later to “shortcut” and speed up domain data as the need arises.

This best free database for web applications has upgraded the multi-platform RDBMS. From firebird memberships to sponsorship commitments, it offers a variety of financing choices.

What Is The Easiest Database To Use?

Database software tools power pretty much every application you can consider. But here, the query is truly for which purpose you’re looking for. For example, at university, we train novice students about best database for web applications and software using Microsoft SQL Server. When they ace the database essentials, they can without much of a stretch progress to MySQL and Oracle.

While most databases for mobile apps are the same, it is fundamental to become familiar with the basics of most popular SQL databases and explanations since they can be applied easily to most and popular database systems. It would be better for you to learn it by composing SQL statements first as opposed to utilizing a GUI approach.

When you understand the key ideas, you’ll see that it’s such a simple way to apply them to any database management software utilizing any IDEs, GUI included.

Which Database Is Best For Python?

Here we will talk about one of the best databases for web applications: SQLite

SQLite is likely the most clear database and the most popular SQL databases to connect with a Python application since you don’t have to install any external Python SQL database or type or SQL database modules. As a matter of course, your Python installation contains a Python SQL library named SQLite3 that you can utilize to connect and interact with an SQLite database.

Database for mobile apps is considered to be the cornerstone for software applications, and is something without which an organization cannot thrive.

If you want any assistance on type of SQL database and app development, then contact us as we are are one of the top web development company in USA that crafts scalable applications and delivers impressive results on desktop and mobile devices.

Hope this list of the best database for web apps in 2022 has cleared your doubts regarding its usage widely.

Are you a budding entrepreneur looking forward to kickstarting your digital business or an enterprise looking to enhance its online presence through a well-performing website? If yes, you have landed at the right place. Being one of the most powerful marketing channels, a website can drive higher sales and enhance customer retention. It can further…

The top API security risks and how to mitigate them

Powered by a massive rise in microservices and the constant push to deploy applications quickly, APIs have become a go-to name for every entrepreneur.  However, with every small feature getting linked with other software or products for a seamless user experience, APIs are increasingly becoming a hub for security hacks. So much so that the…

In little over a decade, Node.js has emerged as a top-developer choice for web application development. Its pros make it a superlative alternative for cross-platform development by integrating a 2-way client-server communication channel. Without plunging into the technicalities, let us know the top Node.js development statistics that substantiate its superiority over the competition:  Node.js is…