Explained: What are Stablecoins – The Holy Grail of Fintech

With over 200 cryptocurrencies presently operating in the market, Blockchain is prepared to become the utopia every business and government is looking for.

The digital coins were conceived and then birthed to one day replace the issues associated with the fiat currency (like USD, Rupees, and Euro). With non universality, stark difference in currency value between one nation to another, etc. being some of those issues.

While theoretically fit to be the ideal money, cryptocurrencies had a singular issue that kept (and are still keeping) them from becoming the universal currency. VOLATILITY.

Lying right next to Hydrogen in the volatile chart, cryptocurrencies are notoriously famous for changing in valuation every passing minute. While thrilling for the investors, they are not logical for time based contracts.

Imagine, you are employing a worker on a daily wage mode. On Day One, you are paying him 2 BTC, which is equivalent to 50 USD, now suppose the value of 1 BTC increases to 50 USD, you will now be paying him extra. And this can go the other way as well. The price might cut down in exact half.

This situation you read above is what the effect of volatility is.

Now, noting cryptocurrency’s other benefits, the industry started seeking a solution that would combat this issue.

Enter the profound importance of Stablecoins.

The idea of a price stable cryptocurrency has been doing the rounds for quite some time. Also with this there is an upsurge in the stablecoin use.

The stablecoin definition lies in its working.

The price of Stablecoins are pegged {verb: fix (a price, rate, or amount) at a particular level} at a one-to-one ratio to universally accepted assets like the U.S. dollar or Gold, held in reserve as collateral.

Since they are pegged with an asset, they maintain a steady price. By doing this, they have become a major liquidity source in the volatile cryptocurrency market. The use of stablecoins can be seen with investors using them to buy other cryptocurrencies on the crypto exchanges which do not accept fiat currencies, and also as a place of saving funds when the crypto market is going through heavy price fluctuations.

With the answer to what are stablecoins and what makes them a part of the future of cryptocurrencies now with you, let us head on to the types of stablecoins. 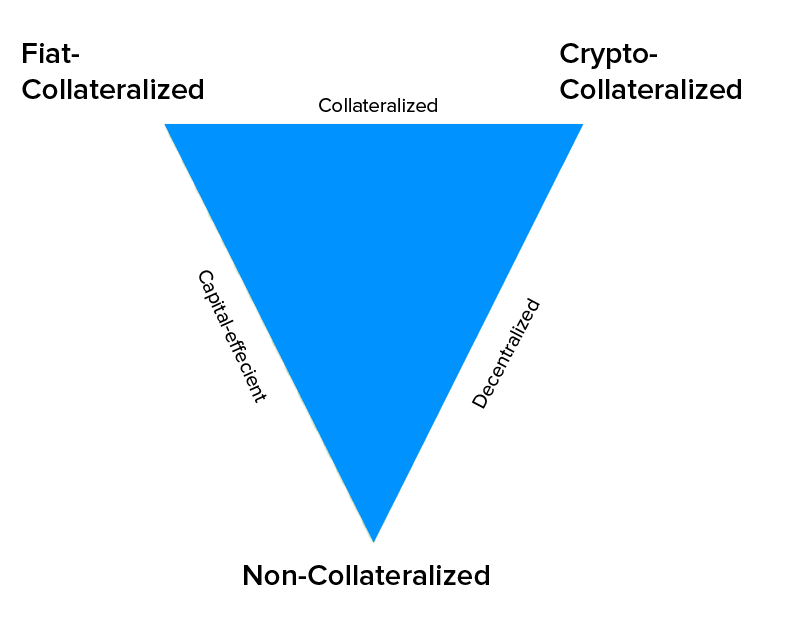 This type is what massively defines what are stablecoins.

These stablecoins are issued with respect to a fixed ratio pegged to the fiat currency. Here, the amount of issued tokens must be in 1:1 ratio with the total cash amount in vault or bank.

For example, 1 stablecoin would be equal to the value of $1. So, for issuing 1 stablecoin, $1 will be kept at a central custodian such as a bank. This way, if your 1 stablecoin = $1, you will be able to pay your employee 25 stablecoin as daily wages (which would be equivalent to $25).

Likewise, instead of issuing $250 for buying 5 Bitcoins, you will be able to use 250 stablecoins.

The point in all this being that the 1:1 ratio must be maintained at all times.

But by giving the authority to handle the process in the hands of centralized entities with their own governance protocols, doesn’t fiat-collateralized stablecoins goes against everything that Blockchain stands for?

After all, if the control is with a center body, how is it decentralized?

The same question was asked by many. The answer which the industry got them, was the Type 2 of stablecoins.

The idea is simple. By moving away from the fiat currency, we can remove centralization. By backing stablecoins with other cryptocurrencies instead of say USD, everything will be on Blockchain.

And the peace will be restored.

There is only way to solve this Catch 22 (noun: a dilemma or difficult circumstance from which there is no escape because of mutually conflicting or dependent conditions.) : Over Collateralization.

Let us explain this with an example.

Suppose you take a bank loan, keeping your house as mortgage. The bank now has a guarantee that even if you are unable to return the loan amount, it will take your property.

In this case, the home is cryptocurrency and the loan amount is your stablecoin. If you want to get 5 stablecoins issued, you will first have to deposit 50 bitcoins. This way, there is enough scope for absorbing price fluctuations.

In the worst case scenario, if the price of your pegged cryptocurrency falls too down, the stablecoins will be liquidated (a process that will be governed by smart contracts).

As an idea, crypto-collateralized stablecoins are cool. But they come with some deal-breaking disadvantages.

A. they are more volatile than fiat-collateralized stablecoins.

B. they can be destroyed spontaneously. When the price of your pegged cryptocurrency lowers heavily, your stablecoin will get liquidated into the crypto. E.g: suppose the value of your 50 Ethers, continuously decline, the value of your 5 stablecoins will eventually get merged and destroyed and you will be left with only 45 Ethers (50-5= 45).

As you dive deeper into this world, you will begin to think, do we need collateralization, at all? After all, if the US was able to move off the gold standard and no longer be backed by any underlying asset, why can’t your stablecoin do the same?

This brings us to the Third Type.

The arguments made by F.A. Hayek in the 70s says that a privately issued, non-collateralized, price-stable currency would challenge the dominance of fiat currencies.

Now, ensuring that price stability happens, is what Robert Sams’s Seigniorage Shares scheme is based on.

According to the scheme, there should be a smart contract that works on one monetary policy: ensuring that an issued currency will trade at $1. And how does that work, you ask?

Suppose your stablecoin is valued at $2. This means, the supply is low and demand for the coin is high. To solve this, the smart contract will create new stablecoins and then auction them in market. This will bring the demand and supply to one point and the value will come at $1.

Now what if the coin value is $0.50. How will you lower the supply?

There’s one way to do it: purchase the stablecoins and lower the circulating supply.

Non-collateralized stablecoins are ambitious. But it comes with several unanswered questions: How much downward pressure would the system take? Won’t whales play around the system once it starts declining? These questions make the whole system prone to sentiment based price swings and panics.

Seeing all the stablecoins from a logical standpoint, it is safe to say that none of them are “Ideal”. On a rough level, here is what an ideal coin which addresses all the challenges of stablecoins would look like –

Even while we are waiting for the industry to come with its own version of ideal stablecoin, what cannot be ignored is their benefits. Going by the concept and the working use cases of stablecoins (the list is shared later in the article), they have what it takes to be the bridge that fills the gap between digital and fiat currency.

But prior to knowing how are stablecoins used, it is necessary to know their importance.

These benefits of stablecoins are what majorly makes up for the answer of what are stablecoins:

213 stablecoin projects are estimated to have come into existence ever since the launch of the term back in 2014, with the current stablecoin market cap being $3,197.89 USD. While not all of them saw the morning sun, the number of stablecoins operating and in plan is not less.

With brands like Walmart and Facebook entering the stablecoin game, the market is poised to be on a steep rise. And so would be the increase in confusion of which stablecoin is the best.

Bitspark has done an amazing job at explaining the features set of each of the stablecoin and the blockchain that supports them. But, you should take the list with a grain of salt, simply because the market is on a growth spur. Meaning, there is no guarantee that the names which are in list today will be here tomorrow.

At this note, it will be worth mentioning who all are issuing the stablecoins, now or in the time to come.

The purpose of stablecoins is a lot bigger than enabling financial contracts or being a transparent & semi-stable way for traders to trade. It is the evolution of money.

It is the new money that will be controlled algorithmically, in the absence of any political stimulus. It would simply serve the use of being an advanced medium of transaction and as a unit of account that we have in human history.

And so it is imperative that we prepare for the limitations of stablecoins and get it right.

Standing on the same parallel grounds as the idea of John Nash’s ideal money, stablecoin has what it takes to become a global money standard – one that is similar to the standard measure, like the metric system. It has given us a way to develop a decentralized currency which promotes price stability.