Rising Growth in the Use of StableCoins

The desirability of new forms of money as a store of value and a means of payment will determine their adoption. Stablecoins, for example, are a far cry from the old standbys of currency and bank savings.

While the benefits and drawbacks of stablecoins are debated, their popularity is undeniable. Coins worth more than $113 billion have already been issued. The question is what should be done about them, and who should be held accountable. Stablecoins may be a logical progression of the blend of public and private money that we have relied on for generations, according to responses that range from claiming that the current system is OK to boosting CBDC research. 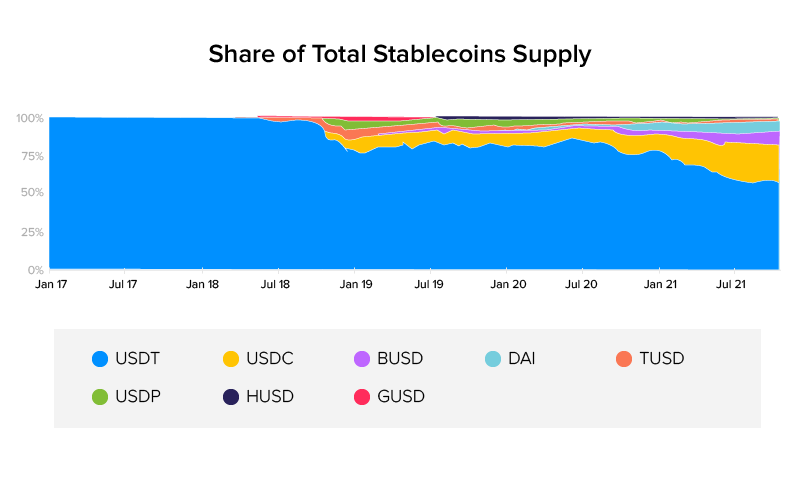 How Are Stablecoins Used?

There are many questions that come to one’s mind and the most asked one is why use stablecoins? So to understand this one should know that stablecoins are a quick and a better priced alternative to trade crypto against fiat currencies, providing for more liquidity. Theoretically, they’re also less susceptible to market price changes than other cryptocurrencies.

Crypto lending also makes use of stablecoins. Depositing USDC in a savings account with Coinbase, one of the firms behind the stablecoin, will earn you a 4% yearly interest rate. The interest rate on USDT deposits are from 1.66 percent and 13.5 percent.

There has been a lot of talk among blockchain technology companies regarding stablecoins recently, and it can be overwhelming at times. The following are the major reasons for the use of stablecoins that we will be talking about.

Reason For The Increasing Use Of Stable Coins

Tether Under A Cloud

Tether, the cryptocurrency business behind the digital token, has, on the other hand, been beset by regulatory concerns.

Tether was the first stablecoin, created in 2014, and several subsequent stablecoins are modelled after it. For every dollar deposited, users receive one token. The tokens can then be converted back into the original currency at any time at a one-to-one exchange rate, in theory. 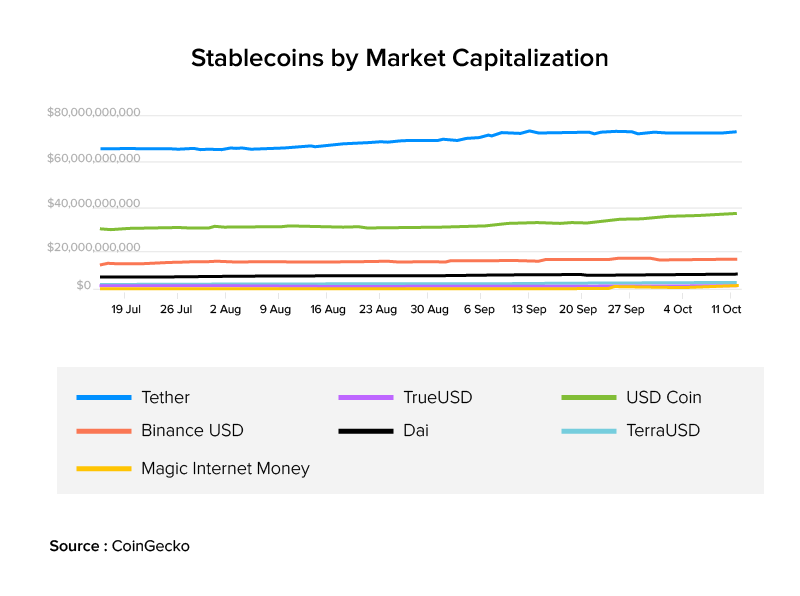 One of the benefits of stablecoins is that they may be used with blockchain-based smart contracts, which, unlike traditional contracts, do not require legal permission to be executed. The parameters of the agreement, as well as how and when money will be transferred, are automatically dictated by the software code. Stablecoins crypto can be programmed in ways that dollars can’t.

Stablecoins are being used in lending, payments, insurance, prediction markets, and decentralized autonomous organizations (companies that function with little or no human interference) thanks to smart contracts.

The rising popularity of stablecoins crypto boom will serve as a major driver for the widespread adoption of stable cryptocurrencies with a mainstream medium of everyday transactions and other applications.

While many stablecoins remain claims on the issuing institution or its underlying assets, and many also provide face-value redemption guarantees (a coin purchased for 10 euros can be exchanged for a 10-euro note, just like a bank account), government support is not present. Privately, trust must be built by backing coin issuance with safe and liquid assets. And, in most cases, the settlement method is decentralized stablecoin, using the blockchain model.

The attractiveness of stablecoins as a mode of payment is their strength. The potential benefits of low prices, global reach, and speed are all enormous. Furthermore, stablecoins, unlike banks’ proprietary legacy systems, could allow for smooth crypto payment systems of blockchain-based assets and can be embedded into digital apps due to their open architecture.

Stablecoins, by definition, make economic markets more competitive. Rather than relying on centralised banking, fintech companies can create their own stablecoin, use an ACH API to facilitate the transaction, and send money internationally.

Stablecoins crypto are becoming more popular as a means of exchange. Stablecoins make sense for cross-border crypto payment systems and global remittances because of their ease of usage for foreign transfers.

The Office of the Comptroller has also approved the usage of stablecoins by banks alongside CBDCs, indicating that stablecoins have a one-of-a-kind potential to be established and its market regulated by federal financial regulators. While this may reduce the decentralized stalin nature, it also raises public interest in stablecoin use and promotes competitive economic marketplaces.

This asset provides a viable option for open banking to arise because of decentralized finance banking mixed with the stability of stablecoins. Open banking depicts an overall economic system in which third-party applications provide access to and control of banking and financial accounts, implying that there is less centralised control over financial transactions and greater outsourcing of money activities is possible.

Decentralized banking allows more financial organisations to operate without the need for a centralised physical presence. These institutions rely on third-party partners to provide security, financial compliance, and the capacity to outsource and mitigate risk in order to maintain financial compliance.

More money is in the hands of more individuals thanks to open banking. More people than ever before have access to the internet. More people will be able to buy digital currencies, find creative ways to climb out of poverty, and avoid the restrictions imposed by national fiat currencies as access levels rise.

In the past, the most stable currencies were those that were tied to an underlying asset, such as gold.

The US dollar is today’s gold standard’s replacement. The dollar is tied to at least 14 currencies. The countries that issue them rely on the dollar’s worth to keep their own currencies from becoming unstable enough to destroy their economies.

Stablecoins, on the other hand, aim for little or no volatility by being linked to stablecoin price assets like the US dollar or gold. Stablecoins achieve price stability through a variety of approaches. Stablecoins are broadly categorized into three groups:

Stablecoins may provide the best of both worlds: a decentralized, anonymous, and worldwide payment method similar to a cryptocurrency, as well as consistent valuations similar to a stable fiat currency.

While stablecoins are becoming increasingly popular, the growing number of new launches and the variety of unique collateral methods used to maintain stablecoin price stability may result in a variety of outcomes and levels of success.

Each type of stablecoin has its own set of advantages and disadvantages, and none of them are flawless. However, the value and stability they may give to businesses and individuals around the world — by allowing universal access to established national currencies, facilitating payments and remittances, and supporting developing financial applications — could be disruptive.