Role of mHealth Apps in Healthcare Evolution from 1.0 to 3.0

Healthcare as we know it, is one of those industries that has transformed 180 degrees from what they stood for ever since human evolution. What started with herbs and prayers has drastically evolved into something so advanced that now it has seamlessly planted itself in not just the nearest clinic but even inside our bodies. All of this has been growing alongside the developments in technological advancements.

With every passing minute, technology has and will continue to take part into making help come closer.

One of the mediums through which the industry has found a place in our every waking moment is through healthcare apps. With technology finding a dominant position in the medical industry, our world has been seeing a number of solution-oriented top healthcare software developer coming into existence. These establishments have made it easy to bridge the gap between technology and wellness.

Mobile apps have bought everything – from diagnosis to post care and emergency services to our fingertips. However, we will get to the apps contribution in a while, let us first look into the marvels that technology, as a whole, has brought into the Healthcare and Medical industry. 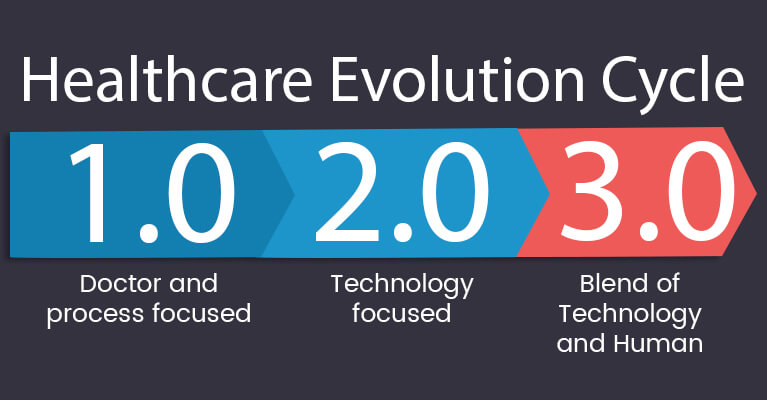 Healthcare 1.0 or The Healthcare of the past as people call it by, was a time when the industry was dominated by paper records, non-experimental, fixed set of practices and treatments. The era was concentrated on the human side of the healthcare as compared to the technological.

The abundance of paperwork and the human effort involved in every process from admission process to post-treatment formalities, is what lead the Healthcare and Medical industry to move from the Healthcare 1.0 era to Healthcare 2.0.

Although introduced as a concept that would encourage streamlined process and less human efforts, Healthcare 2.0 instead has today become a version that has reduced the human interaction to an extent that now technology has taken the dominant seat in every process.

This lack of human connection in an industry that depends greatly on empathy and doubts is what has now been laying the foundation of Healthcare 3.0. To establish the lost touch of human connection, while embossing technology in every process is what has led to a growing prevalence of healthcare service based mobile apps. These are designed to be an intermediary between the patients and doctors, thus serving their purpose of being an enabler as compared to a dominant element. These apps are usually focused on acting as a bridge between today’s technologically sound users to their technologically sound healthcare providers’ counterparts.

mHealth apps are being used by the industry as both an enabler between the patients & doctors and/or the institution and in its Augmented Reality mode, as a medium for doctors to explain complicated processes to their team and the patients alike.

In addition to that, mHealth apps are now being seen as ones that are advantageous to both – Patients and Hospitals/Doctors. A few of the features that are setting mHealth apps as the proof of technology enabling the Healthcare industry, from both user and doctors/hospital perspective are –

Patients’ records management is one of the most time consuming and crucial tasks in a hospital. Keeping a track while extracting the record on a moment’s notice is something that is of highest priority when it comes to an industry that has emergency and promptness in its foundation.

Introducing an app that is focused on patients records management in the system, is something that all leading hospitals would swear by.

There are a number of situations that happens in a medical establishment that cost them money. From patients missing their appointments by losing their way first in finding the hospital and then in the onboarding process, costing the hospital money, to sending post care instructions or booklet to every patient, there are a various little ways that together add on to the expense sheet of a hospital.

More often than not, mHealth apps can solve a number of issues that increases the cost accured by hospital.

By streamlining the processes to a great extent, mHealth apps are of great help when it comes to saving the time that one spends with hospital formalities and getting their appointments.

Some of the major tasks like creating and managing databases, sending care and post care flyers, managing appointments, and hospital onboarding are cut down by massive numbers with the help of mHealth apps.

One of the biggest contributions of mHealth apps in the industry has been in the field of reducing the number of medical frauds. With every data from health practice related to medicine information, and financial details are now kept transparent between the patient and the hospital administration.

With the onset of apps that lets you track your health, reminds you to take pills, drink water, checks your cholesterol levels, and even those that keep a tab on your sleep, it has become much easier for people to know their health status and when they need to consult a doctor. Moreover, it has led to a new evolution of technology in home healthcare.

Today, not every situation is made a concern situation, solely because of the fact that people have now become more educated both in terms of medical terms and their severities.

Fitness and Health apps have transformed the Healthcare Diagnostic industry around the world. Based on the different services they offer, the mHealth market have been divided into categories corresponding to their individual revenue generation scope. 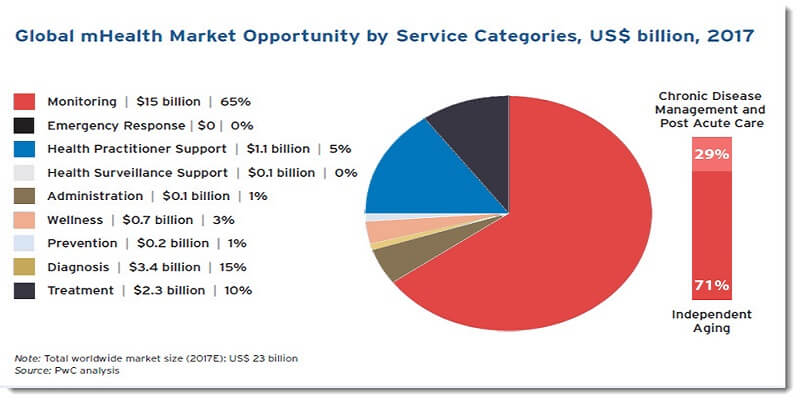 As depicted in the graph above, it is evident that the mHealth app market is here to stay. Now in its 3.0 phase, it is now imperative for apps to act as an enabler between patients and their doctors and vice versa: a move that has already begun.

Keeping the blend of human and technology alive in the industry, there are a number of mHealth apps that are doing a perfect job. Some of those are-

Available for both Android and iPhone, the app helps you check your symptom, get treatment, drug information, and find out the local hospital listings in real time. Along with that, they even offer first aid details in offline mode for quick access. So, whether you have a broken bone or insect sting, the app gives you a series of helpful tips.

It prepares you to be prepared when you talk to your doctor about your condition.

The app is one of the best medical record management apps in the market currently. Through it, you cannot just track your health information related to blood pressure, weight, physical exercise count but also remote care, meaning you can track the movements of your loved ones when they are somewhere far from you.

The app connects you with doctors near your location. With its help, you no more have to wait to cross the levels from you contacting hospitals asking for the availability of doctors. From booking appointments to well in advance to finding a doctor in urgency, the app have you covered.

Now, when talking of mHealth apps, it is imperative that we do a quick comparison of the two biggest App Platforms of the world that hosts the series of apps that are Healthcare industry’s enablers.

The answer to this comparison lies in the purpose of the mHealth app. If yours is an app that is based on giving free information or working around databases, you can go with Android’s interface to take advantage of its crowd.

If your purpose is to have an app that is based on security measures, you should choose iOS as Apple focuses a lot on device security, making its encryption impossible to disable – something that is a prerequisite according the HIPAA Compliance act, which entails that all network, physical, and process security measures should be in place when dealing with Protected Health Information (PHI). Also, company’s stringent control on its App market has made malware attack a rare phenomenon.

Other than these factors, both Apple and Android come with their set of opportunities and scope of growth for the app developers. So, depending on what way you look at it, the industry sees both iOS and Android as equals in terms of usage, with each offering something better than the other.

Whether through Android or iOS, mHealth apps are on the track of changing the industry by making it more accessible. With every passing time, one can expect to witness faster response time, saved administration costs, and greater time to research on ground changing medical research.

Are you prepared for this change?