Cardano Price Prediction- Will This Crypto Asset Be As Big As Ethereum?

Leading cryptocurrencies have witnessed some volatility in price during 2021, but many of the most popular crypto coins have recently had strong positive momentum. Currently, Cardano is the hot topic with its ADA token emerging as one of the best-performing crypto assets, thanks to a rally in the larger market, as well as impending listings on additional exchanges and major feature rollouts.

After Charles Hoskinson launched Cardano in 2017, it only took four years for it to become the world’s tenth-largest cryptocurrency by market capitalization.

By the time of writing this article, the price of Cardano is $2.2, which is susceptible to change with time. It might not compete with the lofty heights of Bitcoin, which is currently brushing $53,929 (and is expected to change in the coming years),— but this price still represents a staggering growth rate. In fact, sometime back, this growth helped ADA secure new-found status with Cardano crypto being the 3rd largest crypto. Soon, the Cardano platform fell short of its triple-digit goal at an all time high of $98.91 billion.

Cardano having overtaken competitors such as Litecoin and Ripple XRP is currently one of the emerging platforms in the world of crypto. But how much will Cardano be worth in 2022 and beyond? Is Cardano a good investment? And finally, can Cardano be part of your portfolio? Before diving deep into ADA Cardano price prediction let’s read a brief intro on Cardano and ADA.

Cardano is a decentralized blockchain platform led by Ethereum co-founder Charles Hoskinson. The development of the platform began in 2015 and it was released in 2017. Its stated goal is to become a more environmentally friendly and scalable blockchain network, in part by reducing the need of energy-intensive bitcoin miners.

Cardano is to ADA what Ethereum is to Ether and Ripple is to XRP. Hence, in layman’s terms, Cardano is the name of the platform that operates the native cryptocurrency ADA. Cardano is an open-source blockchain platform which is segregated into two parts- the one is Cardano Settlement Layer (CSL) and the second is Cardano Computational Layer (CCL).

The CSL period, also known as the Byron age, allows users to send the native Cardano (ADA) coin to other blockchain participants. Like other Layer-1 cryptocurrencies like Bitcoin, it also allows for the immutable recording of transactions.

The CCL is a separate layer that supports tokenization, smart contracts, and decentralized apps by combining numerous components published throughout the Shelley and Goguen eras (dApps).

The Cardano network provides developers with a blockchain software development platform on which they may develop smart contracts and decentralized applications. Cardano recently upgraded to the Goguen mainnet, a blockchain platform that includes token lock network features.

ADA is a cryptocurrency or digital token that runs on Cardano blockchain.

ADA does, however, serve as a means of paying for premium services on the network. Users on the network may also transfer and trade their funds through a variety of crypto exchanges, including Binance, Digifinex, and Upbit, to name a few. Daedalus, Cardano’s own crypto wallet, is a safe place to save these coins. 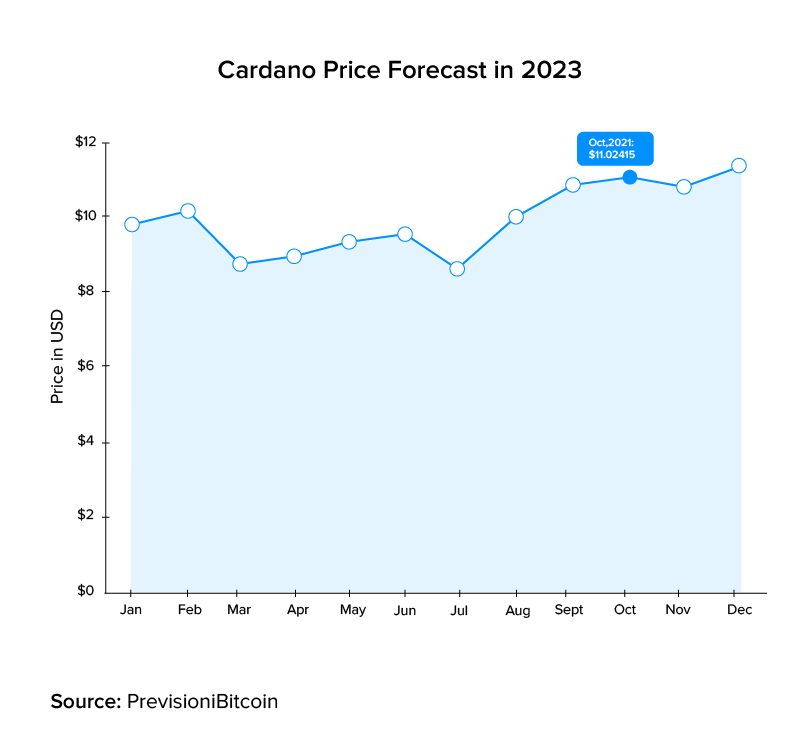 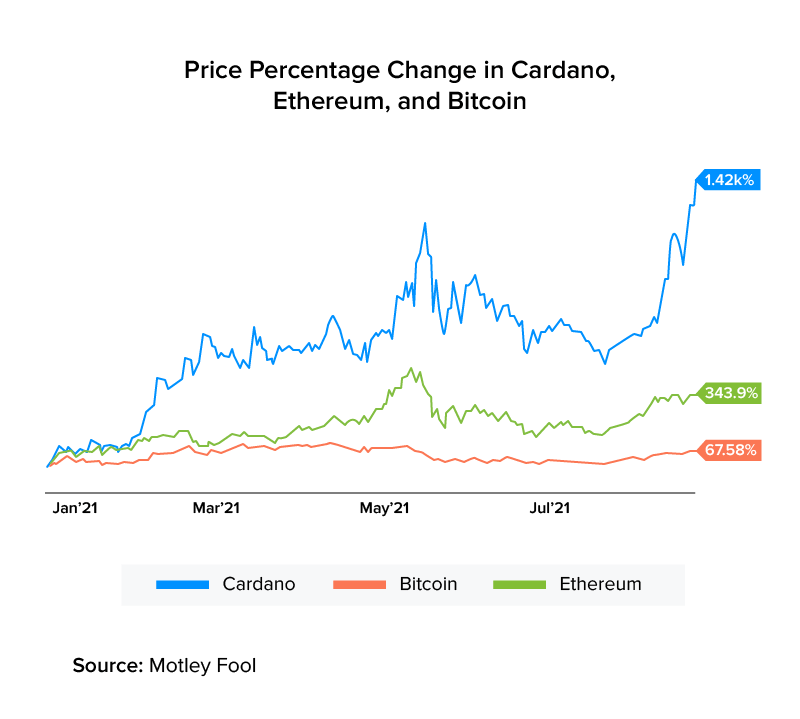 What do you think is the reason behind the increase in cardano coin price? Let’s read below to know and understand the reason.

Why Is The Cardano Crypto Price Rising?

As individual investors are piling back into cryptocurrencies, altcoins (alternatives to bitcoin) have been soaring recently. Cardano’s ADA token has recently become a popular choice among miners. 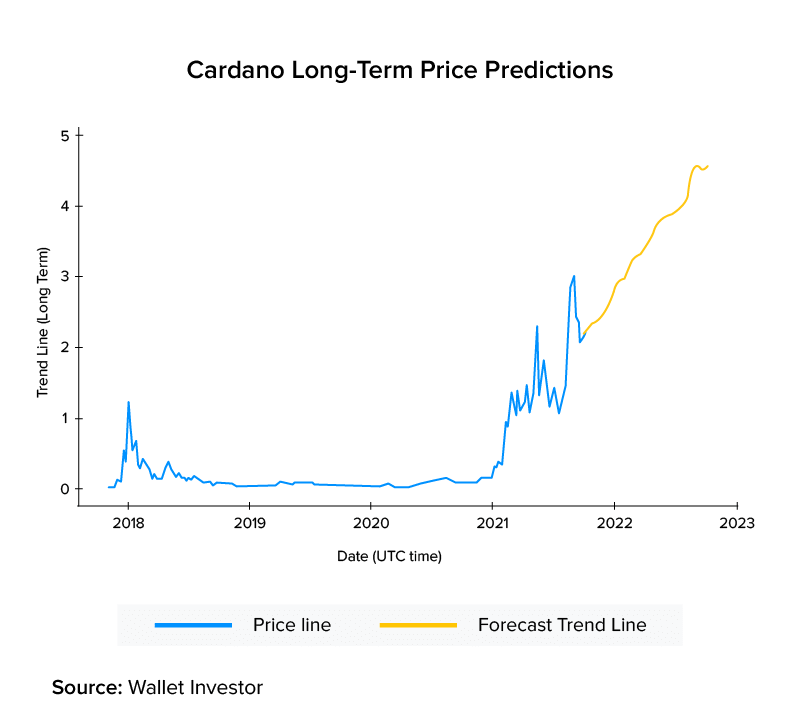 In terms of market capitalization, ADA has a market value of almost $73.27 billion and a 24-hour trading volume of over $2.4 Billion as of October 2021. As a result, the Cardano cryptocurrency is one of CoinMarketCap’s top five cryptocurrencies.

The excitement about what is expected to be a September upgrade to Cardano that will include smart contracts, which many feel will enable Cardano to better compete with the Ethereum network, is driving part of its recent growth. Smart contracts are digital agreements written in code that, once certain criteria are met, can be performed without the need for an intermediary. Non-fungible tokens, often known as NFTs, and decentralized finance applications are made possible via smart contracts.

Second, the cryptocurrency network is due to receive a software update that will allow it to compete with larger rivals like Ethereum. Smart contracts will be added to the network as part of the update, allowing Cardano to reach out to more potential investors. In September 2021, the software upgrade could be released. Cardano’s price did not vary much during the latest crypto crisis, demonstrating its resiliency.

After getting to know the why, it’s time to see the difference between cardano vs ethereum.

The Cardano vs Ethereum debate is widespread in the cryptocurrency space as both networks offer similar characteristics, and investors believe that their favored coin is the best to buy. Let’s understand the difference between Cardano vs Ethereum.

With Cardano hitting a new all-time high, we have to wonder how well the cryptocurrency has performed. To be honest, it’s mind-boggling. ADA has increased by approximately 1,400% to date. In terms of its growth, as a result, it is a top performer in the crypto world and one of the most important cryptocurrencies to examine.

According to Nasdaq, over the month of September 2021, the cryptocurrency market saw considerable bullish momentum, with Cardano rising 126%, Bitcoin up 52%, and Ethereum’s price per Ether token up 62%. Since these numbers will change as per the market trends, thus if you want to choose any platform then the time is now.

Predicting Cardano or other price prediction and the broader cryptocurrency market pricing movement requires a lot of guesswork, but there are some key catalysts for ADA on the horizon. The impending upgrade fork, which will pave the way for smart contract capabilities and other decentralized-finance features, is particularly noteworthy.