You wouldn’t have believed if anyone told you that you would be able to drive your scooter as a vehicle just like you did as a kid, would you?

Well, you certainly can now.

eScooters have presented themselves as a lost gem we totally forgot about. Of course, there were some improvisations made to the original model to facilitate transportation along with user experience.

eScooters are an overhauled version of old-school scooters turned into electric vehicles developed by modern-day eScooter  manufacturers. These are a much better option as they work on electricity and can go miles without harming the environment.

They are a mixture of the best elements of traveling by car, bike, and foot. They work on engines, like cars, enabling short travelling distances without hassle.

It was almost immediately after the advent that end-users realized eScooters as one of the most cost-effective go-to travel options for short distances. Users who are always on the lookout for cheaper travel options really appreciated the initiative, for no one really likes to pay hefty amounts for miniscule rides. Moreover, from a business front, eScooters are low maintenance, making them a perfect investment unlike cars and bikes.

Now, enough with the blabbering―let’s get down to some E-Scooter Industry trends and stats advocating the exponential growth and popularity of this industry.

The eScooter market will worth nearly $41.98 billion by 2030, as per the study by Grand View Research Inc. Due to this rise, the market will face a boom in CAGR by 8.5%.

2. During the 2030 forecast period, Asia Pacific expected to lead the market

In the same report by Grand View Research, Asia Pacific is anticipated to lead the electric scooter market around the globe by 2030. Factors backing this prediction include collaboration of charging equipment manufacturers with researchers and automakers.

By the end of 2029, the Asia Pacific is going to be the largest market worth USD 26.25 billion by 2030, due to the heavy investments made in the Vehicle charging infrastructure. 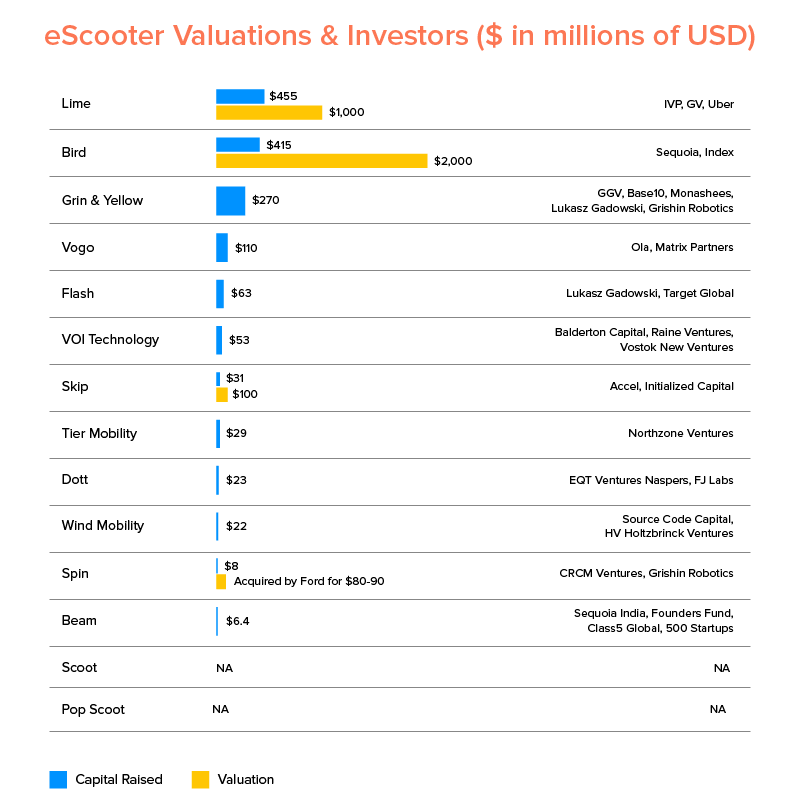 5. 5 million units of electric scooters were sold in 2018

The overall digits for eScooter units sold in the year 2018 was estimated to be 5 million. It is because many countries are enthusiastically picking up on the E-scooter trend, for it is an unparalleled substitute for natural-resources-based vehicles.

As per a report, the global sales of electric scooters and bicycles are expected to reach 129 million units by 2028. In 2019, the electric scooters sales was near 46.89 44.39, which grew to 50 in 2020. This gradual growth tells us the incessantly growing demand for the eScooter services.

Because of the ease of transport of eScooters, they are highly appreciated by the end-users triggering the electric scooter and motorcycle market to reach $13,864.0 million by the year 2025. 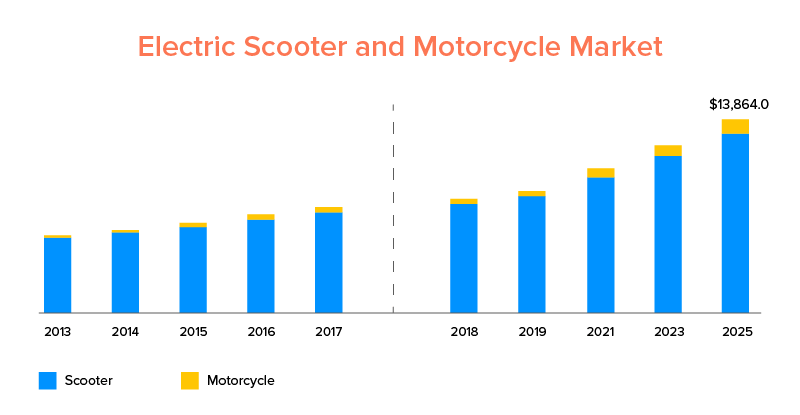 With the increase in e scooter units sold and new entries of top e-scooter startup companies like Bird, Lime, JUMP, etc. and established businesses like Uber into the field, the market is bound to show incredible growth, precisely by a CAGR of 7.3%.

9. 129 million units of eScooters and motorcycles will run on the roads by 2028

E-Scooter statistics state that by the year 2028, there will be approximately 129 million eScooter and motorcycle units running on the roads globally. We can conjecture at least one thing from this statistic that the transportation domain is following the path of environment-friendly services.

10. E-Scooter market will account for 8% of overall two-vehicles on the road

The E-Scooters and motorcycles market is currently calculated to account for 2.5% of total two wheelers on the road. By the year 2023, this percentage will touch the milestone of 8%. 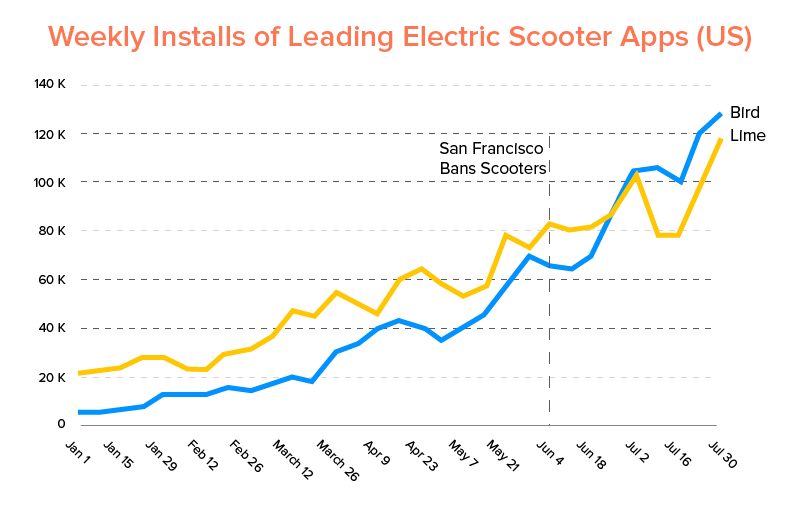 Electric scooter app development companies are coming forth after witnessing the magnitude of response by end-users. Look at the statistics displaying the increasing love of people for on demand escooter apps.

The monthly downloads count of the Bird and Lime apps increased by 580% between the months of January and July 2018, highlighting the benefits of on demand escooter apps that users enjoy. The downloads reached more than 880,000 in the United States —seven times higher than the first 31 days of 2018, as per the reports by Sensor tower. 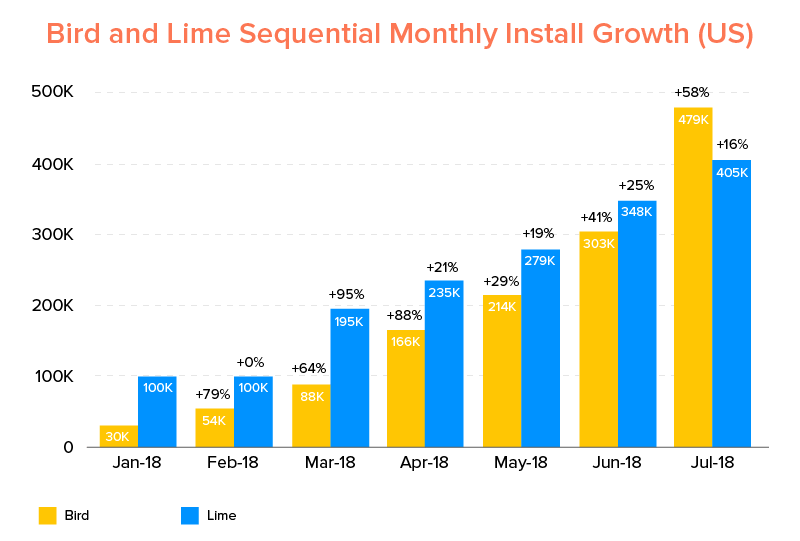 Electric Scooters statistics state that eScooter companies like Bird, Lime, JUMP, and more charge an average of $3.65 per ride. By segregating the amount we get― $2.65 for an 18 mins ride which is a standard price as the charge is $0.15 per minute, including $1 as fixed fee.

14. 84 million trips were made on shared Mobile Mobility 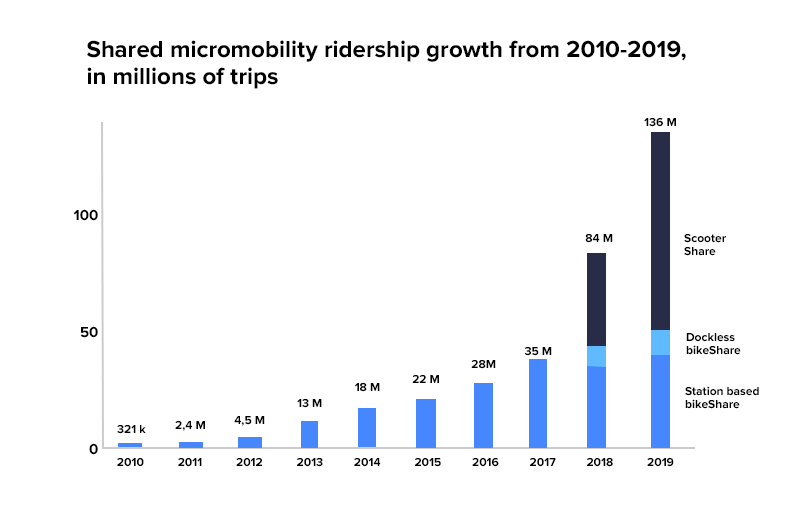 In 2020, China spent a hefty amount of 2.4 billion in the charging facility infrastructure in the country, distributing hopes of immense growth for E-Scooter companies. This E-scooter industry trend can be seen as an invitation to micro-mobility companies to expand their services to China.

According to research on the e-Scooter revenue model by Morningstar, the overall revenue for the E-Scooter rental industry is going to rise by 21% amounting to nearly $5 billion, including countries like the U.S., Canada, Latin America, and Europe.

17. Worth of E-Scooter Market in different countries is on a rise

In a survey held by Populus, it was revealed that 70% of the respondents on average hold a positive view of E-Scooters. By dissecting consumer perception by Cities, Genders, Income and Age, we will gain a clearer perspective of where the demographics of E-Scooter exist.

18. Response of users on E-Scooter by Cities 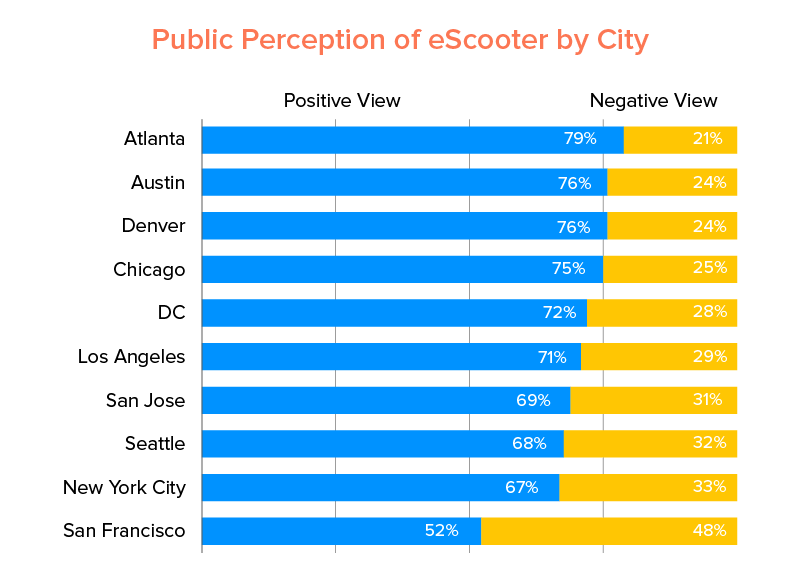 19. Reception of E-Scooter by Users’ Income 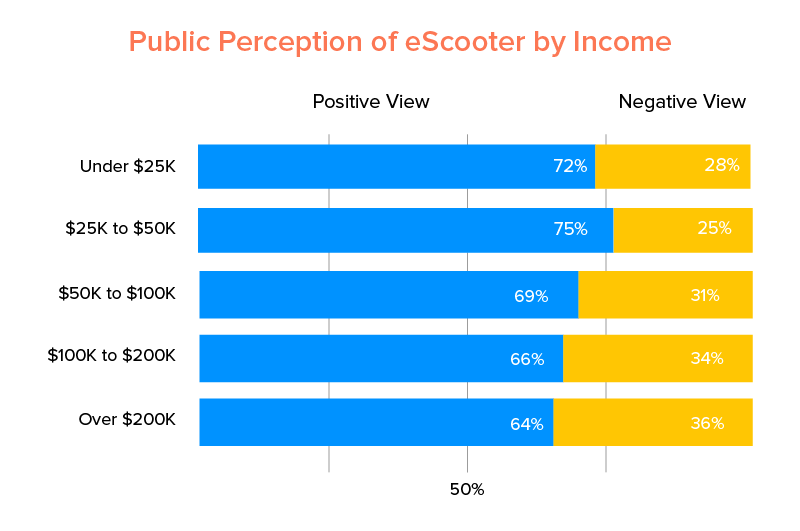 The analysis of E-Scooter and dockless bikes share data in the U.S. depicts that 75% of trips on micro-mobility are made by men, and the rest 25% are by women. Moreover, the perception of the public on eScooter by Gender is mentioned below, showing how much they like and appreciate it.

The pioneer of electric scooter market trends, Bird was valued at $2 billion in its initial four months. As of October 2018, the estimated revenue earned by Bird company was approximately $250 million. The run rate of revenue growth of Bird was at $65 million as of May 2018. Bird has raised $415 million in funding so far. Moreover, the company has become the first electric scooter-sharing unicorn. As per latest news, Bird is planning to open up its biggest European office in Paris and wants to hire 1000 people by mid-2021.

E-scooter industry trend-setter, Lime was the first to walk on the footprints of Bird and crossed the valuation mark of $1.1 billion in only 18 months of its initial launch. This fact clearly shows the immediate adoption of this model by the end-users. By the end of 2018, Lime managed to accumulate $500 million as revenue, according to Axios. Since it debuted e-Scooters, Lime has managed to raise 86% of its capital through electric scooters sales.

Skip, one of the avid followers of E-scooter industry trend was valued at approximately $1 million. It is reported that Skip generates $125k as revenue per employee.

Jump, which is a baby brand of Uber, was acquired for $200 million for strengthening the micro-mobility marke and is said to have raised total funding of $11.6 million. Its estimated annual revenue is amounted to $5 million, which is anticipated to grow with the expanding electric scooter industry.

What is The Future of Electric Scooters?

Looking at the E-Scooter statistics, we can conjecture that this on-demand eScooter model is nowhere near done and the future of Electric Scooters is bright as the sun. We can certainly expect some improvisations made in these scooters due to their unprecedented demand across the globe. Here is what we can expect to be added to the eScooters to make them more functional, safe, and utilitarian. 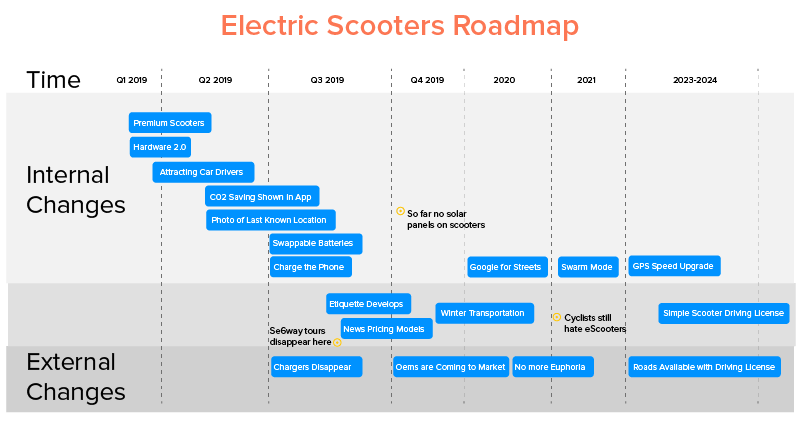 Unlike other markets, the eScooter market comes loaded with demand. Once you launch your app on the platform and into the world, you will be amazed to see how fast its reception can be since, the transportation is a basic need. A huge number of users use ride-sharing and ride-hailing services, so your app will be an ideal choice for them to have to travel short-distances. Have a look at the app stats for Bird and Lime to convince yourself of the benefits of E-Scooter App Development.

Though the E-Scooter market has seen an unprecedented rise in its demand and growth, there are still limited players on the playing field, making it an absolute steal of an opportunity for entrepreneurs wanting to scoop all that this emerging and continuously growing industry has to offer.

Sea of Investors at the doorstep

The investors are eagerly waiting for a chance to grab the opportunity by its fetlock for investing in the emerging E-Scooter market. So, it is easy for you as an entrepreneur to acquire capital for your innovative business model and app.

With only a small fraction of competitors in existence, it is facile for entrepreneurs to invent, experiment, and innovate with your app idea by instilling out-of-the-box features into your app. For example, instead of merely providing pick and drop facility of eScooter via your app, Beacons can be integrated to let users know of discounts in specific areas.

As opposed to product-based business, E-Scooter Market is a steal deal for the returns on the investments are instantaneous. There is no waiting around for your electric scooters sales, as transportation services are always on demand on a daily basis; meaning entrepreneurs can make profits and cover their investment costs with rides in just a few months. This way, the cost of eScooter app development turns out to be much lower than the returns they are able to get.

Surmising that the E-Scooter Industry is on an unprecedented rise globally will not be a false statement, lest it would have failed already two years back. This industry is certainly taking E-Scooter app development on the height of success along with it. If you wish to hop in this hot-market, then refer to this  E-Scooter app business in-depth guide.

E-scooters have been in use for long enough to create different kinds of impressions in users’ minds.  Its progress is owed to its specific qualities and offerings it provides to its users and environment alike. The tremendous growth E-scooter rental and sharing industry has seen in the few years of its emergence is definitely commendable. …

How to Start eScooter App Business {An In-depth Guide}

Massive funding rounds, partnerships, and well-devised unit economics characterize the market of electric scooters. Between high revenue and entry of Uber and Lyft in the space, it is evident that the market growth rate of the domain is for the long haul. An event that you will find getting highlighted in the eScooter app development…

With the eScooter market size poised to grow to around $41.98 Billion by 2030, the time is ripe for businesses to get their names added in the list populated by the likes of Lime and Bird and other such electric scooter sharing companies. In this article, we are going to look at the top electric…