Make COVID-19 the Springboard for Your next Mobile App Idea

The world was sucker-punched as it continues to reel from the ongoing economic paralysis of COVID-19. But fighting to keep businesses alive is not a lost cause. The impact of the pandemic on businesses has sure been merciless, but as we turn the page to a socially distant and digital reality obvious business models are presenting themselves.

Mobile app development services have the proverbial doses to inject new life in dying ventures. It is an opportune time, more so for a few app categories than others, to reassess their strategy or better, reintroduce themselves to the masses in a new nutshell. 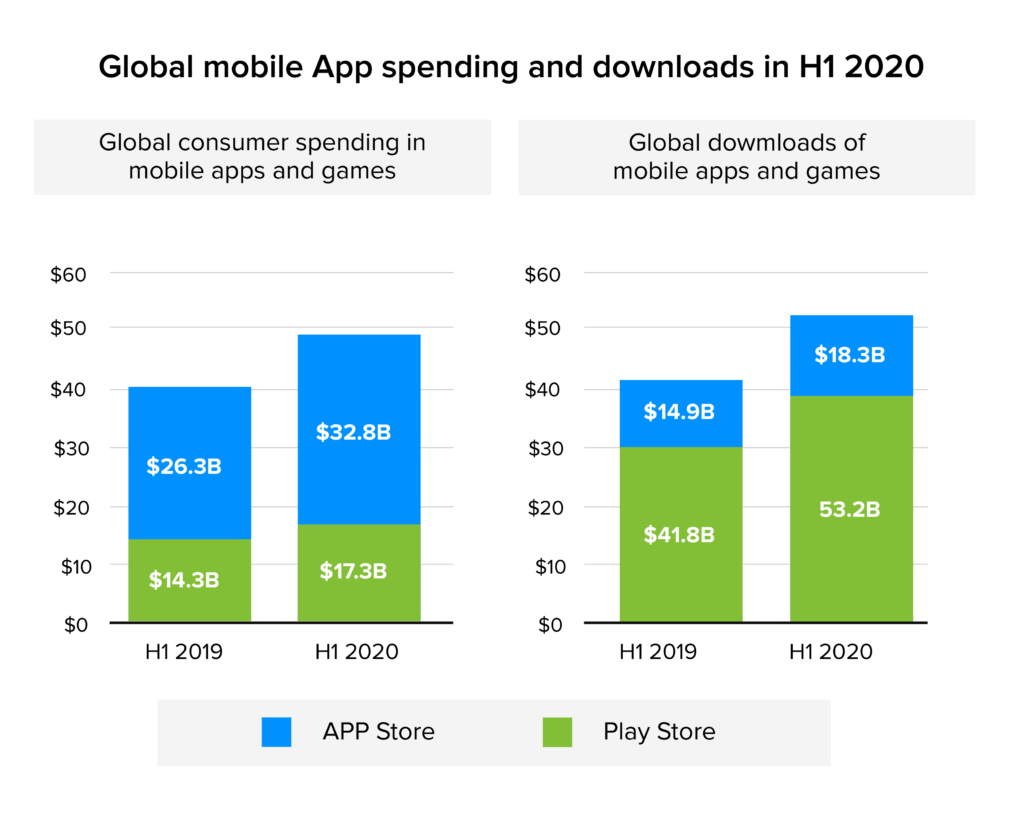 But what were the people downloading and spending on exactly?

For starters, Tinder is the highest-grossing app on both the play stores raking in $433 million followed by YouTube. For the States, we get a good idea of people’s tastes during the initial part of the pandemic in the following graph. You cannot forego education, essential commodities, and work. Apparently, these were the most downloaded categories by Americans from March 2 – March 16. Such was the effect of COVID-19 on mobile apps, making now the best time to start a mobile app startup. 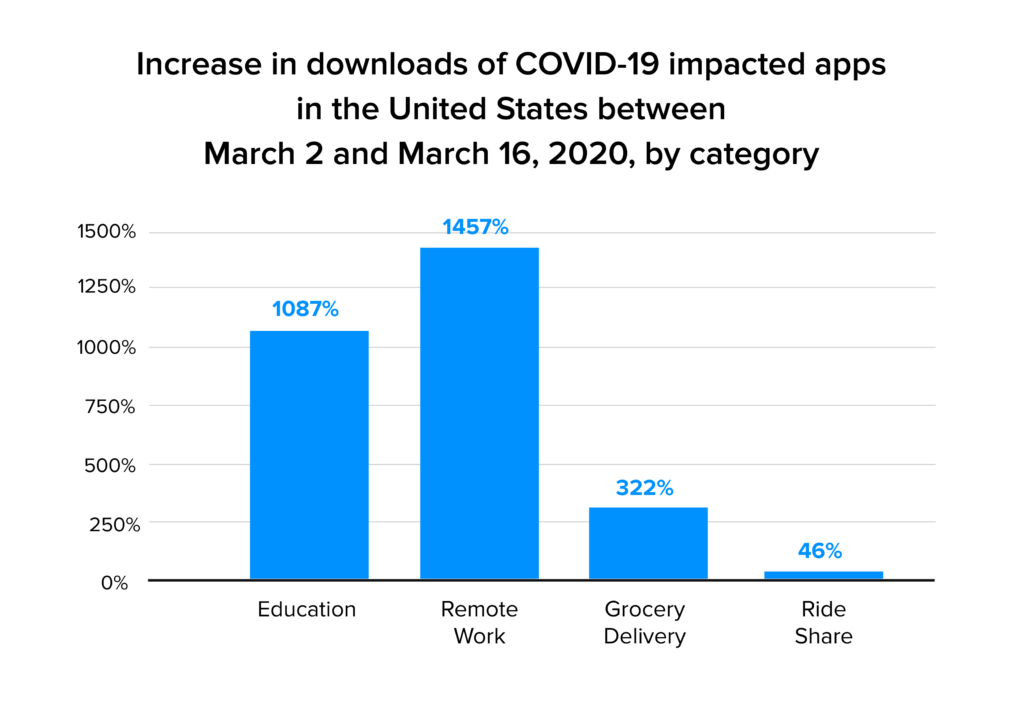 Impact of the Pandemic on Mobile Apps

The scale of economic uncertainty that the virus has unleashed on the planet is parallel to none in human history. It exposed the shortcomings of interdependent countries that shook to the core due to their reliance on a centralized supply chain hub, China. As trading routes were disrupted, few app categories absorbed and began relishing the rising consumer interest. They make the highlight reel of the impact of COVID-19 on mobile apps.

Due to the mandatory stay/work from home (whichever is applicable) stance of the federal agencies, people shifted their preferences to order essential items online rather than step out. Given that the E-commerce locale constitutes multiple categories, the ones that made the priority list of people were food, hygiene products, clothing, and medications. This is evident from a survey in which 52% of Americans admitted to shopping more online due to COVID-19 restrictions.

Another survey revealed the itinerary checklist of items that more and more people have opted to order online. 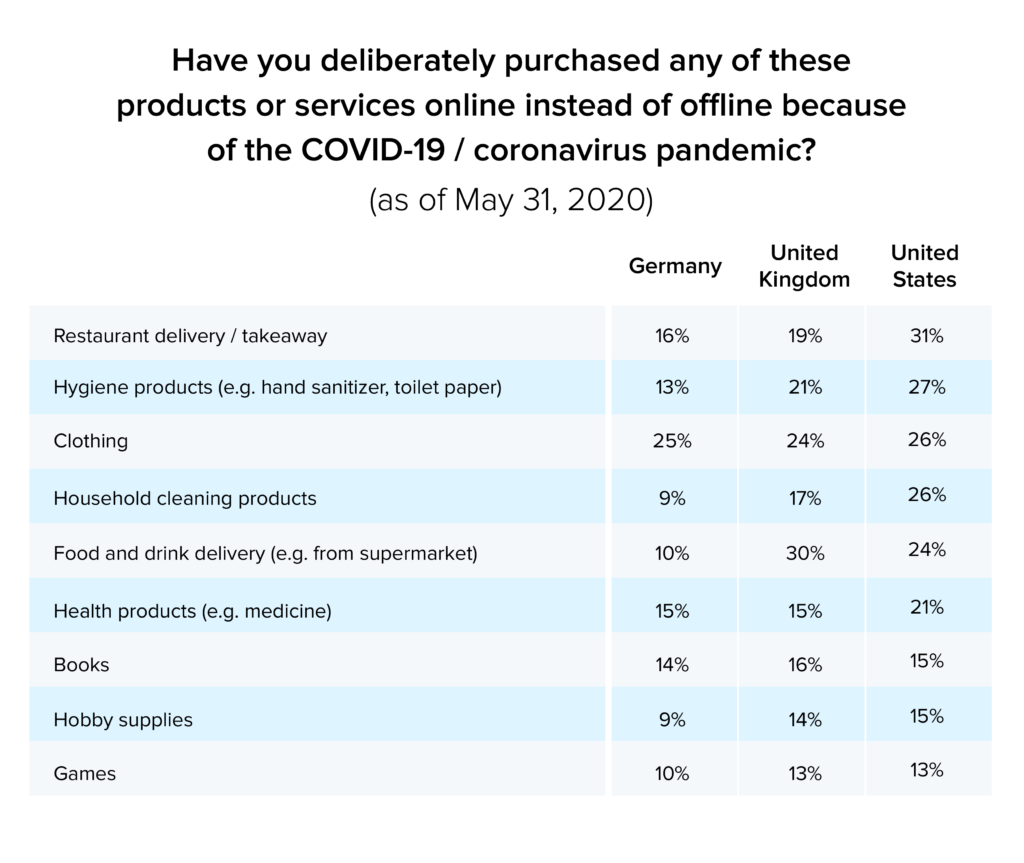 The impact of the pandemic on mobile app development has been such that we experienced a surge in requests to develop MVPs for eCommerce vendors. Some aim to diversify by launching newer subsidiaries, others taking their first steps in the field. It was recorded that global eCommerce sales at the height of the lockdowns hit 66% and that has now flattened at 7% above last year’s sales levels for the same time. In keeping with such forecasts, we think the demand for such apps will continue to rise.

Forced to put up at home, people are conscious of the role a healthy body plays in hosting a complimenting mind. There were about 656 million health & fitness app downloads in August 2020 making the total downloads for Q2 47% higher than the same time last year. Strava was the highest gainer with 179.2 million downloads within the first 5 months of 2020. The bottom line is that even couch potatoes are acknowledging the benefits of boosting immunity be it through a robust exterior or vis-a-vis a diet planning and monitoring app.

As a result of the impact of coronavirus on mobile apps development, the health & fitness apps marketplace is expected to grow at a CAGR of 21.30% from 2020 – 2027. 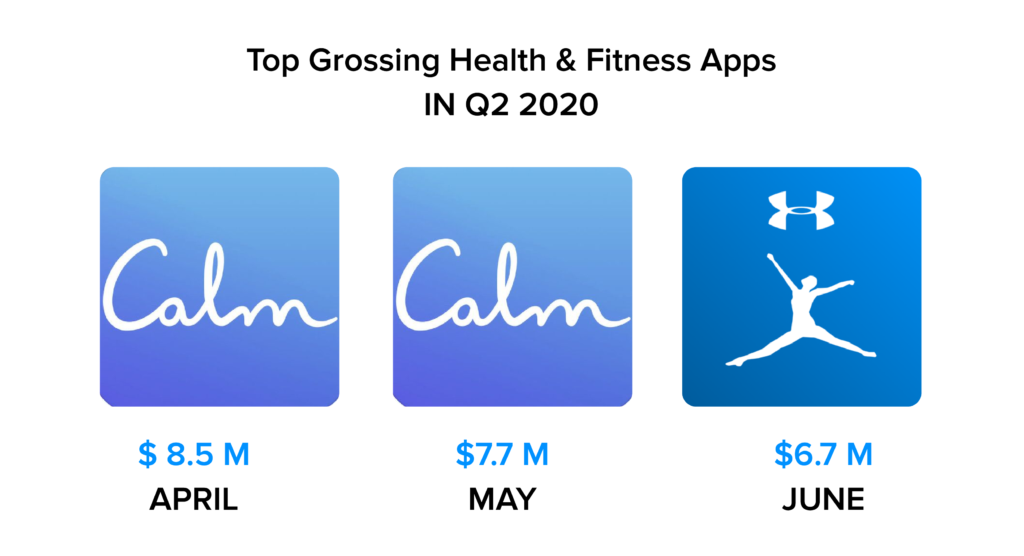 Our 600+ team (also working from home) has immense insight into developing healthcare apps such as Soniphi, YouCOMM, and Health-e-People. No matter the impact of COVID-19 on mobile apps development, we know exactly what on-demand e-commerce solutions need especially in times like these.

One of the immediate COVID-19 effects on mobile, or rather the impact of it shall we, is that people want to stay connected. And that can happen either through video (more on it later) or messages. Yes, we already have messenger apps like Facebook and WhatsApp, but their rate of adoption differs from one country to another. But one thing is certain until things normalize everyone will make note of maintaining online connectivity through chats. 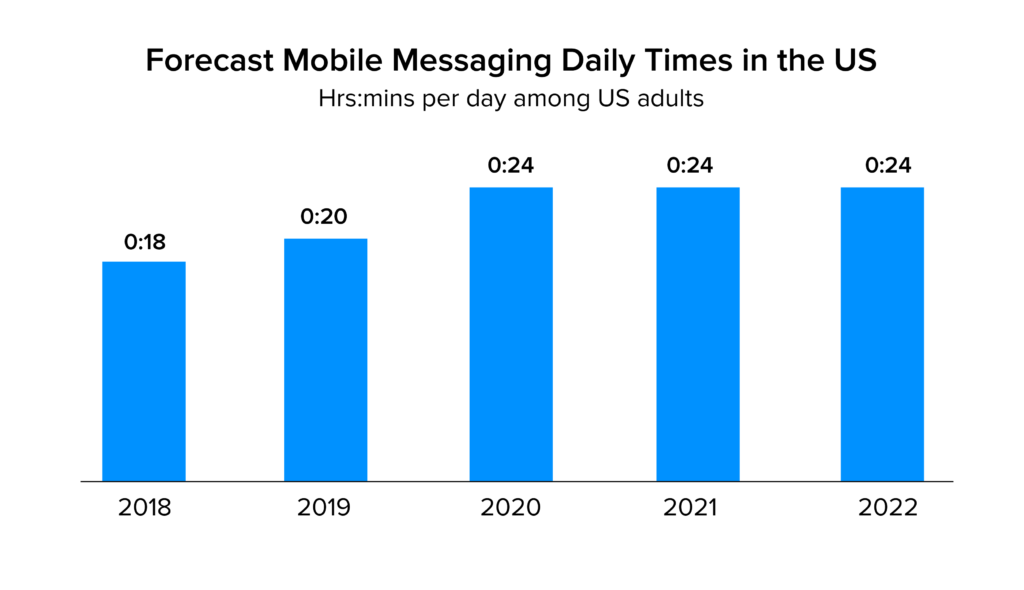 Factoring in COVID-19, US adults will spend about 24 minutes each day on mobile messaging from 2020 – 2022. Also, considering the next big idea is just around the corner, perhaps it’s still not too late to consider entering the online chat marketplace.

Following a flattening of the curve at many locations and the subsequent lifting of restrictions there has been an upsurge in second waves. Community transmission hasn’t been culled and the majority of people have resorted to the hope of a vaccine, an approved lot of which is expected by the end of 2020, latest. But issues in distribution will remain therefore mandating social distancing to sustain. 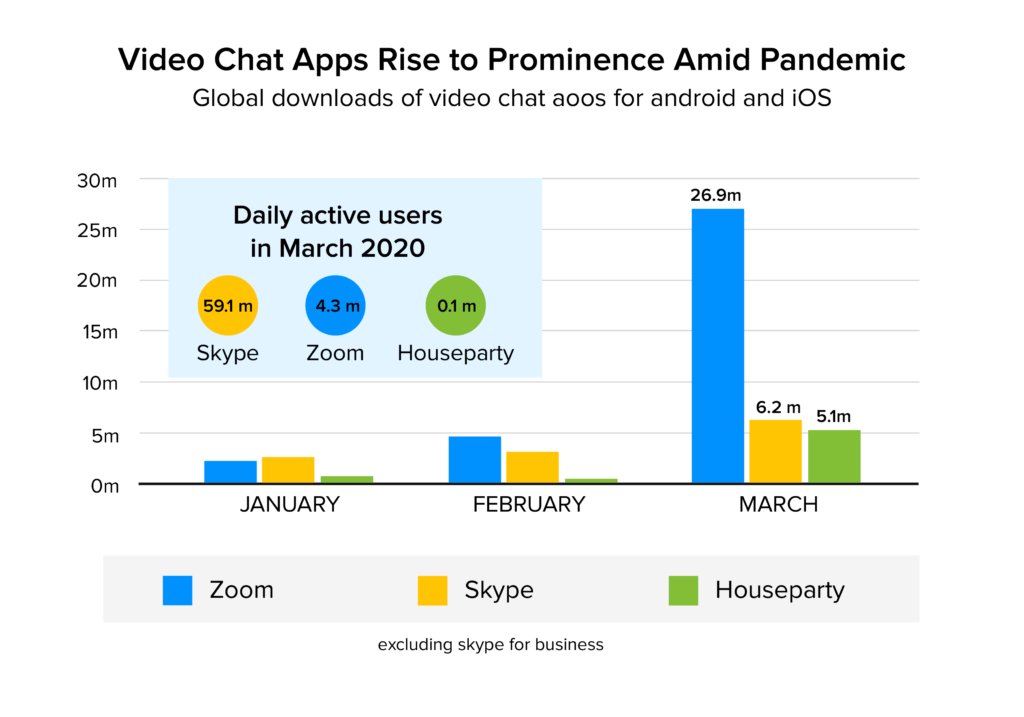 Offices could remain shut for a long time, a possibility that has been jumped on to by video calling apps. This impact of the pandemic on technology has been such that online meet-ups are the new normal. Whereas Zoom and Skype have been the go-to apps for businesses there are others like Houseparty and Hangouts Meet, that are designed for lighter occasions.

Globally, as much as 1.3 billion students were impacted by national school closures due to the virus. Considering the staggering growth rate, it’s not a secret as to why EdTech is a profitable domain. 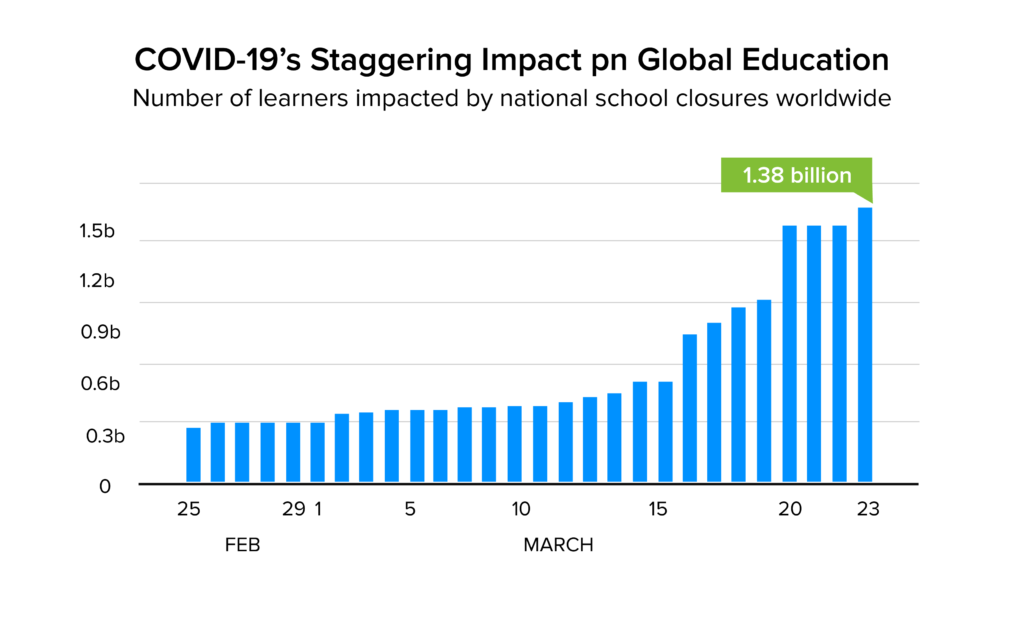 Google Classroom topped the charts for the most downloaded app for July with 14.8 million downloads. This growth was 13.5 times higher than the same time last year. It was followed by YouTube Kids, Duolingo, Tips for File Transfer 2020, and Cake.

There are multiple ways you can differentiate your app based on the target audience. To give you an overview you, with the help of a mobile app development company like Appinventiv, you can design the following types of Edtech Apps based:

The market for online food delivery apps reached a valuation of $107.44 billion in 2019. The impact of the pandemic on the global mobile apps market, especially its food delivery sector, has been mostly affirmative. As more people opted to order essential groceries online due to COVID-19, the market value for such apps in 2020 is projected to touch $111.32 billion. This spells a CAGR of 3.61% in one year.

But experts believe this is the lower-end of the ceiling that was adversely affected due to global economic frailties. As public spending power enters its regenerative state the CAGR would grow by 11.51% through 2023, bringing the cumulative valuation of such apps at $154.34 billion, meaning it is time for on-demand brands to start preparing for the post-COVID world.

As a top mobile app development company, we’ve had the privilege of partnering with brands like Domino’s and working closely to help them grow business. Based on such exclusive experiences, we know which premium specifications and user tastes help brands stand out.

Bringing It to a Close

By now you would have understood that the impact of Coronavirus on the mobile economy will be far better off than the impact of the pandemic on businesses operating in the retail space. If you need (honest) suggestions on how to improve your app idea or you plan to undertake a makeover of an existing app, then do get in touch. Our experts would be happy to do their bit in your success, as they’ve done on previous occasions in taking handkerchief ideas to million-dollar valuations.