How to Choose the Best Software Architecture for Your Enterprise App?

Software Architecture is the founding stone of enterprise application development. Think of it as the blueprint of a real-estate that you must design foremost, in order to provision the layers of the house, how will the residents interact with it, how would you enter and exit the premises, so on and so forth.

What Does a Good Enterprise software Architecture Signify?

The question is akin to asking, what role does a healthy mind play in the development of your body? It’s interlinked, isn’t it! And so are software processes to the running of an enterprise. It is mission-critical, that IT teams agree on a malleable and adaptable enterprise software design for the following obvious reasons, beside the fact that a sound architecture is how enterprise mobile apps are able to increase ROI.:

The beauty of software development engineering is that you can integrate multiple architectural patterns within one system for optimization. But it is advisable to choose a pattern for your enterprise, with the help of development companies in your areas.

One of the most common, and efficient, models deployed by enterprises is the Layered Architecture, also called the n-tiered pattern. It packs similar components together in a horizontal manner and is self-independent. What does that mean?

It implies that the layers of the model are interconnected to each other but not interdependent. Similar components of enterprise application architecture stay at the same level allowing the layers to be separated inadvertently based on the nature of the code. It is this isolation that lends the software layers an independent nature.

Consider an instance, wherein you’d want to switch from an Oracle database to an SQL. This shift may cause you to upend the database layer but will not have a domino effect on any other layer.

Evidently, it serves a challenge for an enterprise software architect to create layers that separate from each other. Nevertheless, since the roles of each layer are clearly distinct, it accredits this software development architecture the following qualities:

The flow of code is top-down, meaning it enters the presentation layer first and trickles down to the bottom-most layer that is the database layer. Each layer has a designated task based on the nature of the components it preserves. These could be checking the consistency of values within the code or reformatting the code altogether.

Refactoring – a key way to lower frontend maintenance cost – is a software development process by which developers change the internal shape and size of the code. They do it without affecting its external attributes and can also be carried out in an n-tiered model. 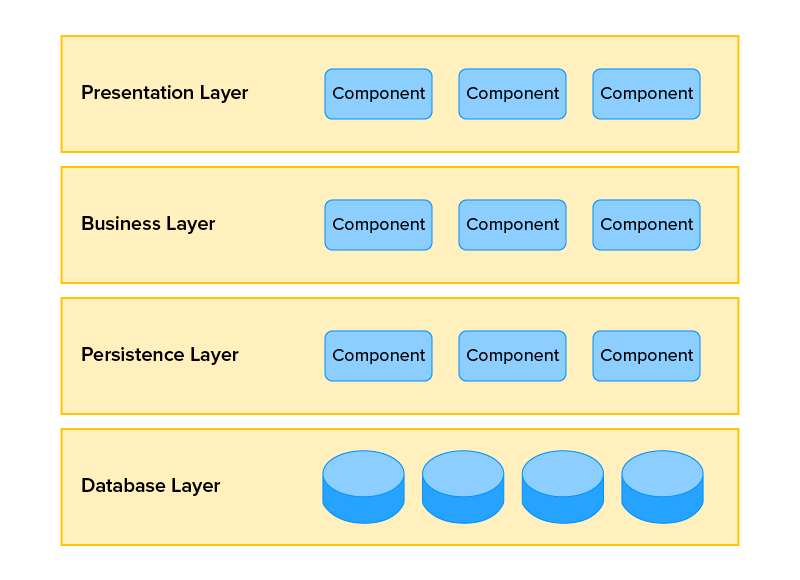 This software development architecture can be customized to add layers to the presentation, business, persistence, and database levels. Such a model is called a Hybrid Layered architecture.

The software layer architecture pattern suits the niche of LOB i.e. Line of Business Applications. These are applications that are essential to the functioning of the business itself. For instance, the accounts department of an organization needs software such as QuickBooks, Xero, Sage or Wave Accounting for keeping financial data.

Similarly, the marketing team would demand a customer relationship management software slash tool to help them cope with the volume of interactions. In short, applications that do more than just CRUD (create, read, update, and delete) operations are suited to the layered architecture pattern.

An event is described as an alteration in the hardware or the software. Event-Driven Architecture has two parts to the working equation i.e. an event producer and an event consumer. Let us understand how this application architecture works:

It all begins with the event producer, who identifies the emergence of an event, and labels the same as a message.

This last step determines the final outcome of the event that has been generated. The brightest example of this pattern can be found on a web page.

The moment you click a button, the browser interprets the event and surfaces the programmed action, such as video playback, matching the input with the right output. In contrast to the layered architecture, where the code must flow top-down and filter through all the layers, Event-Driven architectures deploy modules that are activated only when an even connected to them is generated. 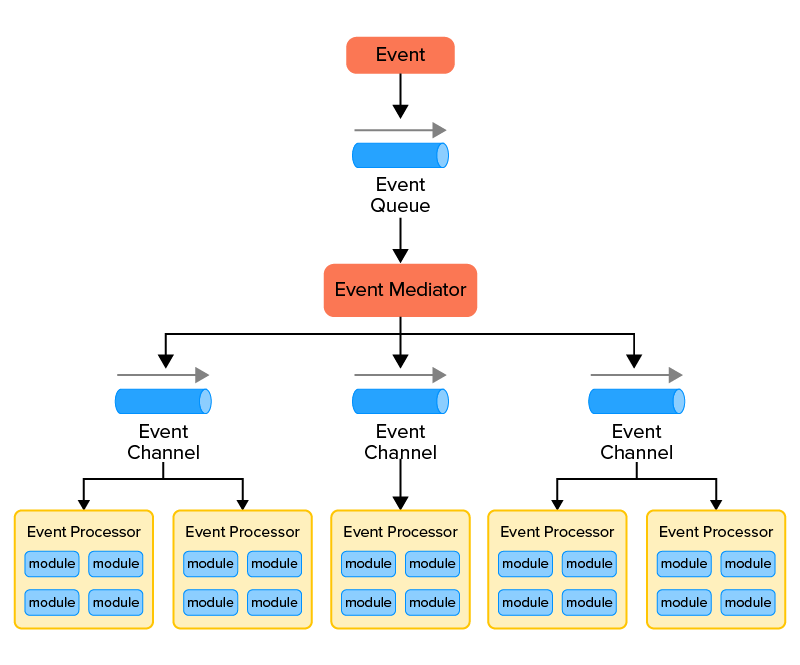 Event Driven Architecture, the most popular enterprise software architecture and design, can be deployed for applications that leverage instant data communication that scales on-demand as in the case of website tracking or stream processing.

Many third-party applications, in view of software architecture design best practices, make available software packages as downloadable plug-ins or versions. It is to this particular type that the Microkernel Architecture is most suited, as a result of which it is also called the plug-in architecture pattern.

With this style, enterprise application development services can add pluggable features to an erstwhile version of the software providing for extensibility. The architecture is formulated of two components, with one part dedicated to the core system and the other to the plug-ins. Minimalism is followed while designing the core of the architecture, that stores just the right proportion of components to render the system effective. 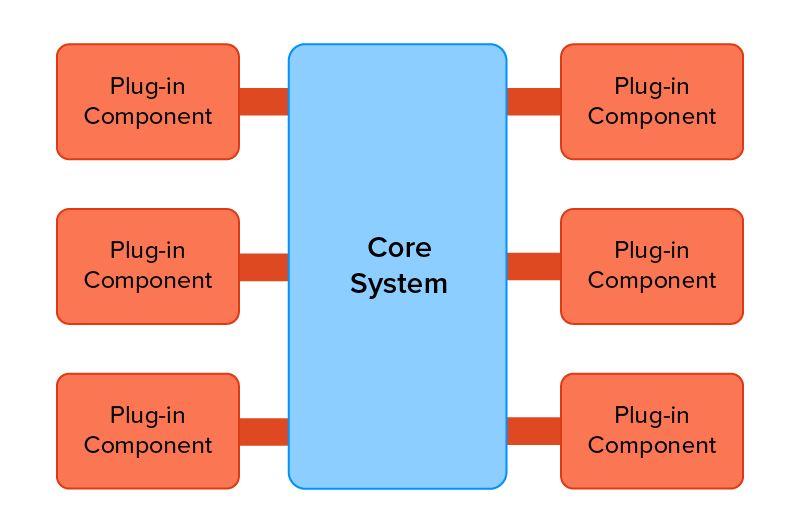 The most relatable example of the Microkernel Architecture would be any internet browser. You download a version of the application, that is essentially a software, and depending upon the missing functionalities, download and add plug-ins. Enterprise software development services rely on this pattern for designing large scale, complex applications as well. An example of such a business application could be a software for processing insurance claims.

Microkernel Architecture is best suited for workflow applications in addition to those that need job scheduling. As pointed above, like a web browser, any application that you want to release with just the right amount of specs but want to leave room that can be filled in by installing additional plug-ins can be built with this design pattern.

Microservices are defined as a self-regulating, and independent codebase that can be written and maintained even by a small team of developers. Microservices Architecture consists of such loosely coupled services with each service responsible for the execution of its associated business logic.

The services are separated from each other based on the nature of their domains and belong to a mini-microservice pool. Enterprise mobile app developers leverage the capabilities of this architecture especially for complex applications.

Microservices Architecture allows developers to release versions of software thanks to sophisticated automation of software building, testing, and deployment – something that acts as a prime differentiation point between Microservices and Monolithic architecture.

Use Microservices Architecture for apps in which a specific segment will be used heavily than the others and would need a sporadic burst of scaling. Instead of a standalone application you may also deploy this for a service that provides functionality to other applications of the system.

This type of architecture pattern is designed to overcome high load by splitting up both the processing and the storage between multiple servers. The concept of Tuple Space is the basis of the name of this architecture. This best software architecture consists of two main components – a processing unit and a virtualized middleware.

The most ideal example of this type of enterprise software architecture is a bidding auction site. The internet users place bids on the site through a browser request. Once the request is received, the site records the bid with a timestamp, updates all the information related to the latest bid, and sends the data back to the browser. 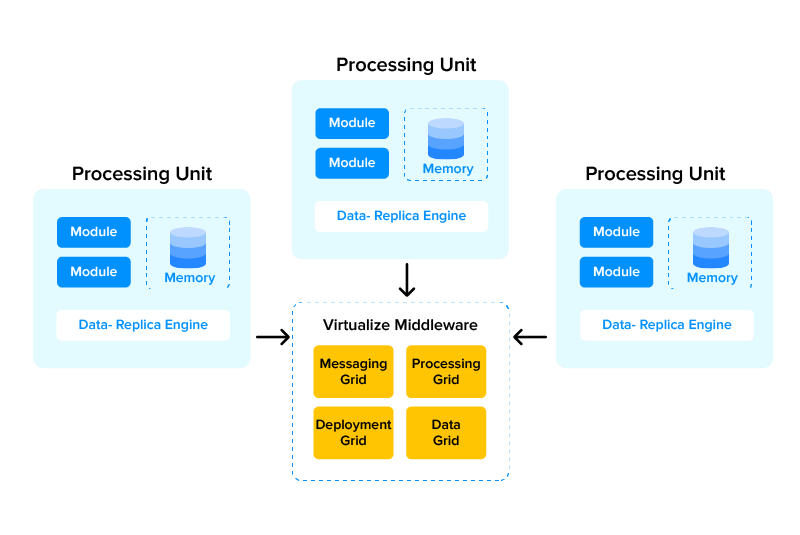 Use space-based architecture for apps and software that function demanding a constant load of requests along with a large user base. It is also used for apps that are supposed to address scalability and concurrency issues.

It is a modern enterprise software architecture with two main components – client and server. The server acts as the producer and client acts as a consumer. This architecture facilitates communication between the client and server, irrespective of whether they are under the same network or not. A client requests specific resources to be fetched from the server in the form of data, content, or files. The server responds to the client requests appropriately by sending over the requested resources.

Client-server architecture is quite flexible as a single server can support multiple clients, or a single client can use multiple servers.

The best example of this architecture is Email. When a user is looking for a particular email, the server looks into the pool of resources and sends the requested email resource back to the user/client. 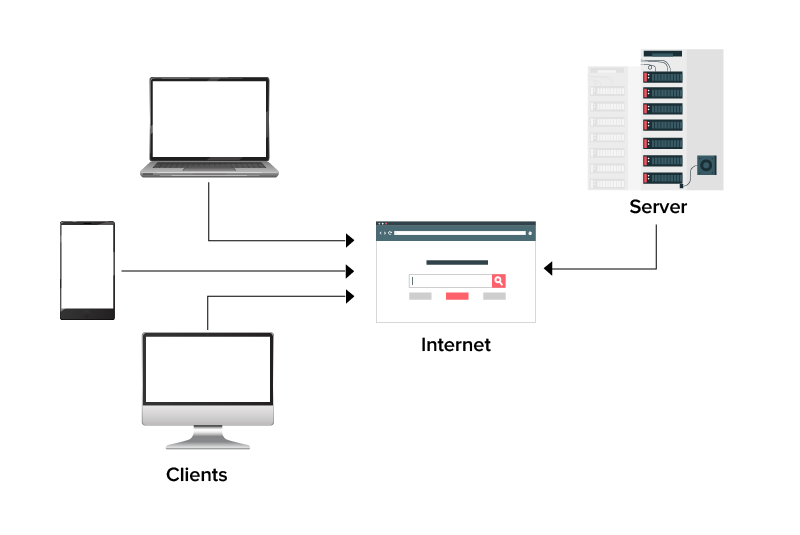 It Does Not End Here

While the enlisted architectures above definitely signify the most favored design choices for organizational software development, there are plenty of others, equally interesting and perhaps more befitting to your project. At Appinventiv, we have the pedigree to help small scale companies, medium-sized businesses and enterprises come up with state of the art tech solutions. Spare a minute or two and let us help you realize the potential your next architectural project deserves with our enterprise software development services in USA.