Let’s Rewind: How We Started Our Journey in Blockchain Domain

“The only impossible journey is the one you never begin.”

For few, the Blockchain journey begins as a calm river. For others, it emerges as an adventurous ride with adrenaline-fueled emotions tangled with trading cryptocurrency. But, for us, it was somewhat different. It began with a risk.

During those days, blockchain was considered a hype that was poised to lose its essence. But on the contrary, the Blockchain market was flourishing, anticipated to generate revenue of $229.4 M. But, a majority of entrepreneurs and developers were seeing it as a synonym to Bitcoins. Only a few reputed names like IBM were exploring the scope of Blockchain beyond cryptocurrencies and encouraging developers to create innovative solutions.

This is when the Appinventiv team decided to enter the market. We were recently featured on GoodFirms as India’s leading app development company for delivering bespoke solutions to our clientele. And, in accordance with our vision to challenge the boundaries of the mobility world, we planned to introduce Blockchain into our expertise set. We understood the scope of emerging blockchain technology and worked on gathering knowledge of enterprise blockchain. Currently, enterprise blockchain real-world use cases have increased across different industries as more businesses are adopting blockchain.

We soon built a team of experts from different domains to easily engineer users’ needs, be it from C++, Node.js, Python, Machine Learning, or UX department. We brainstormed and devised to start with unfolding the basics of Blockchain.

We looked into how this tamper-evident, shared digital ledger that records transactions in networks, works. We engaged with different existing blockchain-based platforms and solutions to get familiar with three pillars of the technology – Decentralization, Transparency, and Immutability.

Once we gained a comprehensive knowledge of what is blockchain, how it works, and related concepts like consensus algorithms, we took a step towards getting the show on the road.

After all, as a saying by Anton Chekhov states, “Knowledge is of no value unless you put it into action.”

We armoured ourselves with all the technical and business-related concepts, commenced sharing them with business prospects, and cracked our first project. The one that started a new era of innovation for us.

How We Developed Our First Blockchain Project

Since bitcoins and cryptocurrency wallets were in trend in process those days, the first project we worked with was a Bitcoin-based application – the Binkx app.

The idea proposed by the clients was of a web application that enables users to trade with bitcoins. We brainstormed on the idea, studied its user persona (which were Mexicans) – just like we do in the case of creating mobile apps, and came up with an app prototype.

[Know Here: How We Work at Appinventiv]

We focused on delivering a complete set of simple yet useful features, including adding, purchasing, sending, and withdrawing bitcoins. In addition to this, we also added the coin converter feature – the functionality of converting bitcoins to dollars and vice-versa – keeping user experience in consideration. Later, we employed various open-source platforms and third-party tools to introduce all these features and functionalities into the web application.

And this is how we launched Binkx  – the web application that took the concept of multilevel marketing to the next level. 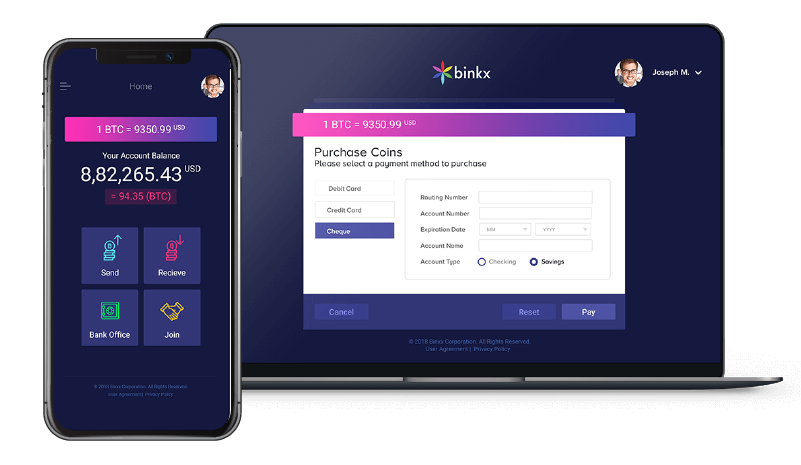 The success of the Binkx app filled our hearts with pride and enthusiasm. It made us realize that we have not only studied the growing future of cryptocurrencies but have also contributed to it.

After this, we worked on various bitcoin and payment-focused projects like Payment Porte which brought great traction and ROI to the respective businesses. At the same time, we dig deeper into the Blockchain world. We learnt about ICO, IEO, Hyperledger, difference between Custodial and Non-custodial wallets, and much more.

But, keeping our vision intact, we decided to not get swayed with the idea of limiting ourselves to a single industry. This was a significant turn in our blockchain journey.

A Turning Point in Our Blockchain Journey

We realized that there are various entrepreneurs who wish to enter the Blockchain industry, but are unclear about the different possibilities. So, to start with, we created a simplified yet useful Entrepreneur’s Blockchain guide.

Our team helped Blockchain enthusiasts uncover different areas in their traditional processes that can be revamped with the help of this technology. We gave them a sneak peek of our approach right from executing cryptographic algorithms to developing smart contracts, creating ICOs, and the process of how we choose the best blockchain development platforms.

This way, we soon grabbed multiple projects which later revolutionized the business domain and processes. A few of which were:-

Empire app is a complete hotel booking ecosystem fueled with the power of crypto-economics. 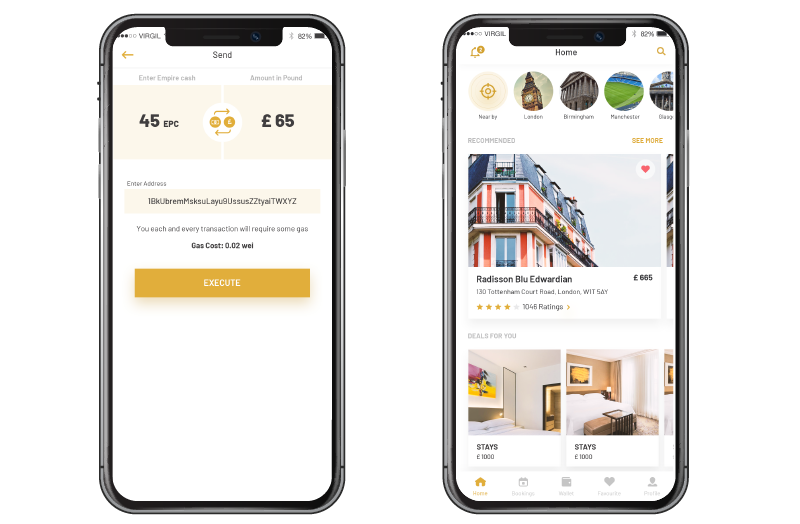 The idea behind this application was to make the hotel booking system transparent, free from third-party intermediaries who ask for more money in return of convenience, and to introduce cryptocurrencies in the ecosystem.

We developed this application using a public blockchain, making it accessible to everyone. Also, our experts introduced a currency called EMPIRE CASH which can be used just like Fiat money.

We have already delivered an MVP of this application. It is presented in the ICO and has received accolades from various top leaders. Now, we are working on building a full scope application of the same.

[Get familiar with our ‘so far’ journey in the hotel booking domain via our Case Study on Empire App.]

Veme is yet another ongoing social media project where we showed our expertise in blockchain development.

The platform, with the first phase already launched, lets users capture every big and little moment of their lives in movie format which they can share with their loved ones.

With our Wine Refinery project [name disclosed], we entered into the B2B industry and looked into the role of Blockchain in supply chain.

The clients came to us asking for a solution to mitigate the risk of counterfeiting and relabelling of cheaper wines with reputed ones in the industry. We studied their market and introduced the concept of private blockchain. 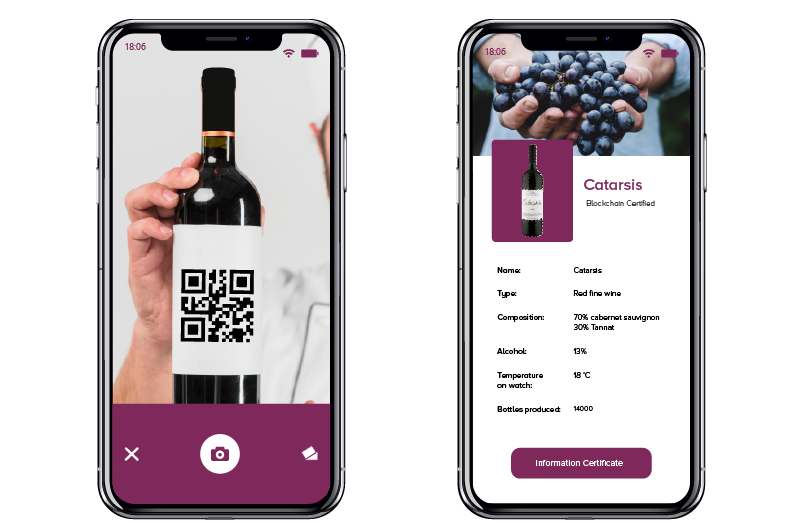 Our team converted their wine bottles into unique digital records using Hyperledger to make their supply chain transparent and immutable. We tested the POC by tracing 1200 wine bottles and detected 5 counterfeit ones during the supply chain process.

The project, though ongoing, has passed its first phase and is expected to help the brand in streamlining and decentralizing their process, along with building trust among its customers.

Dapp Solutions is another project that sparked our interest.

Here, the idea proposed was to develop a marketplace that provides users with services offered by multiple applications.

Our team studied the needs and expectations of users in the age bracket of 18 to late 30s, and developed multiple mini-apps. Later, we combined those applications into a single platform. And this way, met the client requirement.

Besides, to give a touch of decentralization in ‘Appinventiv Style’, we worked on four areas:-

Another major project we worked upon was in the education sector.

It is basically a LMS-powered solution that targets fraudulent course certification and other such trust-related issues in the education sector. The application works using smart contracts, letting students get smart contract based certificates for the courses uploaded by the teachers. Thus, adding immutability and transparency criteria of Blockchain into the domain. 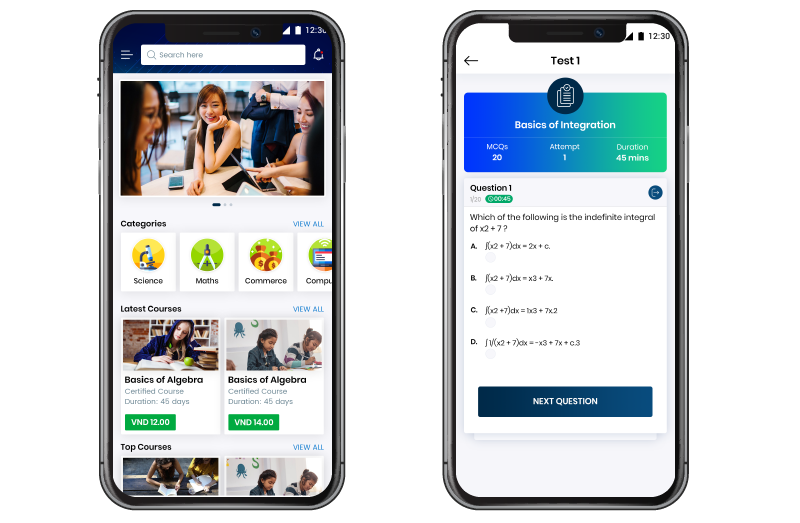 Nova app’s Phase 1 is already validated through the POC and our team has now moved to Phase 2.

[Check the ‘to date story’ of developing this project via our Nova learning management case Study.]

We have explored and aided everyone to understand the real impact of Blockchain technology on the economy.

So far, we have grown to a team of 30+ experts with profound knowledge of Blockchain technology and its application in different sectors. We have developed 5 white label solutions and delivered around 50+ projects catering to diverse business needs.

Currently, we are working on more than 4 blockchain-based projects. Where one is an NFT-based bidding platform, the other is a cryptocurrency exchange platform.

Likewise, one is a GDPR compliant bulk data-sharing platform which is built on a private blockchain, and another one is a platform showing how blockchain is revolutionizing healthcare, aka, a platform for keeping healthcare records intact and offer insurance in a seamless manner.

Awards and Recognition Received by Appinventiv in Blockchain Era

Because of our continual efforts into the Blockchain domain – both in terms of sharing information and building innovative projects, we have been gaining accolades from varied reputed platforms.

We have been recognized as top blockchain development company by Clutch, Appfutura, Manifest, and TrustFirms. Also, we are covered in several reports because of our experience in creating and managing Dapps, such as that of MobileAppDaily and Builtin.

Our Future Plans in the Blockchain Domain

Talking about the future, we are looking ahead to emerge out as Blockchain agnostic in the market. We are planning to go deeper into the Blockchain spectrum and bring better solutions for the challenges associated with traditional business strategies/processes globally.

Besides, we are hoping to work more on government-focused projects; bringing difference in the lives of many at the same time.

In addition to this, we are starting hackathons workshops, training sessions, and other such events to share our knowledge with others and prepare them for the decentralized future.

Geographical distances should not be a roadblock to collaboration and creativity. Who understands this better than a digital product development team? Going by this sentiment, for a process that lays down the basics of creativity and collaboration at the product ideation stage - Design Sprint - the steps should be least complex.  While good to…

Less than 25% of mobile app users come back after day one and Only 4% of the customers who are upset about the app, actually complain. Add this grim situation to the fact that only 29% of the mobile app developers do extensive testing and you will get a situation where while QA has become…

“Every mobile application becomes successful through its functionality, code, and calculations, regardless of how it looks and works”, this sounds like an absolute fluke, I agree. Nowadays, when we talk about mobile applications there is an immense need for an exceptional UI and UX as much as a perfect backend code. UI/UX and visuals are…