What is Zero-Knowledge Proof & its Role in the Blockchain World?

Over the past few years, we have become accustomed to the way large banks and other firms access and employ our personal information to deliver us an enhanced experience. We have over time given them a ‘green signal’ to the mechanisms that use our sensitive details to help us sustain in a certain way.

But then entered the Blockchain technology and it totally changed everything.

[Before we look further, we strongly recommend taking the time to understand the basics of Blockchain.]

But, has Blockchain really succeeded in doing so?

In one word, the answer is NO.

Many blockchain networks use public databases. So, anyone having an internet connection can view the list of the network’s transaction history. They can see all the details associated with the transaction and your wallet details, but the name of the user will still be unknown to them. Instead, they will come across as a public key – the unique code representing the user on the blockchain network.

This way, the public key created via the cryptography technique safeguard your privacy to some extent. But, it is still possible for one to expose you via other techniques.

This put your anonymous cover blown; debunking the myth of Blockchain’s anonymity and privacy, and make you realize that –

The user’s sensitive information stored on a Blockchain network is only confidential, not anonymous.

This, as a whole, gives a clear indication that Blockchain is not that anonymous and decentralized as many of its enthusiasts believe it to be. And even gives birth to various questions, such as –

Do Blockchain networks really need to be anonymous? How can Blockchain offer more anonymity and better privacy protection to their users?

In the present Blockchain networks, the transactions are recorded in the public ledger and are transparent in nature. Because of this, various reputed brands and markets like Wall Street are hesitating to adopt this technology as the confidentiality of client and transaction is a must for them. This, as a whole, is questioning if at all Blockchain web 3.0 will be able to impact businesses.

Coming to the second question, there are various concepts and methods like Coin mixing, Ringct, and Coin Join that are making transactions anonymous in Blockchain, but the one that is highly appreciated is Zero-Knowledge Proof.

The one will cover in detail in this article.

So, let’s begin with a simple definition of zero-knowledge proof.

What is Zero Knowledge Proof?

Zero-knowledge Proof is an encryption scheme proposed by MIT researchers Silvio Micali, Shafi Goldwasser, and Charles Rackoff in the 1980s. In this method, one party (Prover) can prove that a specific statement is true to the other party (Verifier) without disclosing any additional information.

With definition being cleared, let’s take an example to understand how zero knowledge proof works.

Suppose, two children – Bob and Alice, have received some candy bars from a party. Bob wants to know if Alice has got the same number of candy bars or not. But, at the same time, none of them is ready to reveal the exact number.

Then, Bob keeps the key to the box that defines the number of candy bars he received in his pocket (let’s say he got 30 candy bars) and throws away the keys of all other boxes. And he leaves the room.

Now, Alice enters the room with 4 small pieces of paper and writes ‘+’ on one of them while ‘-’ on every other. Here, ‘+’ denotes the number of candy bars she got, while ‘-’ represents every other value.

She slips the paper piece with ‘+’ sign in one box (let’s say in the one representing 20 candy bars) and ‘-’ in the rest of the boxes. And she leaves.

Now, Bob enters the room again and opens the box whose key is in his pocket. Then, he checks if the box has a piece of paper with ‘+’ sign or ‘-’ sign. If it’s a ‘+’ sign, he realizes that Alice has an equal number of candy bars. While, in the other case, she doesn’t.

As we know that Alice has 20 candy bars and Bob has 30 candy bars, it is clear that Bob will find a ‘-’ sign in the lockable box whose key he has. This will make him clear that they both do not have the same number of candy bars.

At the same moment, Alice will re-enter the room and find a ‘-’ sign in Bob’s hand and she will also come to know that they have a different number of candy bars.

Note: By this method, Bob will learn that they do not have an equal number of candy bars. But, he will still have no clue if Alice has more or less candy bars than him, and vice versa.

Thus, the zero knowledge proof maintains the privacy of users’ sensitive information, while making a transaction (in this case, the transaction is finding if they have the same number of candy bars or not).

Although this example would have helped you in understanding what exactly is Zero Knowledge Proofs (ZKPs), let’s refresh the concept with an image- 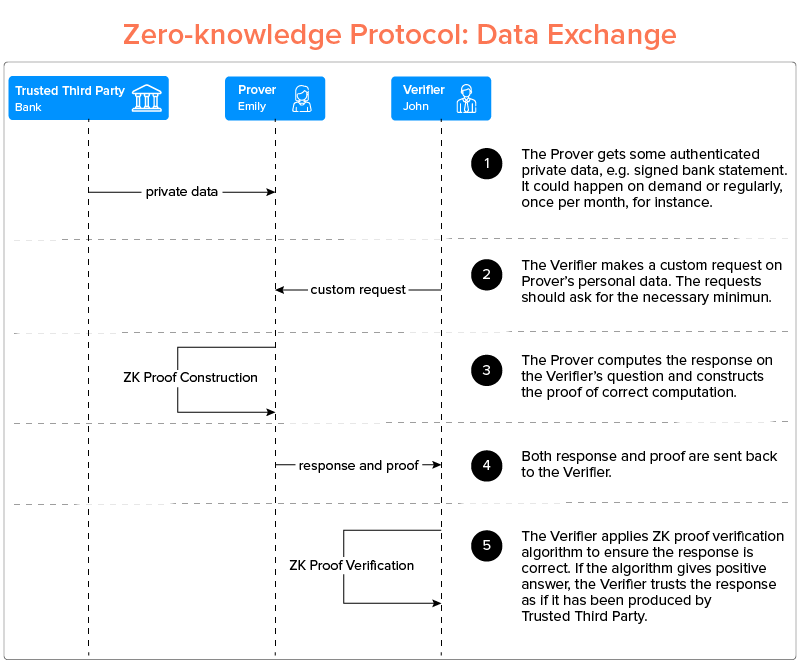 Now, as the concept of zero-knowledge proofs (ZKPs) is explained, it is the best time to look into what makes everyone prefer it over other available options.

While these are the pros of Zero-knowledge proof, the concept has some disadvantages as well. A few of which are:-

With this covered, let’s dig deeper into the technicalities before we evaluate when and how Zero-knowledge protocols can be introduced into the Blockchain ecosystem.

Starting with what are the core characteristics of a zero-knowledge proof.

If the statement is true and both users follow the rules religiously, then the verifier would be convinced without any external help.

In both cases, verifier won’t be able to know any information beyond that the statement is true or false.

While the principles of Zero Knowledge Proof are covered, let’s talk about the different types of ZKPs a business enthusiast can invest in.

In an interactive zero-knowledge proof, a prover performs a series of actions under the mechanism of mathematical probability to convince the verifier of a particular fact.

As depicted from the name, Non-interactive zero-knowledge proof does not require an interactive process. Meaning, the prover can generate all the challenges at once and verifier(s) can later respond. This restricts the possibility of collusion. However, it requires additional machines and software to find out the sequence of experiments.

Where to Implement Zero-Knowledge Proof in Blockchain System?

In messaging, end-to-end encryption is imperative so that no one can read your private message besides the one you are communicating with. To ensure security, messaging platforms ask users to verify their identity to the server and vice-versa.

But, with the advent of ZKP, they will be able to build an end-to-end trust in the messaging world without leaking any extra information. This is one of the prime applications of zero-knowledge proof in the blockchain world.

Zero-knowledge proof can also facilitate transmitting sensitive information like authentication information with better security. It can build a secure channel for the users to employ their information without revealing it. And this way, avoid data leakage in the worst scenarios.

Another possible use case of zero-knowledge proofs (ZKPs) is in the field of storage utility.

Zero-knowledge proof comes with a protocol that not only safeguards the storage unit, but also the information within it. Needless to say, the access channels are also protected to give a seamless and secure experience.

When talking about sending private blockchain transactions, it is utterly important to keep it out of the reach of the third parties. Now, while the traditional methods are somewhat protective, they have some loopholes.

This is yet another area where ZKP comes into play. The concept, when integrated wisely, helps in making it nearly impossible to hack or intercept the private blockchain transactions.

Since zero-knowledge proof has the potential to encrypt data in chunks, it enables one to control certain blocks to provide access to a particular user, while restricting access for others. This way, the concept protects the complex documentation from those not authorized to see them.

Another place where you can see an effective zero-knowledge proof implementation is the file system.

The concept adds different layers of security to the files, users, and even logins that makes it quite difficult for one to hack or manipulate the stored data.

ZKP adds a high-end security level to every block containing sensitive banking information like your credit card details and history, such that banks need to manipulate only required blocks when a user requests for information. Other blocks remain untouched and thus, protected.

So, these were some of the use cases of zero-knowledge proof in the blockchain environment. To make your brand presence in the market by building one of these, hire a blockchain app development company.

And in case you are confused about its real-world implementation, check for the following existing projects operating with the convergence of two.

Real-Life Examples of Convergence of Zero Knowledge Proofs and Blockchain

ZCash is an open-source and permissionless blockchain platform that offers the functionality to keep transactions ‘transparent’ and ‘shielded’ as per the requirement.

ING is a Netherlands based bank that has introduced its own zero-knowledge blockchain. However, they have modified their zero-knowledge system to make it a zero-knowledge knowledge range proof to lower down the need for computational power.

This way, they have prepared their zero-knowledge system to elevate the impact of blockchain in fintech.

The company uses Zerocoin protocol, which is based on zero-knowledge proof, to enhance security and anonymity in the transaction process. However, what makes it distinct from other projects working on this concept is that it offers scalability too.

Though various international actors have started showing an interest in implementing the concept of zero-knowledge proof into the blockchain, the adoption pace is too slow. And the prime reason behind is the following set of challenges associated with the addition of ZKP into the blockchain environment.

Challenges You Might Face While Integrating ZKP into Your Blockchain Project

Since blockchain technology itself is at its early adoption stage, there are no standards, system and homogeneous languages that enables app developers and business prospects to interact with the concept of ZKP and harness its potential in an efficient way.

Another challenge that restricts the adoption of zero-knowledge proof in the blockchain environment is scalability, provided such algorithms require high computing capacity to operate on a high level.

Now that the concept of Zero Knowledge Proof and its scope in the Blockchain domain (along with real-life examples) is clear to you, we expect to find you investing in the broader application of the concept while stepping into the decentralized world. But, in case you still have any queries, connect with our Blockchain consultants.