Over the last few years there has been a big research surge on Blockchain Technologies and simultaneously there have been many attempts at integrating them for a myriad of business applications.

Almost a decade ago Satoshi Nakamoto, the popular name behind the bitcoin development, bitcoin white paper author, and creation and deployment of bitcoin’s original reference implementation described how blockchain technology could be utilized to resolve the problem of maintaining the order of transactions and to escape the double-spending problem, and privacy issues. 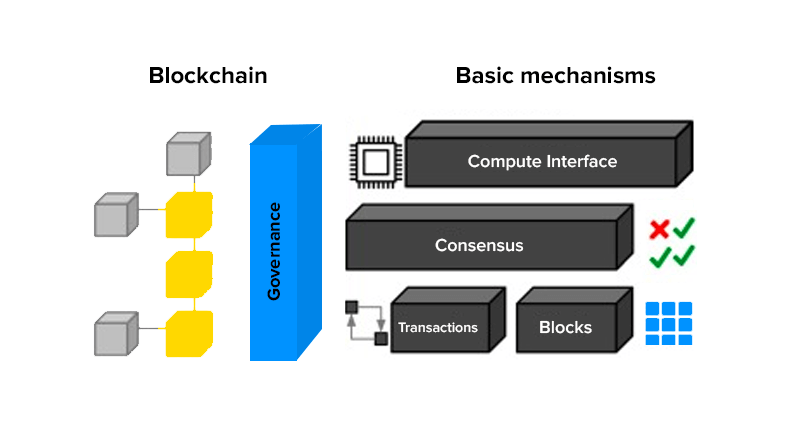 Some of the blockchain forecasts are interesting and intriguing at the same point, making the market turn heads toward this growing technology.

According to a report by Grand View Research, Inc., the global blockchain technology market size is expected to reach USD 394.60 billion by 2028.

A survey on eight banks by Accenture Consulting shows that the potential savings on a cost base of $30 billion are more than $8 billion.

According to another blockchain statistics for business benefits of a blockchain shows that 23% of respondents cite value chain and new business models as the main reasons for blockchain adoption by industry. Another 23% claim that they would do so for a higher degree of security.

Benefits of blockchain have the attribute to provide KYC, security, anonymity, and data integrity without any third party organization while controlling transactions, and therefore it builds interesting research areas, especially from the perspective of technical challenges of blockchain and limitations.

Through our understanding of blockchain and its attributes, we present a bunch of key Blockchain Value Propositions and how it can complement the development of digital platforms and various blockchain industries.

Furthermore, when we look at blockchain beyond cryptocurrencies, then there are a total five fundamental propositions related to Blockchain development that should be treated as rules while making software, business models, markets, and governments on Blockchain.

The value propositions offered by Blockchain adoption, fabricate the establishments of a system of values of blockchain and qualities that could construct the outline for the coming time of the digital economy and Internet 2.0. The five regions that Blockchain has demonstrated to make value includes:

One of the values of blockchain is trust that doesn’t come from an external source but from the participating peers inside. This implies that trustworthiness, honesty, responsibility, and transparency of communications and exchanges are combined into the Blockchain’s decision rights and incentive structures, and the blockchain tasks are distributed among nodes, not vested in a single member. This in reality implies that acting without integrity is either outlandish or it costs excess of time, cash, and energy.

On the current version of our Internet (for example Internet 1.0), the vast majority of the data is flexible and brief, where the specific date and time of its publication isn’t critical to past or future data. On a blockchain, the reality of the present depends on the details of the past.

Bitcoin’s development across the blockchain network is for all time marked from the moment of its coinage. For a Bitcoin to be valid, it should reference its history and the historical backdrop of the Blockchain. The Blockchain should be therefore protected completely, guaranteeing network integrity through sharp code rather than through individuals.

With the business benefits of blockchain, by moving forces towards citizens and offering them genuine chances for success and cooperation in the society, one could together work to assemble trust and confidence in the present institutions or even form new open and private establishments.

Volunteers (blockchain users) keep up with the records by keeping their duplicate of the blockchain records up-to-date and loaning spare processing capacity to mining power. Each exchange or activity is communicated across the network to be checked and approved. Nothing goes through a focal third-party or put away on a focal server.

According to Nguyen, Blockchain is relied upon to play a fundamental part in the sustainable development of the worldwide economy, carrying advantages to consumers, to the current financial framework and the entire society in general.

Investing in blockchain technology has become top blockchain trends because of its job as the database for cryptographic forms of money and digital exchanges.

It’s the improvement of trust, transparency, and productivity that has changed blockchain tech into an attractive investment prospect. Blockchain has applications in a wide scope of industries, where the organizations carrying out blockchain tech will acquire an upper hand over rivals.

All the more comprehensively, blockchain in different industries can likewise include investment in organizations that work explicitly with digital money, (for example, Square, crypto payment platform) and those that have invested resources into crypto (like MicroStrategy).

According to a research by Statista, the use of blockchain technology in the financial sector is expected to develop in the coming years, reaching a market size of U.S. $ 22.5 billion dollars by 2026. 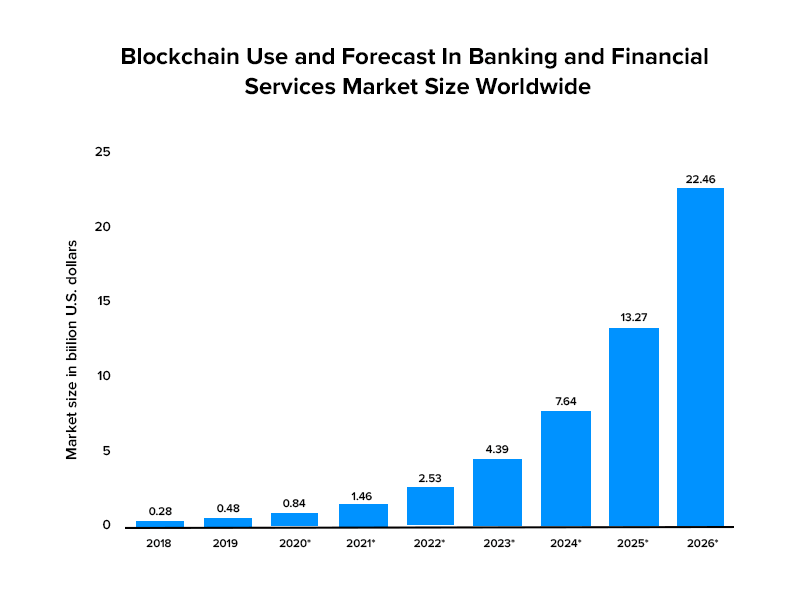 Blockchain networks include wellbeing and safety measures with no weak link. They provide secrecy and credibility of records, implying that a digital signature can’t be denied. Any individual who wants to take part in the blockchain should use cryptography. Any reckless conduct doesn’t jeopardize everyone, it just influences the individual who acted foolishly.

With the ever growing use of digital solutions in our regular day to day lives, innovative security will mean personal security. Today, hackers are everywhere to take advantage of the technology. Thus, with the safe design and transparency of a Blockchain like the Bitcoin, you can make transactions of value worth secure and protect personal information.

Blockchain creates systematic value which can be seen in digital certificates, which are another solution for our present digital security. They’re bits of code ensuring messages without the requirement for asymmetric cryptography, where clients pay a yearly charge for their certificates.

With such security, entrepreneurs are understanding blockchain technology and making use of this  technology in their businesses.

Privacy, due to its anonymity characteristic, is a fundamental attribute in the Blockchain environment. High integrity of exchanges and security, and protection of nodes are expected to prevent assaults and attempts to upset exchanges in Blockchain.

Today, numerous individuals are unaware of how much security they deal with consistently, on the web. We leave digital impressions and trails each day for tech giants and site owners to change over into detailed guides of our whereabouts.

With the technology of blockchain and data privacy one holds substantially more responsibility and ownership over personal information and provides what’s needed in any social or economic trade. Also, whenever you decide to give information of significant worth, you can request something of significant worth in return. This is one of the reasons why individuals are opting for blockchain over traditional databases.

In a Blockchain app development agency, a distributed agreement network without a trusted party, all of the exchanges are transparent and reported to people in public. Hence, blockchain and data privacy with blockchain in different industries is kept up with the breaking of the progression of data. General society can see all exchanges, but without data linking the transaction to identities.

If you are interested to know more about fundamentals of blockchain then you can click on this link to read more.

There is a promising and arising pattern towards blockchain adoption. Right now, Bitcoin’s adoption rate is about 1%, but with shortage and demand comes value appreciation. Thus, as the adoption develops, there is trust that Bitcoin’s worth will increase generously.

The goal of the systematic value is to examine the current status and make use of Blockchain technology in every field possible for better privacy and security. There are many challenges of blockchain and several solutions to those challenges and limitations are being presented or prepared. What we need is knowledge and the working of blockchain.

New technologies are emerging quicker than one can think. Emerging technologies like big data and blockchain are becoming conventional. Such technologies are changing the way organizations do their business. It is assumed that these two technologies are stand-alone and are being employed independently. However, while data science deals with finding insights from raw and unstructured…