5 Technologies Taking Social Media Towards Its Next Evolution Set

From a time when an old school telegraph was considered to be the hottest medium of establishing communication to now when Facebook has doubled down its effort on the development of a mind-reading device, social media has already crossed several stages of evolution. Stages that have established it as a sector that is here to stay and grow.

One of the pivotal factors behind the unprecedented growth that the domain is witnessing both in terms of users and scope of constant growth is the technology used in social media. 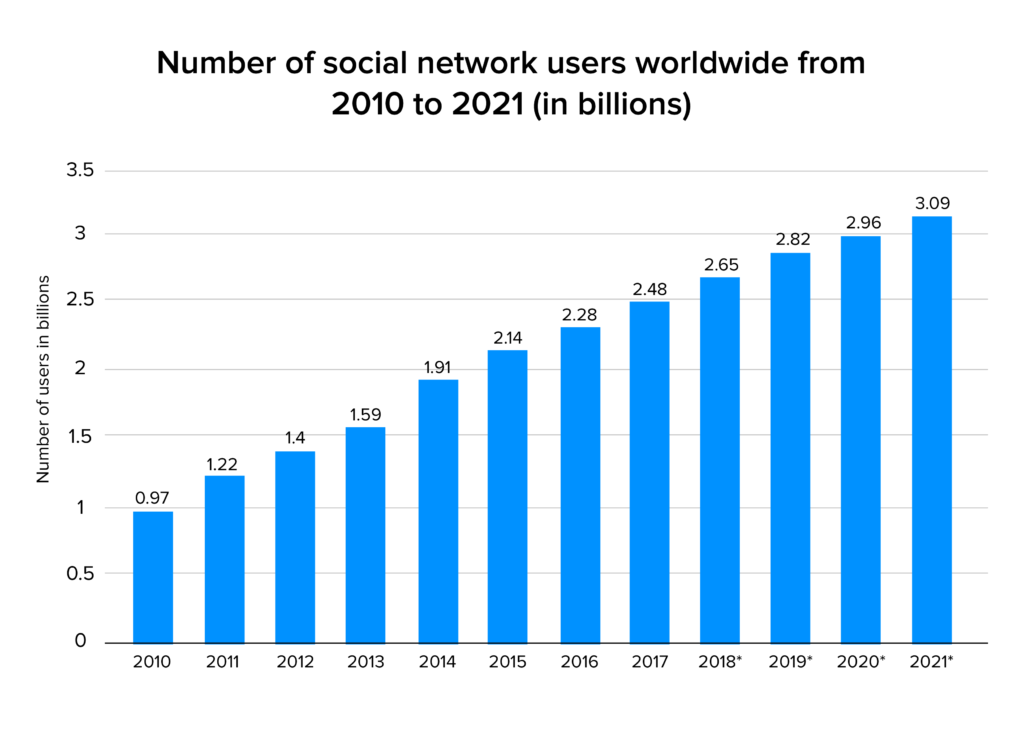 These number projections are the direct result of the direct influence of technology on social media. The constant inclusion of communication and content creation, distribution aiding technologies like native mobile apps – getting business access to users’ camera and GPS – geotagging, AI for image recognition, etc. have helped shape the current stature of the social media domain on a global scale.

In this article, we will be briefly revisiting how far social media technology innovation has come since Six Degrees, the platform that ruled 1997 followed by a look into the new technologies for social media.

The Evolution of Social Media – A Timeline and Key Events

The future of social media technology began in 1997 with SixDegrees.com, the first social media site. The platform enabled you to create a profile page, curate a list of connections, and send messages to your network. At its peak, the website was used by over one million users before being bought over for $125 million and facing an ultimate demise in 2001.

The failure of Six Degrees, like its success, was followed by a number of social media networks. Around the time and early 2000s a number of new social media platforms like Friendster, AmIHotorNot.com, MySpace emerged and witnessed their decline in the domain. 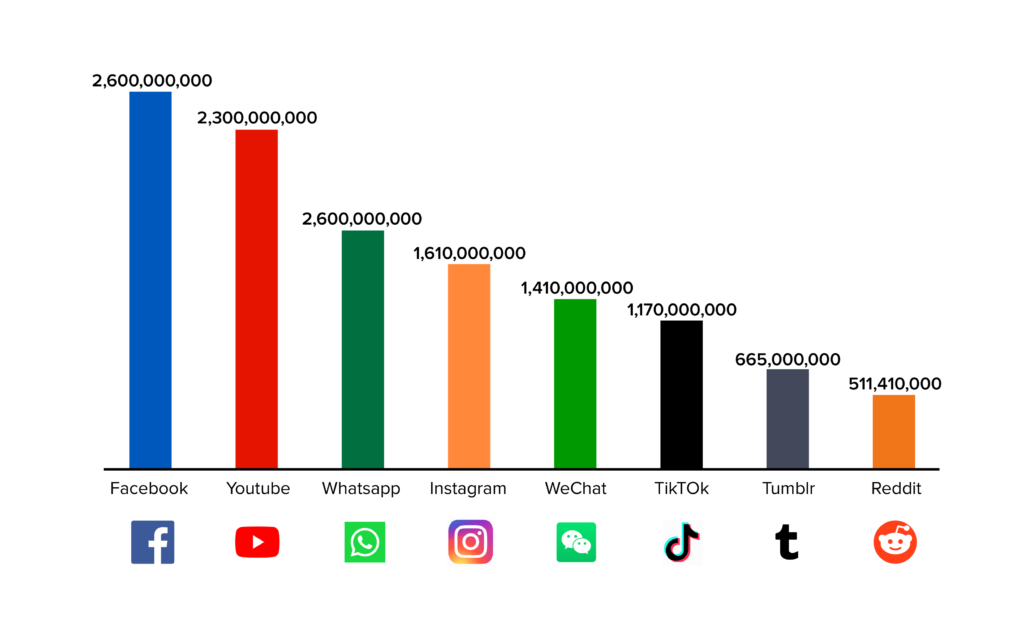 In addition to these, there were some other key names in the social media technology evolution landscape – LinkedIn, foursquare. Grindr, Pinterest, Snapchat, amongst others.

An unvalidated fact behind the growth and sustainability of the selected social media platforms can be seen in the incorporation of the right technology in the domain. Let us delve into it deeper.

The Importance of Technology in Social Media

The role of technology in social media evolution, although starts with the advent of smartphones and laptops on a precise level, begins with mobile apps. In 2019 alone, it was estimated by a Lyfemarketing report that over 91% of all social media users use social channels through mobile devices.

There can be a number of reasons behind the rise in mobile application adoption for social media usage:

We believe that up until this point you must have gathered the need for social media application development. However, the list of the impact of technology on social media doesn’t just end with one component. There are a number of other technologies like APIs, geotagging, QR codes, etc which have contributed to making social media where it stands today.

Technology incorporation makes social media accessible, safe, and real-time in addition to making the sector operate seamlessly with users’ experience through the mode of automation, integration with other social media applications, and ecommerce.

With the benefits of technology and social media peeked into, let us move on to the list of technologies that are helping social media app developers take the sector to its next evolution set.

RFID, in layman terms, means a small computer chip that can store information about an individual or object. Every chip comes with a unique serial number that can be tied to the information present on the chip. Let us give you a practical application of this technology through this example – Suppose you are at a music concert and you scan your RFID device with an RFID device which has social features integrated into it. By simply bringing your RFID device to the other one, you will be able to Like a band on Instagram or Facebook or download a couple of their music tracks on your device.

The growing popularity of RFID in the event and ecommerce domain (through the mode of NFC) has led to a number of social networking app development companies integrating RFID into their mobile applications.

AR and mixed reality are some of the most popular social media application features. There are a number of use cases that social media houses experiment with when integrating AR with their applications but the one that has witnessed mass popularity is the use of face filters. Popularized by Snapchat, AR-driven filters are used by both individuals and businesses to deliver engaging content. 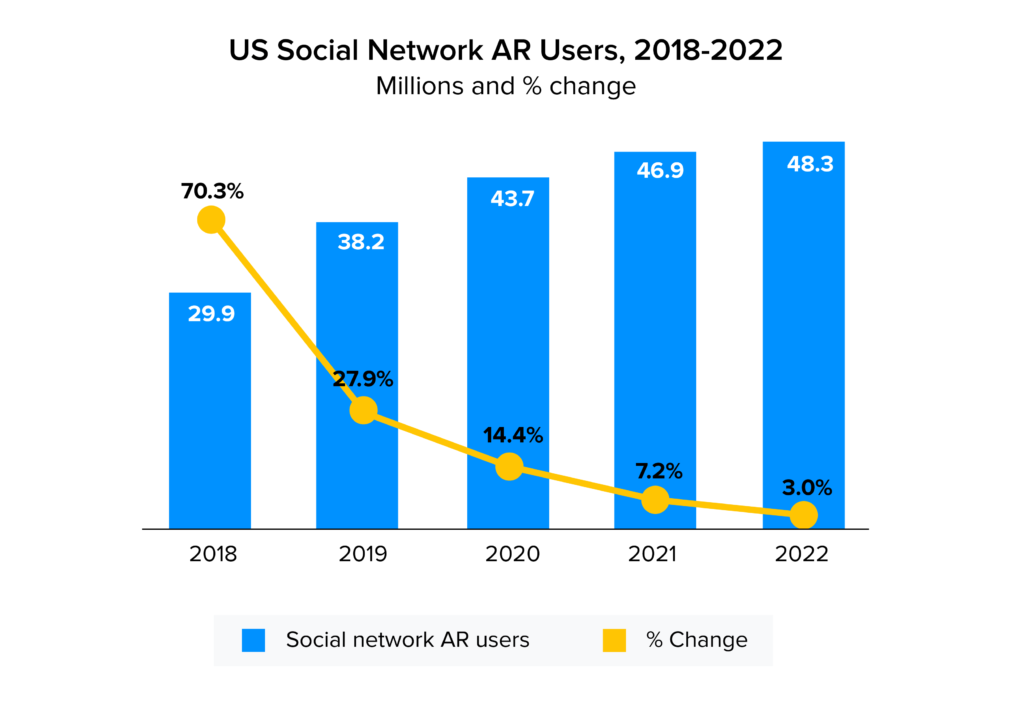 Another example of business-level usage of AR in social media can be seen in social media advertisements. Last year, Snapchat created an AR-based app for Snap Original where Bhad Bhabie interacted with the users as if they were interacting in the real world.

Out of all the new-age technologies that you will read about impacting the social media sector, the one name which will be placed on the top is Artificial Intelligence.

AI is a prime component of every social media platform active in the market today. This is the number one reason why the technology is now involved in the social media app development cost on a default note.

These business examples are a validation of how AI is a crucial part of all the different genres of the social media domain.

Decentralized social media is one of the most up and coming genres of the social media sector.  There are a number of use cases of social media and blockchain convergence which businesses from both sides are experimenting with. Here are some of them –

The last in our list of social media and technology trends is the Internet of Things. The technology is used heavily for social media monitoring and marketing purposes by some of the top names in the industry like N&W, Disney, and Tencent, etc.

Organizations are constantly on the lookout for an IoT skilled social media app development company that would help them create solutions around real-time monitoring of data and insights coming in from social media to help them make better business decisions.

Here were the five technologies which are taking the social media sector towards a new evolution era – one that will be a lot more open and transparent in nature. Want to be a part of the revolution? Contact our team of social media experts.