How To Determine The Cost of MeWe App Development?

When it comes to social media networks, Facebook is certainly one of the most popular choices available. However, a lot of people who care about their privacy have been looking for an alternative, and that’s where MeWe comes into play.

MeWe’s CEO, Mark Weinstein, in his Wall Street Journal op-ed, wrote, “MeWe is a full-featured social network engineered with privacy-by-design that’s freemium-based with no ads, targeting or news feed manipulation. Marketers and election meddlers cannot target or boost anything to anyone. These are significant competitive differentiations.” Weinstein also adds that, “It’s gratifying to see MeWe flourishing worldwide. MeWe is the uplifting social network with the features people love, and the respect, control and data privacy we all deserve.”

Technology is taking social media by storm, let’s see the most buzzing social platform that is taking the internet and individuals into a completely new and safe arena.

Moving further, let’s read in detail what is MeWe, how to use MeWe and who owns MeWe?

What is MeWe App?

MeWe is a social media network based on a subscription model that focuses on privacy. The MeWe site terms itself as a ‘Next-Gen Social Network’ by providing users an ad free experience.

It has become extremely popular as a business-focused product that takes enterprise networking and communication to a completely new level.

Who owns MeWe? The application was founded by Mark Weinstein, an entrepreneur who considered himself as one of the early developers of the concept of social media. As of now, the MeWe free app has millions of users and is thriving as a popular privacy-focused alternative to Facebook.

Earlier, Weinstein launched a company named Ello, and based on the challenges he faced during that time, he learned several lessons that allowed him to shatter the social media dominance of Facebook.

Although the platform is free to use for personal users with several features like 8 gigabytes of storage, customized stickers, voice and video support, and newsfeed, enterprises are required to pay $1.99 per month to access additional features.

Now we know what is MeWe app, how to use MeWe and what is mewe used for, let’s move on further to discuss why there is a need for MeWe app development.

Why There is a Need for MeWe App Development?

It’s a no-brainer that Facebook is the most dynamic and popular social media network that has dominated the social cult ever since its initial launch. From job postings to community management, it includes a myriad of features that keep a user hooked and engaged to the app.

According to their most recent update, Facebook has employed an algorithm that observes your behavioral patterns and deciphers them to serve you manipulated content in the application. This makes it more of a target-based platform that displays content as per your past preferences and choices.

In the wake of WhatsApp and Facebook data breach controversy, people are looking out for new social media platforms that are safe and secure. MeWe, a US based social network has come to the rescue and becomes the top downloaded social app in the Play store. MeWe free app for android and MeWe free app for iPhone has led to the increase of new users in the apps counting to more than 2.5 million users.

With the help of MeWe app development, you can keep your privacy protected by preventing targeting, ads, and political biases. You can check MeWe reviews to see that the app is gaining a lot of popularity among people. 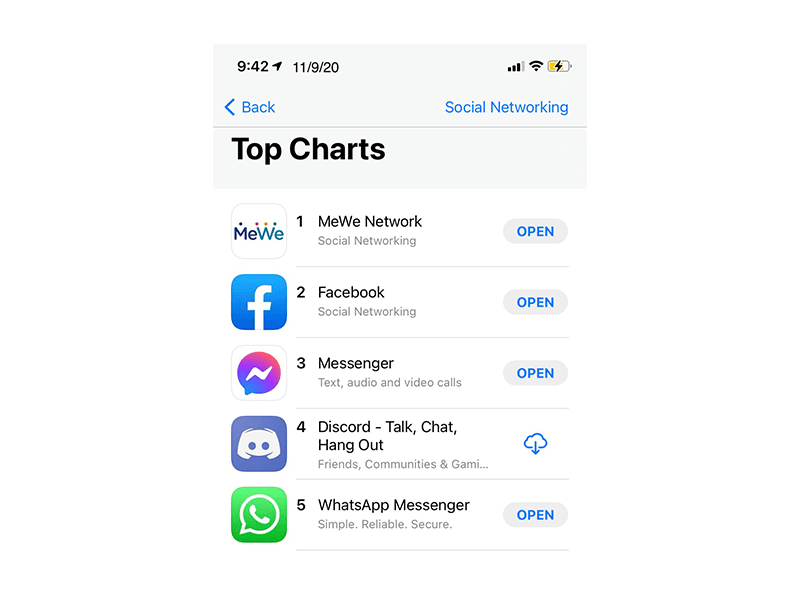 If you take a look at several social media networks available, you will notice that there are certain common features that each of them share. To be able to determine the cost of MeWe app development, you need to consider keeping these essential features in mind.

Moreover, as you introduce other specific features to your application, you will notice that the MeWe app cost will definitely bump further. With that said let’s take a look at some fundamental features required while developing the MeWe app:

What you get with MeWe?

Your application needs to provide users the ability to express themselves through their personal profiles. It includes allowing them to enter their personal details such as name, address, website, email, birth date, and even mobile number.

A proper authorization mechanism acts as the foundation block of the privacy and data of your users. Therefore it’s certainly a must-have feature in your MeWe application. It involves letting users signup and login in to your platform through their phone numbers or email addresses. Additionally, it also requires a password recovery and reset mechanism, some security interventions, and several other features.

As you’re trying to make MeWe social media platform you surely need to ensure that your users have a proper communication channel. Moreover, in addition to simply sending texts, you may also need to add the ability to send media files such as messages, videos, and stickers through chat. The development cost may even vary depending on whether you want to allow your users to have group conversations or not.

To make the usability of your application easier for users, you need to include a search function that allows them to access the profile of their friends, communities of their interest, and posts they find engaging.

Apart from the crucial features, the design of an application is certainly one of the most important aspects because that’s what makes your creation unique. This may also be the costliest part of your MeWe social media app development process. While getting the user interface designed for your application, you need to make sure it looks attractive and provides an aesthetic feel to your users.

How is MeWe different from Facebook and Other Social Media Platforms?

Unlike other social media apps, MeWe social app has a different concept which does not replicate every other social media site. The MeWe creator’s intent is very clear when it comes to marketing the platform, as it has been directly indicated in interviews that MeWe social network app wants to be the alternative to Facebook.

This most likely clarifies why the site attempts to imitate Facebook’s UI. Users can offer thumbs up, hearts, and smiley icons to posts. They can share their posts on their different feeds. There are user profiles and separate pages, and groups feature for individuals to assemble around a particular theme or topic. MeWe social network reviews are also mostly positive.

The below image will show you which are the top categories and apps used by users.

When you’re developing an application like MeWe, it’s evident to say that there’s no specified cost associated with it. The expenses that you may incur depend on the functionality, complexity, and comprehensiveness of your application.

Additionally, as you keep adding more features, the costs will keep piling up. It’s also worth determining the total number of hours required to complete the development phase of your application, in case you hire social media app builders on the basis of hourly payment. Therefore, make sure you keep all these things in mind while determining the social media app development cost of your MeWe social network application.

As Facebook made changes in its policies and tampered with its user’s privacy, people began looking for safer and more privacy-oriented platforms. This calls for the need for MeWe application development. While making an application like MeWe, you need to consider several things such as core features, UI design, and a lot more.

Additionally, to determine the costs associated with the development of this application, you may also need to consider several aspects like mode of development and required time. Hopefully, you may have found this guide helpful to come up with an estimated development cost for your application.

Still if you have any doubts regarding what is MeWe development costs, or are finding difficulty in hiring a social media app development agency in USA, just contact us.

MeWe is the quickly developing high integrity social networking site with every one of the social features that individuals love alongside no promotions, no ads, no targeting, and no news feed manipulation.

Q2. Which devices is MeWe available on?

MeWe is available on devices that include: iOS, Android, and Desktop.

At MeWe, you can securely share images, recordings, memes, videos, documents, voice messages, Dual-Camera MeWe’s chats, GIFs, doodles, disappearing content, stories, and, much more. You have the option to communicate one on one and in private groups with your contacts, family, colleagues, friends, and in open groups with other MeWe individuals with whom you share a common interest or hobby. MeWe has numerous open groups. Due to these features, MeWe reviews are good on Play Store and App Store.

So, is MeWe safe? Privacy and security is the essential focus in all that MeWe does. At any time you can download all of your content and erase your account which totally deletes all the content and posts you have shared on MeWe.

MeWe doesn’t use any cookies, face recognition programs, spyware, and no GPS beacons. They don’t gather your information or offer your data with any third-party sites except if you, yourself, request it, for example, on account of associating through Facebook, Twitter, and so forth to invite friends or to join MeWe.

Q5. What are some unique features of MeWe?

MeWe has many features, some of them are:

MeWe is free to join, but some of its features do cost money. The free services include newsfeed, private and groups and group chats,voice messaging, and more.

MeWe is owned by Sgrouples, a company based in Culver City, California.

How Much Does It Cost to Develop a Wayfair Like App?

Have you heard about a wayfair app? Well!! Wayfair, one of the best app for home decor shopping is an e-commerce organization for home and décor items that have attracted thousands of customers. With that said you can for yourself see that nowadays developing an app has become a new trend for business owners. The…