Google has now finally released its much awaited messaging app, Allo. Initially, it demoed this app’s abilities at Google I/O 2016 back in May with several features like temporary private messages, end-to-end encryption and AI-powered response prompts for replying without typing. However, now the public version is available to Android and iOS devices and now apart from being a multi-functional messenger application, it now acts as a virtual design assistant dubbed as the Google Assistant.

There is no need of a Google account to sign up and as a result, you just need to enter your phone number and you are done. This app works on only one of your devices at a time and with this app, you have the chance to chat with anyone from your address book, but if someone from your address book don’t have Allo then SMS messages will be send to that person’s phone. This message will be free of cost for you, but it will cost them as per the carrier plan of their mobile for sending and receiving text. On the other hand, once your contact signs up to use Allo, you will get to see a message showing this.

After the signing up process you are able to send stickers, text messages which can be resized as per the needs and you can also send any video from your gallery or camera. In addition, you also have an option to add or draw text overlays on images. This amazing messaging app supports group chats also. You can name your group and add an avatar which helps you in identifying the group in the conversation list in a hassle free manner. It even works effectively with photos. For example when a friend snapped a picture of his pet and send it to you, then as soon as you received it, Allo will suggest several replies. 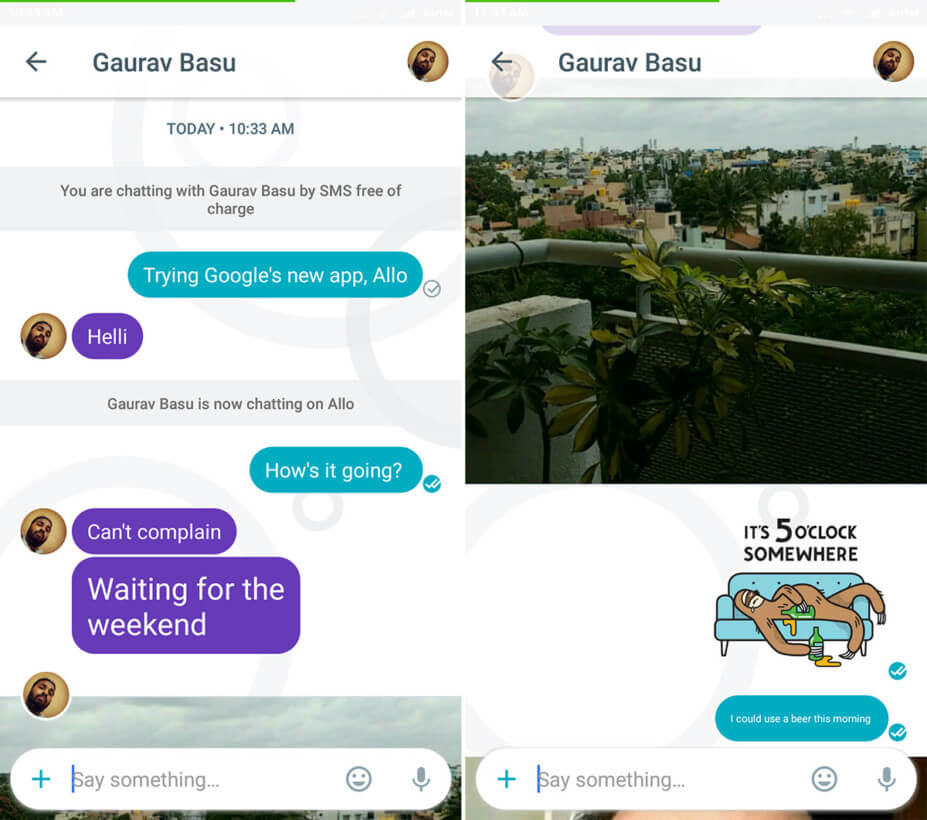 Google Assistant, which is powered by the company’s Advanced Artificial Intelligence (AI) has got some cool tricks. It acts as a search engine where you are required to enter the name of your favorite dish and it will recommend hotels which serves that dish. Furthermore, users can chat for the directions to any shop or destination. Initially, it will be available in English language, but will come with many more languages in the near future. It is especially useful whenever it pops into your conversations with your contacts. For example, if you are chatting about any movie you might want to see, you will see a message that you can tap to reveal show times and other information about the film.

You cannot miss another notable aspect of Allo which says that it is fully encrypted. It is said that when the user chats in Incognito mode, messages will have end-to-end encryption and it provides a couple of more privacy options such as message expiration time like Snapchat and discreet notifications. Allo is a well-built app and in order to increase its popularity, Google is required to market it properly.