Suppose you have a brilliant idea, one that you think would revolutionize the whole mobile app industry.
Now, of course, you will get a sense of urgency when it comes to protecting the idea from getting copied, right? Well, you are not alone.

Almost all the entrepreneurs who enter the mobile app industry with a revolutionary idea do so only after they have ensured that their idea will not be copied or stolen or modified by those with whom they share it.

This need to ensure that the idea is protected is what calls in the need of bringing a Non-Disclosure Agreement for mobile app into the picture.

But believe it or not, NDA for mobile app development is one of the most controversial topics in the mobile app industry. While on one side there are entrepreneurs who believe that they have a revolutionary idea that needs to be protected, on the other, there are agencies which, having seen it all, have come to an understanding that no idea is actually a one-of-a-kind idea, and so the presence of NDA only restricts them.

In this article, we will be looking into the whole NDA protection for mobile app conundrum in much detail, by giving you an answer to how to protect your app idea.

But, let us start with the basics first.

What is NDA for Mobile App Development

Non Disclosure Agreement or NDA for app development is a contractual agreement that states both the parties involved – Client and the Mobile App Development Agency will work to safeguard the confidentiality of the app idea and no matter what the situation is, they will not disclose the idea to any third party.

Now that we are done with the NDA for Mobile App Development definition, the next thing to look at is why do businesses even ask the mobile app development agencies for an NDA?

Why do Businesses Ask Mobile App Development Agencies for NDA

Even in the present day time when there is rarely an idea which has never been heard before, we get client queries almost on a daily basis asking for an NDA before they get on the introductory call.
The reason behind this emphasis on NDA for app development can be many but the ones that we have analyzed over the development of more than 700+ apps are –

In the service industry, it has become the norm to ask for the signing of NDA before any mobile app idea is shared and the trend has gotten so instilled in the whole industry that it has become a part of every mobile application development process guide.

And now, without even taking a moment back to analyze if it is even required, the mobile app industry has made NDA a quotient of agency’s transparent work culture. But the fact that there is nothing specifically wrong in giving the promise of safeguarding the app idea is something that has led to us carrying forward the tradition.

In an ode to winning the race, small level mobile app development agencies tend to suggest the idea, which should have been protected, to clients in order to appear well sound – something which gets protected when the idea is safeguarded with an NDA.

Now that we have seen the reason why businesses insist on the signing of NDA for app idea protection, let us now delve into the contents of the NDA to see exactly what is there in the document which would give businesses or entrepreneurs the guarantee that their idea is protected. 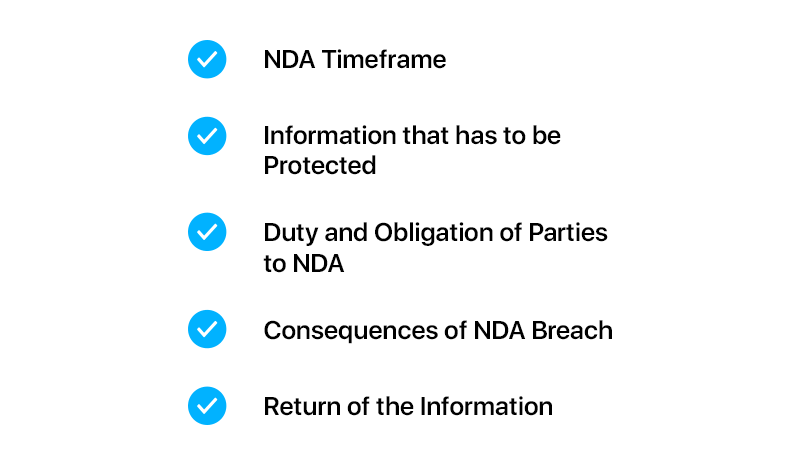 There should be a clause highlighting the timeline of safeguarding the idea. Generally, the NDA is signed for the time that ranges from the day when the idea is shared to when the mobile app development work starts.

2.Information that has to be Protected

In this section, the information or data which has to safeguarded by the agency is mentioned in black and white.

3.Duty and Obligation of Parties to NDA

This section will talk about the obligations and duties that the parties will have to cover to ensure that the app idea is safeguarded. This is the place where the actionable elements of how to protect your app idea are mentioned. It can have elements like the mode of communication that will be followed by the agency, the tools that they are supposed to use for development, etc.

The after-effects of NDA breach of app idea protection are clearly specified in the agreement. Usually, the consequences are in the sense of monetary terms but at times the grieving party can seek an injunction as well, thus holding the right to make a legal case if the agreement is breached.

5.Return of the Information

This clause makes it necessary for the agency to return or destroy the information or data that they have gathered from the client once the introductory call does not turn into a closed deal.

Type of NDA in App Development

Both the involved parties sign the NDA declaring that they both won’t reveal the information to the world.

The agreement involves three or more parties where all the involved parties are abided by law to not reveal the content of the information shared with them.

Now that we have seen the basics of the NDA concept, it is time to hit upon the questions that the mobile app industry faces with almost every deal – Should NDA be signed or should it be passed?

Without releasing the dragon of debate, let us simplify it by giving you the situations where NDA makes the most sense and where they don’t.

A. When you have a Proprietary Information

If you or your organization represent some concrete proprietary data which may be eligible for patent or copyright, it becomes mandatory for you to get an NDA signed.

B.When the contractor or freelancer is not against the idea

If the agency or freelancer you are getting associated with is not against the idea of signing an NDA, go ahead and sign it, but ensure that the agreement terms are too restrictive for either one of you.

C.If the project has to remain a secret

If there is a situation where the whole project has to remain hidden from the public eye, insist on getting an NDA signed. Doing this will prevent the agency from placing your project in their portfolio.

D. There is a need to maintain short-term secrecy

There might be instances that you would need your idea to be protected for short-term or a fixed period of time, in cases like these, it is best to get an NDA signed so that the information remains protected till the short-term passes.

A.When all you have is an idea

It is not uncommon for businesses to believe that their idea is something that will create a dent in the industry. But the truth remains, that rarely happens. So, until you have practical, statistical reasons to believe that the idea is indeed pioneering, don’t insist on an NDA.

B.When the Project is Short Termed

Having an NDA signed make sense when you are working on a long-term project or on some revolutionary feature, but if your project is short-term and something that the world has already seen, choose to stay away from NDA signing.

C.When your dream agency is against the idea

As entrepreneurs who are willing to get their idea transformed into a business, it is not uncommon for them to get fixated on one agency who they feel would do it best justice. If you too have an agency of this sort in sight and they are not willing to sign an NDA, take a few steps back and analyze if it’s really that important in the first place.

D.The information that you are trying to protect is public information

Let us explain this through an example. Suppose your next big idea is a take on the Uber app. Now, the industry has already seen a lot of those, so much so that it has become a public information or an idea that the masses have already seen. In a situation like this, it is best to stay away from the formality called NDA.

After all said and done, the one innocent question remains. Let us attend it now.

How long does a Mobile App Development Centric NDA last

There is no direct answer to it, it varies from one client requirement to another. Usually, the NDA lasts until the project and some months after that.
Also, every once in a while there are instances where the clients insist on signing an NDA for an indefinite period of time, but it is not recommended on the grounds of plain unjustification.

So, ideally, you should add the NDA tenure to just a few months after the app is developed or till the day of it getting published in the stores.

With this, you now know everything about NDA – What it is – clauses and types, why do entrepreneurs like you generally emphasize on having it signed, and the situations where they make the most sense and situations where they don’t, the time has now to keep our promise and give you the Sample NDA for Mobile App development that we use here Appinventiv factory.

Our team has prepared an NDA template for app development that you are free to use, you can download it here.

To make the whole decision of to-do or not-to-do a lot easier for you, our team of business development executives has also created an FAQ that answers some of the most common questions associated with the Non-Disclosure Agreement.