Can Blockchain Change How We Vote?

Unsurprisingly in a little under 5 years, the credibility of American elections is being questioned again, and this time, the doubts are coming in from the POTUS himself. And somewhere we agree with him. Voting as we know it cannot be fully trusted.

Traditional voting is often subject to speculations for either corruption if there are paper votes or phishing malpractices if it is an online voting system.

While both the mechanisms have their pros and cons, one huge step towards securing our elections could be with blockchain e-voting – a concept popularized by Thailand in 2018.

The Problem with Traditional Voting

Most elections necessitate voters to physically report to a polling station and cast their ballot with a paper vote. While in developed economies the process was more or less harmless, i.e., until COVID-19 struck, in developing and 3rd world countries instances of booth rigging are far too common. Having encountered the anti-trust wave from the masses, there are a significant number of countries that have thereafter switched to electronic voting machines.

But that is no silver bullet, if you would, against hackers who can penetrate sophisticated systems. This has already been demonstrated at the Def Con conference where relatively young-aged hackers sneaked into US electronic voting machines and exposed their vulnerabilities.

Poor voter turn-out is another problem. Be it an absence of inspiring candidates or lack of interest otherwise, it is hard to convince people to practice their right to formulate the government. Take 2016 for instance wherein 56% of the US voting-age population (VAP) turned up.

This figure positions the USA at 26th out of 32 nations in the OECD (Organization for Economic Cooperation and Development) for that year. Various other case studies indicate that a 3rd of non-voters didn’t have their say in constituting the government in 2016 due to failure to make it to the polling booths.

While this was about earlier elections, how secure do we deem 2020 US elections to be? Here’s what the respondents of a Black Hat USA Survey had to say about it: 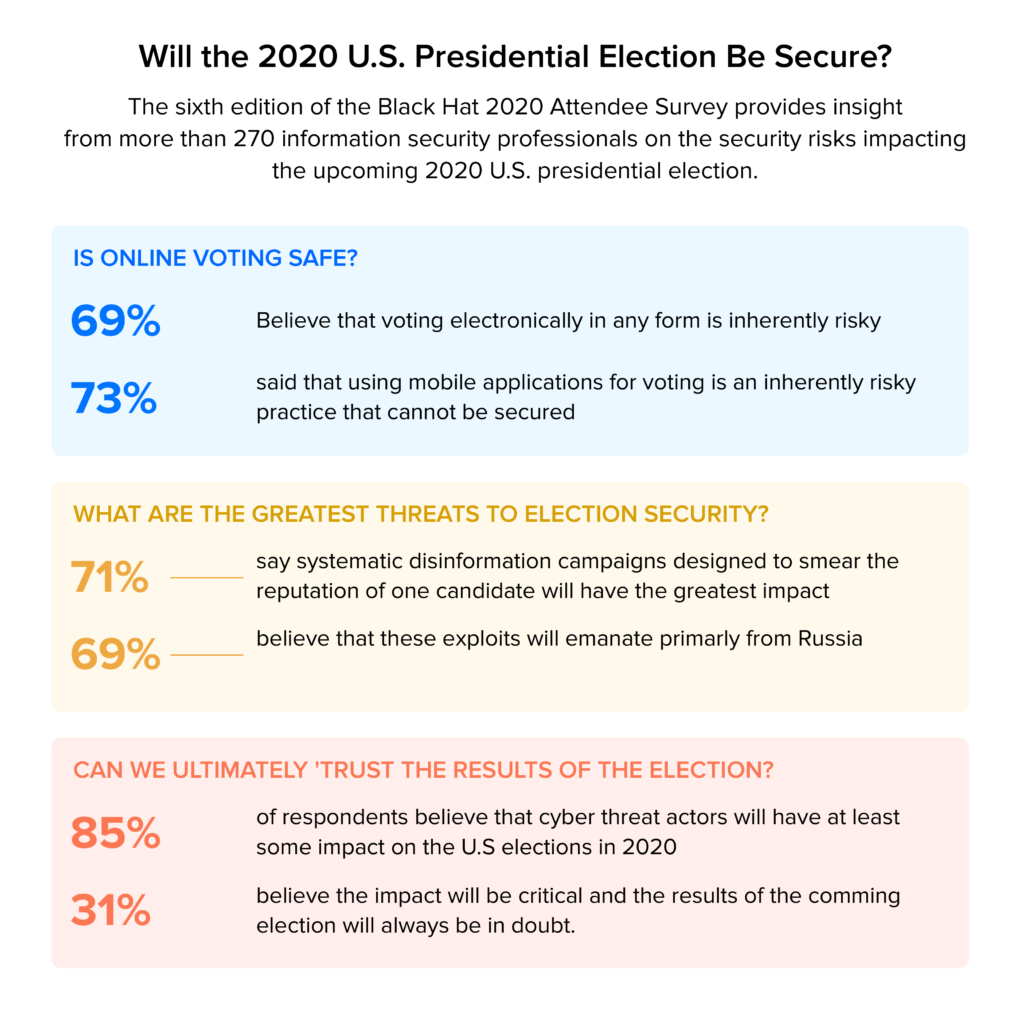 Innate characteristics of this technology have shown over the last decade that they are cutting-edge in bucking typical cyber-threats. These symbolic specs afford Blockchain an air of invincibility over paper ballots:

Many experts vouch for the role of Blockchain Technology in online voting as the architecture offers an immutable apparatus. Security and privacy are two pivotal aspects that bear the load of public expectations for online voting systems. As far as the memory goes, the Bitcoin Blockchain, which was purportedly the first globally-famed version of the tech, has never been tampered with.

The longer the node-chain gets, the harder, more resourceful (and senseless) a 51% attack gets. It is this formidable, god-like, and law-abiding image that Blockchain can attest to our elections and act as an agent of trust.

A Blockchain voting app would naturally offer transparency in terms of validating the accuracy of the trail of inputted votes. In such a blockchain-based e-voting system the entries would be time-stamped and encrypted before being secured with private keys. This might sound futuristic to baby boomers and Gen-X, yet, the truth is that the upcoming elections will be dominated by millennials and Gen-Z.

This has already been proven right in the 2018 midterm elections where the two cohorts outvoted their predecessors. Not that it needs explaining, but such generations are tech-savvy and demand a high level of sophistication from everyday devices and platforms. Blockchains, without an inkling of doubt, will not disappoint. 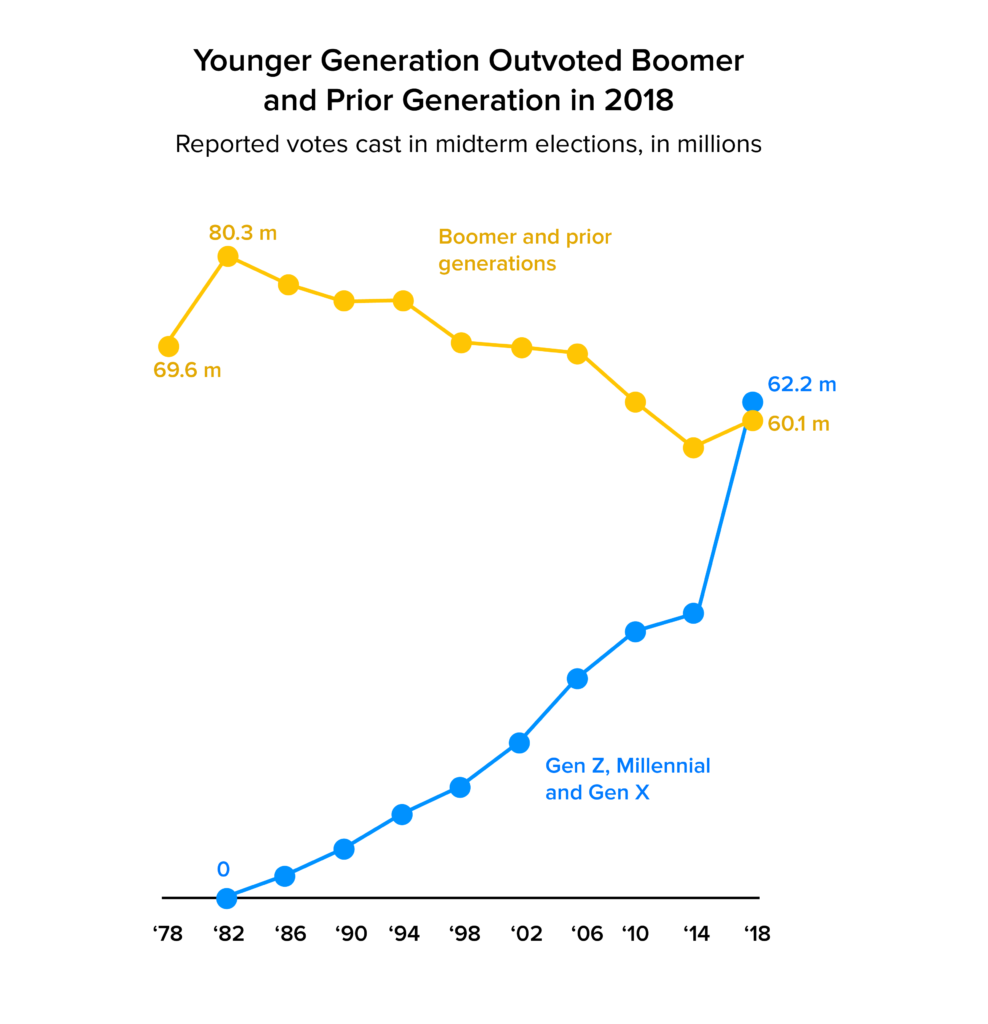 Since the nodes are distributed randomly, the dependency on a centralized authority to secure the cyberspace is automatically mitigated in a Blockchain e-voting system. Not to mention the added layers of anonymity that the peer-to-peer network augments the entire system with. Electronic voting using Blockchain could introduce familiar identification mechanisms for people, such as 2-factor authentication, to preserve the sanctity of the election. Depending upon the nature of the Blockchain, node-participation could be opened to public-players, increasing the economy of scale, and bringing down the cost to operate.

The turn-around time post the election to the result day is a lot, by the current measure of technology. Such a monumental organization of election professionals, coordinating at enormous, mind-bending scales warrants equally appreciable time. But all that could evaporate in the blink of an eye with Blockchains that, by the way, offer real-time results.

The Bitcoin Blockchain, which is slower in processing transactions, takes a minimum of 10 minutes to update and broadcast the new transactions to the network. Ethereum is still faster. Imagine hearing who the public elects as its leading representative, within minutes of concluding the final round of votes. It’s possible with Blockchain.

While most of the talk around building scalable online solutions around electronic voting has been a mere hypothesis, there are cases in point proving that governments using blockchain for electronic voting is more than sensationalist journalism.

The 2018 U.S. midterm elections weren’t just the battleground to decide the winners for 35 of the 100 seats in the United States Senate. It was also a pilot of the Voatz app which experimented, with the approval of federal agencies, to register and lodge the votes of American nationals living outside the borders.

The app phased its platform to 144 voters located in 31 international destinations and successfully charted their votes to the government. Voatz combines a plethora of technologies the frontrunner of which is Blockchain, coupled with specs of cybersecurity, malware detection, biometrics, and user identification. An independent testing lab even certified Voatz as compliant with the Federal voting system guidelines. As a Blockchain development company, we can authoritatively say that such an app can be easily engineered to the discreet needs of the country, with progressive and experienced heads working on the project.

Votem is another voting app based on Blockchain. It made the center stage being the choice-app used to cast 1.8 million votes by music lovers around the world for the 2018 inductee of Rock and Roll Hall of Fame. Interestingly enough, it did so without being hindered by cyber attacks, hacking, identity theft, or other security flaws. To date, this is the heaviest use of a blockchain-based tech intermediary for online voting.

This was apparently the first-ever demonstration of a blockchain-based app back in 2016. The Grand Old Party’s (GOP) caucus occasioned the use of this online voting app to enable 24,486 workers to impact the election outcome from 45 countries. The app review, just like the user participation was overwhelming and laid the groundwork for future projects to flourish.

Smartmatic-Cybernetica is a syndicate of European nations whose electronic voting systems have been widely used by governments. Estonia was the most prominent example of this, that employed a digitized, non-blockchain solution by the company for the 2014, 2015 elections. Voters used their state-issued IDs and/or mobile IDs to log into the internet-enabled platform and cast votes.

Even amidst a plethora of benefits and real-life applications of blockchain in voting, there are some challenges involved with the incorporation.

Blockchain Design That Solves the Challenges of Decentralized Voting System

The 2020 U.S. Presidential election has sparked a debate of whether sending ballots from home can be trusted or not. If vote duplication was ever a concern, fear can be allayed with an e-voting system using Blockchain.

In terms of accessibility as well, such an app could be cross-compatible and be accessed from PCs and mobile phones. Nevertheless, there remains a smokescreen over key questions such as who will regulate the day-to-day operations of the Blockchain and what information shall be open to the public for verifying everything.

Based on our experience that we have gathered by working with government bodies on making their voting process efficient, we’d advise you to address the following scope of work if you are considering getting a blockchain-based voting app developed:

The architecture should balance anonymity with accountability

The blocks should offer sufficient public inspection of the app alongside maintaining voter identity. The distributed ledger should act as a one-stop-shop for vote counts, something that any party, with sufficient resources, can fact-check. 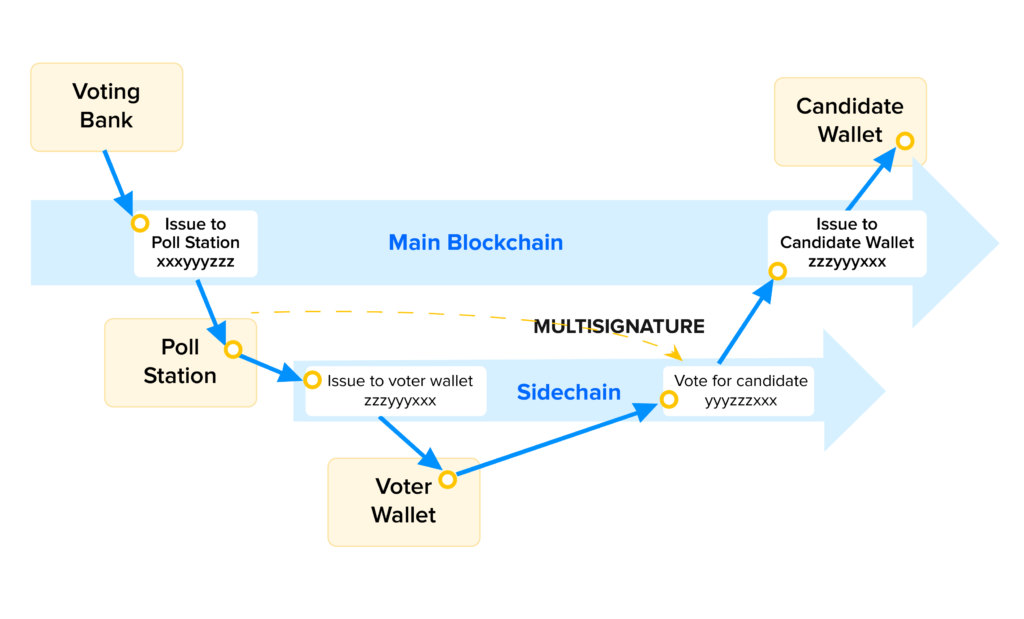 The multi-layered design could include the distributed ledger allocating tokens to a polling station. These tokens will help in keeping the exact count of total votes cast and will be further issued under the name of each voter registered at that polling station. The actual voting is recorded on a sidechain. Once the final vote has been cast, the entire record is transferred to the parent blockchain.

We can use Ethereum for this purpose and vote registrations could be effectuated with smart contracts. The federal agencies can then step in and apply a multi-signature to all votes, following which the smart contract associates the same with the actual voter. With a dedicated in-house wing offering blockchain development solutions, Appinventiv can offer you plenty of design alternatives for such Business-to-Government (B2G) segments. 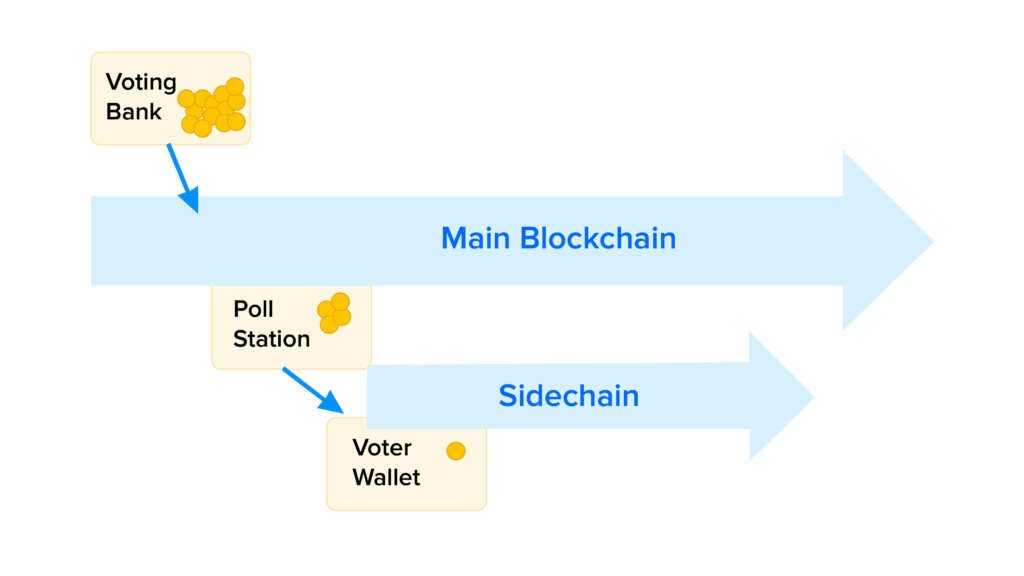 The future of voting is without a speck of doubt, electronic and digital. Blockchain definitely has the firepower to augment such systems, but unless you’re in touch with the right vendor, envisaging let alone launching such a solution would be unthinkable. There are legions of Blockchain app development services out there, and we hope you have the sight to differentiate good from great.

Rising Growth in the Use of StableCoins

Customers and society could benefit significantly from the adoption of new digital payment systems, including increased efficiency, increased competitiveness, broader financial inclusion, and more innovation. The desirability of new forms of money as a store of value and a means of payment will determine their adoption. Stablecoins, for example, are a far cry from the…

Cardano Price Prediction- Will This Crypto Asset Be As Big As Ethereum?

Leading cryptocurrencies have witnessed some volatility in price during 2021, but many of the most popular crypto coins have recently had strong positive momentum. Currently, Cardano is the hot topic with its ADA token emerging as one of the best-performing crypto assets, thanks to a rally in the larger market, as well as impending listings…