Blockchain vs DLT – An Explanatory Guide You Can’t Miss On

As blockchain is evolving, many startups and developers are exploring and dissecting the potential of the technology in all aspects. They are not solely taking interest in knowing how the technology can revamp their existing business models.

But, are also entertaining all the originating buzzwords. While some are using them as synonyms, others are taking an interest in finding the differences between them.

One such newly originated name is Distributed Ledger Technology (DLT).

‘What is DLT’ has become one of the buzz questions of the current time, with what makes it similar/different from Blockchain being the close second

Let’s cover both in this article. But first, let’s have a sneak peek of Blockchain by considering a platform example of both, i.e, Ethereum (Blockchain) and R3 Corda (DLT). 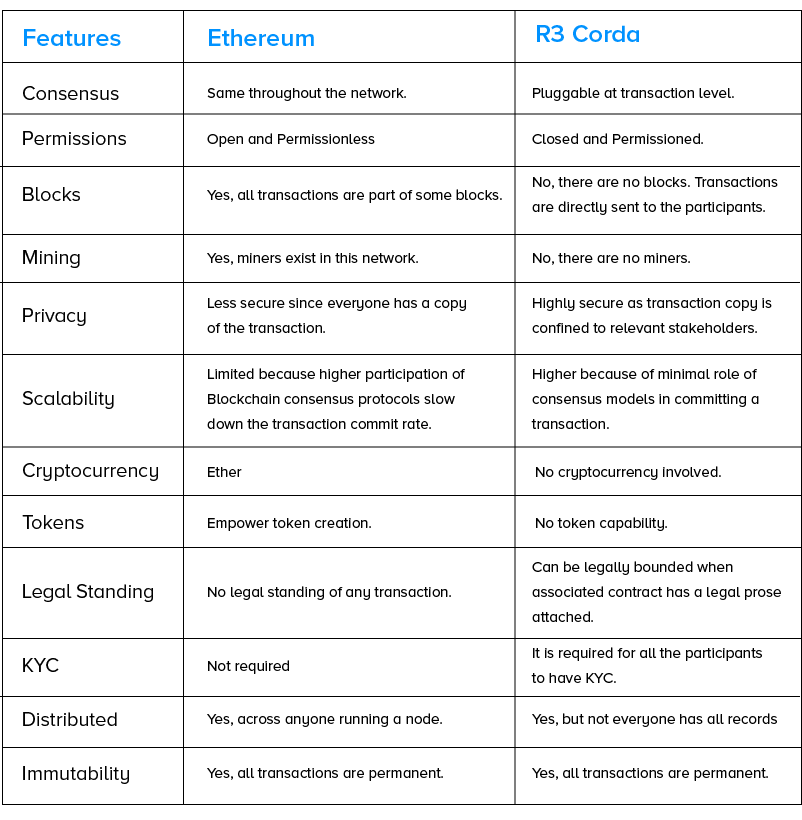 Now while this would have given you some insights on the difference between blockchain and distributed ledger, let’s jump into the decentralized world and study them in detail – starting with the basics of Blockchain technology.

A Simple Definition to Blockchain Technology

Blockchain is a decentralized, distributed and often public database type where data is saved in blocks, such that the hashcode present in any block is created using the data of the previous block. These blocks offer a complete set of characteristics like transparency, immutability, and scalability that makes every brand and developer interested in investing their time and effort into Blockchain development guide.

The technology came into limelight as backend support force for cryptocurrencies, but soon made its place in different business verticals including Healthcare, Travel, Real Estate, Retail, Finance, and On-demand. A complete information about different industries that Blockchain is disrupting can be taken from this image:- 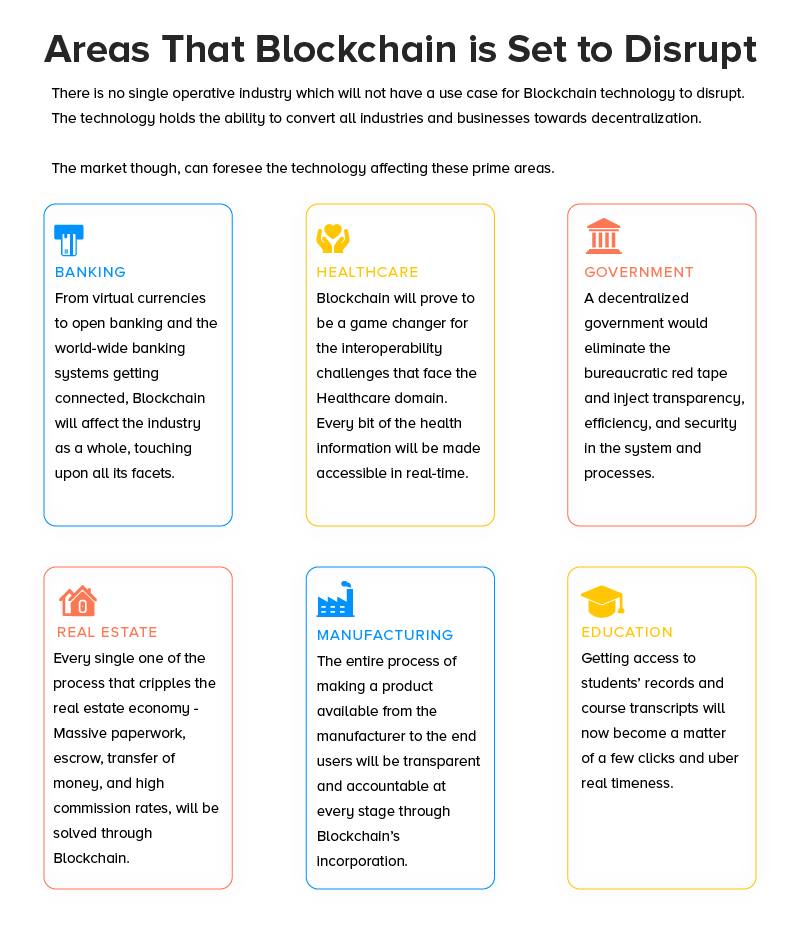 With this attended to, let’s turn towards DLT.

A Brief Introduction to DLT

The answer to what is DLT technology and how distributed ledger technology works is that it is a digital system used for storing the transaction of assets, even when the data is stored at multiple places simultaneously. It might sound like a traditional database, but is different because of the fact that there is no centralized storage place or administration functionality. Meaning, every node of the ledger processes and validates every item, and this way, contributes to generating a record of each item and building a consensus on each item’s veracity.

The concept is attracting almost every app development company due to the number of advantages of distributed ledger technology.

Now, as we have looked into what the two terms mean, let’s look into the DLT and Blockchain relationship before turning towards the comparison of two.

Relation Between Blockchain and DLT 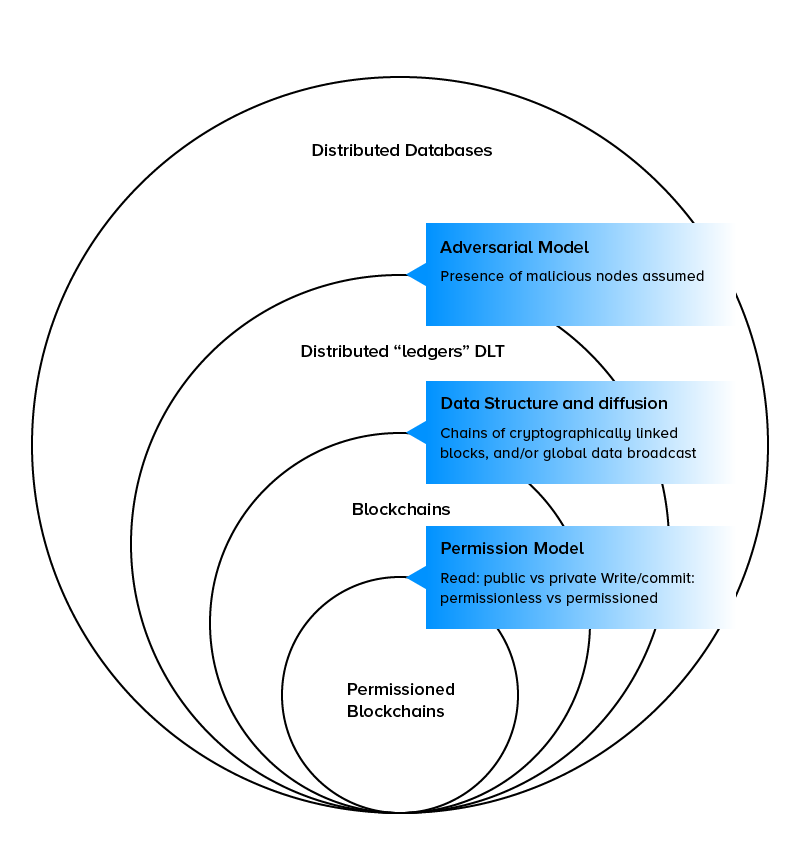 As depicted in the above image, Blockchain is just a piece of the vast ecosystem of DLT. It is a type of DLT where records are stored in blocks after being validated cryptographically. That implies, a hash created using the data stored in a block is fed in the next block added such that it gives an impression of a chain.

Now, let’s move on to the core part of this article – DLT vs Blockchain comparison.

Factors to Consider While Comparing Blockchain and DLT

The foremost factor to focus upon while checking into DLT vs Blockchain is the consensus mechanism.

Another factor that you must keep a watch on while comparing DLT technology vs blockchain is block structure.

While blocks are added in the form of a chain in a Blockchain, they can be organized in different forms in the case of DLT.

While tokens are a must to consider while working with Blockchain technology, they are not required when dealing with DLT. And the reason behind is that only invited (limited) nodes are allowed to participate and validate any transaction in the DLT environment which reduces the size of the complete ecosystem.

However, you might be requiring tokens when you wish to perform block spamming or work on an anti-spamming detection process.

In the Blockchain environment, all the blocks are arranged in a particular sequence, i.e, in a serial mode. However, there is no such constraint when talking about DLT. Blocks are organized in different ways in the case of DLTs.

A DLT can complete a significantly higher number of transactions in a minute than what is possible by Blockchains. So, it delivers higher efficiency with minimal cost than Blockchain-based solutions.

An outcome of this is that today, various Blockchain development companies are looking ahead to enter into the DLT ecosystem.

Another factor that you can consider to see the difference between Blockchain and distributed ledger is Trustability.

In the case of DLT, trust among participating nodes is high. And it is even higher when the corporate initiates building their own internal blockchain or organizing a consortium. Also, the censorship resistance in this template is low since they can be centralized and/or private.

However, it is not so in the case of Blockchain.

In the Blockchain ecosystem, the censorship resistance is too high with one vote per PC. But, with the progressive concentration of mining with upgraded hash power in the hands of fewer decision makers, the chances of trustability is low.

To access data stored in a blockchain, users have to employ a key. If they lose the key, they would lose access to their account and funds. A real-life example of which is the loss of access to nearly $145M of bitcoins and digital assets on the death of a cryptocurrency exchange CEO.

However, such situations are not majorly possible in the case of DLT, since the data is distributed, encrypted, and synchronized across multiple ports.

When talking about the comparison of blockchain and DLT in terms of real-life implementations, blockchain leads the battle.

This is so because many entrepreneurs are slowly and gradually understanding the nature of Blockchain via some guide and use them into their traditional model for leveraging better advantages. In fact, various recognized brands like Amazon, IBM, Oracle, and Alibaba have started offering Blockchain As a Service (BaaS) solutions.

But, when it comes to Distributed Ledger technology, DLT enthusiasts and application developers have begun to explore the core of the technology. They are looking ahead to come across different use cases of DLT, but there are not many significant real-life implementations yet.

Now that we have done a detailed comparison between Blockchain and DLT, let’s learn about other types of DLT besides DLT Blockchain technology.

Here are the popular types of distributed ledger technology:

Holochain, in simplified terms, is a type of DLT which does not rely upon consensus models or on the concept of tokenization.

Here, each participating node has its own secure ledger and can act independently, while also interacting with other devices on the network to meet the basic needs of decentralization.  This way, it lets you build more customized and scalable solutions than what Blockchain offers.

Learn more about Holochain by checking out this video:-

Another form of DLT that exists in the market is Hashgraph. It is basically a patented algorithm that has the potential of delivering all the benefits of Blockchain (decentralization, security, and distribution), but without compromising at transaction speed rate. Something for which it relies upon the concept of Gossip about Gossip protocol and Virtual voting technique.

One real-life implementation of Hashgraph that has proven to hold the potential of becoming a replacement of Blockchain is Hedera Hashgraph, about which you can learn more in this blog.

Direct Acyclic Graphs (DAGs) or you can say Tangle is also one of the prime types of DLT that pertains in the tech world.

Under this concept, multiple chains of nodes are created and managed at the same time and are interconnected to one another. They, unlike Blockchain, exist both in serial and parallel form.

One of the prime crypto projects that operates on this type of distributed ledger technology is IOTA Blockchain.

Q. Is DLT the same as Blockchain?

No. It’s true that Blockchain is a type of Distributed Ledger database, but the two are not the same.

Q. Why are DLT and Blockchain terms used interchangeably?

All the Blockchain are a type of DLT. However, the converse is not true. Since most people are unfamiliar with this fact, they often use the two terms as synonyms.

Many people are living with the notion that Blockchain and Distributed ledger are the same thing. However, the two are different and even have different potential – having a knowledge of which can make a difference in the future. So, it is necessary for anyone to look into distributed ledger technology vs Blockchain vs DLT and know which one to pick for better opportunities in the future.

So this was all about what you should know when looking into distributed ledger technology vs Blockchain vs DLT. But, in case you have some more queries or are confused about which one to invest in, feel free to connect with a reputed blockchain app development company. They will guide you through the entire process and offer top-notch blockchain development services.

How to Implement Blockchain into your Business

Blockchain Technology was mainly created for catering to the digital currency trade. However, the tech-savvy world soon realized that blockchain technology can be utilized in empowering businesses. Blockchain implementation has the potential to bring more efficiency, trust, and transparency into day-to-day transactions. As a result of this, industry leaders are now planning pivotal projects for…

How Does DeFi Lending Work?

The rise of DeFi has strengthened the prospects of blockchain implementation in the development of financial apps. DeFi or decentralized finance, has recently gained prominent attention as it has garnered massive amounts of capital for various businesses. You will be surprised to know that almost $20.46 billion is locked in DeFi protocols, proving that the…

DeFi vs CeFi: Comparing the features and differences

Bitcoin and other digital currencies have created an entire ecosystem around blockchain. So much so that the world has started arguing that decentralized solutions are going to replace traditional financial services in the time to come. Whether or not it will happen is something that only the future will tell, but what we are seeing…