How to Develop Apps for Foldable Smartphones

2019 was the landmark year where the talks of foldable smartphones reached a zenith state.

The news of Samsung preparing to launch its innovative foldable offering had already been doing the rounds for several years. But in 2019, with Google announcing its partnership with Samsung on this innovation, the rumours became a reality and a number of device manufacturers soon started doing the homework to enter the space.

This enthusiasm of device manufacturers took very less time to ripple down to the app development economy, which started doing homework of their own: Preparing for the design and technical nitty-gritty needed to deliver a minimal learning curve, impeccable experience to the users in a brand new environment.

Before we head on to the parts where we look into the intricacies of app development for foldable phones and what you can do to prepare your mobile app for foldable smartphones, let us look into its current state.

The State of Foldable Smartphones 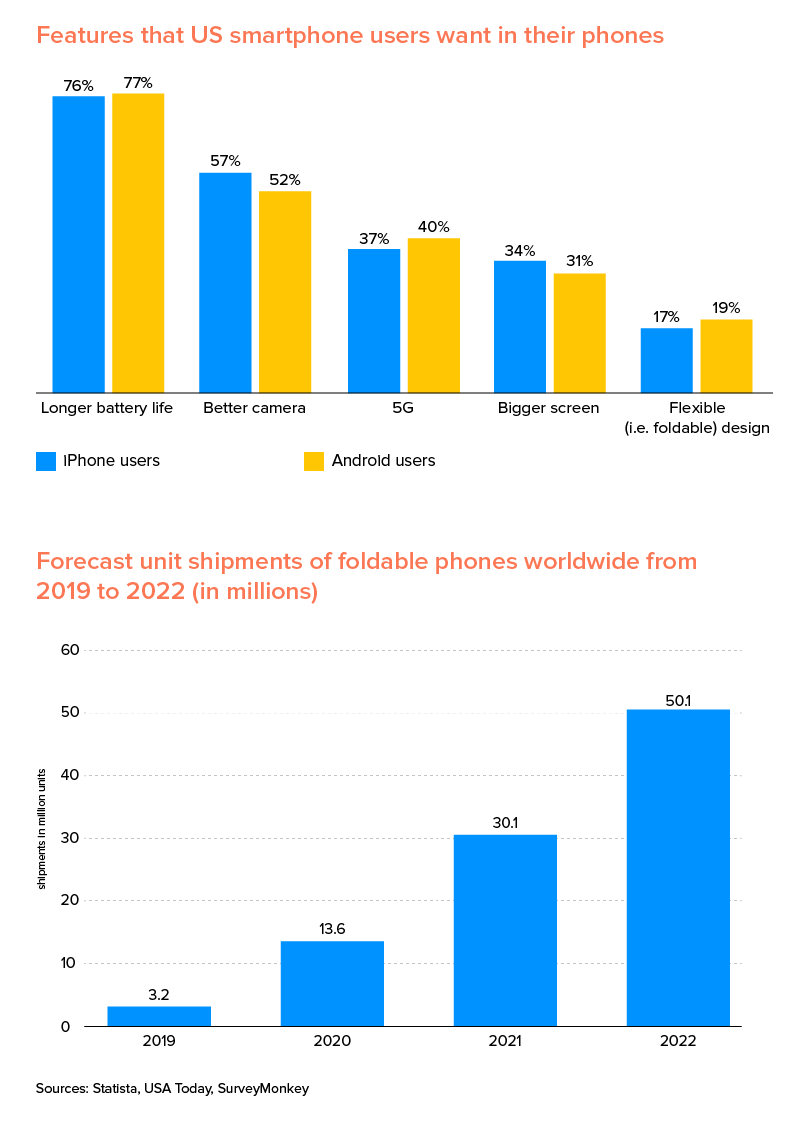 The numbers that the statistics mentioned above presents highlight that once the foldable phones start flooding in the market, they will not become an instant hit. It will take some time for them to create a position in the smartphone sector. But, like every technological disruption, while the wave may be slow, it will grow massive in no time.

This, in turn would need both device manufacturers and Android app development companies to prepare in advance.

How Would Foldable Phones Impact the App Development Process?

While on the surface level it appears that it is only about having flexible UX in mobile apps, but the impact is a lot more massive.

Foldable phones means more space for the developers to create immersive and detailed experiences for all the different types of multi-window.

Let us look into the different ways foldable smartphones can have an impact on the application development process.

A.  Quality Supersedes Everything

Foldable phones will come with multiple orientations, aspect ratios but what will remain the same is the quality expectations. The users will expect you to deliver them the same flawless and glitch free quality and app flow that they are used to.

Considering this, the onus of providing high quality digital products will increase when you venture into the app development for foldable phones space.

With a massive number of foldable phones soon to hit the smartphone market, the app development team will have to work around a great number of test cases – all at the back of the complications that come attached with multi-window app configuration. 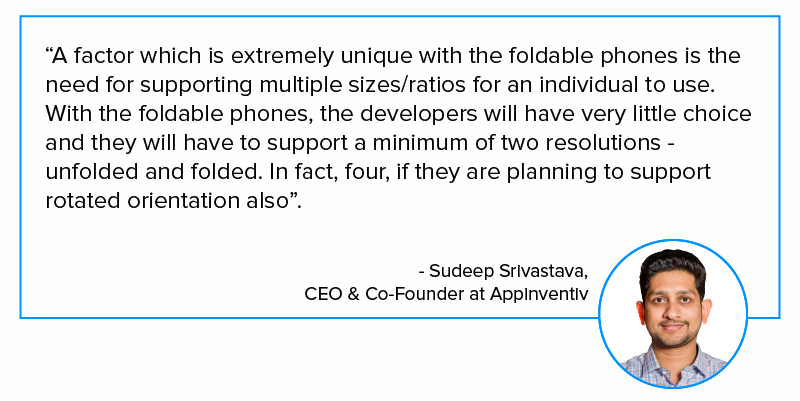 An effect of building apps for foldable phones is an extended feedback collection process. Since you will be taking a traditional application to a new space, there will be a lot of feedback coming your way especially on the transition front.

Noting this, it would be necessary that you add room for attending to the changes in your Agile scrum process.

Optimizing apps for foldables ensuring that it works glitch free in all the different modes will require a lot of design, development, and testing efforts, that in turn will bring in a price hike.

How to Develop Apps for Foldable Phones?

Like every mobile app development process, let us divide the process of creating apps for multiple screens in three ways too.

There are primarily four things that you will have to put into consideration when initiating app design for foldables.

A. Two States – There are two states in every foldable smartphone – unfolded and folded screens, aka main display and cover display.

Unfolded state: this is the place where a phone transforms into a tablet, giving space to the companies for enriching experience. This extra space can be used for giving greater context and adding secondary actions or experiences to the apps.

Folded state: in this foldable app design state, the phone looks like your traditional smartphone, which is operated using one hand.

B.  One or Two-Handed App Design

States change the whole experience – even the one of how the device is held. Presently, people operate smart phones with one hand, but in the unfolded state, they will have to use both their hands. This will change the design dynamics in a way that the important UI and UX elements will have to be kept within the thumb and other fingers’ area.

Because the real estate in case of foldable smartphones is much greater, multitasking should always be considered. Meaning, as designers, you will have to prepare for the time where another application with its own set of design and functionality will be sharing the screen with your app and look into your multi-window life cycle as well.

The user experience must seamlessly move from the folded to the unfolded state and then back to the folded state. There should be minimal to zero change happening in the layout, which would increase the app flow ambiguity.

Like in the case of designing, the developers’ work will also be segregated into four parts of app development for foldable phones processes. While with Android 11, Google will be extending support to foldables, for now, let us look into all of them in detail.

As mentioned in the last section, app screen continuity means that when an app runs on a foldable smartphone should transition from an screen state to another automatically and seamlessly. The app must always resume in the same location and state.

What you’ll have to do is make resizable app through dynamic resizing. It is done by setting resizeableActivity=true. It offers maximum compatibility with whatever environments and factors your application encounters.

In case you forget this step, the system might automatically resize your app without the guarantee of the right size, configuration and aspect ratio. Like shown below. 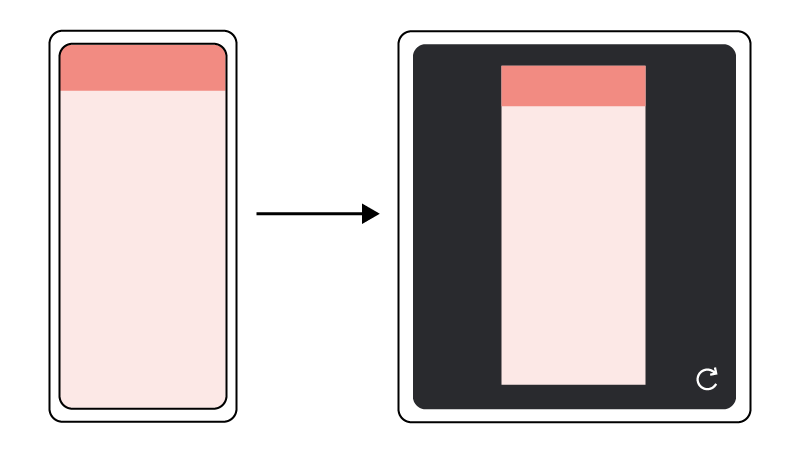 Android 10 and higher would support a wide range of aspect ratios. In foldables, the form factors would vary from a super high long and thin screen to 1:1 ratio. For being compatible with the devices, you must test the apps for as many screen ratios as possible. 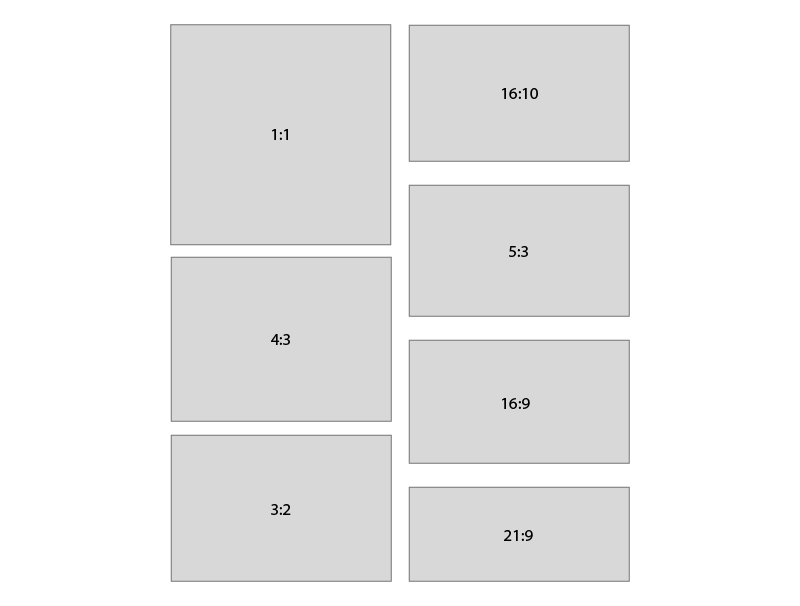 If you are not able to support a few of these ratios, you must use the maxAspectRatio and minAspectRatio for indicating the high and low ratios that the app can handle.

Having two apps run side-by-side has been made common by Google since some time. What the foldable technology introduces is that it allows three or even more apps to run at the same time. Moreover, the technology gives them the capability to share content with each other.

In order to opt-in the multi-resume feature, following manifest meta-data has to be added –

The tenth OS version and higher supports multi screen Android display. If an app is running on a device with multiple displays, the users can easily move them from one display to another. These multi-resume applies to the multi-screen scenarios also.

An app is able to specify which display must run when it is launched, or when another activity is created. The behavior is dependent on activity launch mode which is defined in manifest file, and in the intent flags and the options set by people who launch the activity.

An activity must check the present display in onCreate and onConfigurationChanged when handled. Android app developers must update the layouts and resources when there is a change in displays.

Additionally, there are these things that a developer must take care of –

When it comes to testing the application, the Android QA team will have to ensure that the app reacts to the – Multi-window and multi-resume functionality, Resizing & new screen ratios, and Configuration changes.

How Can Appinventiv Help?

We are known in the industry for being that app development company which offers disruptive offerings and for our work with technologies that are yet to go mainstream in the mobile domain. Whether it is the incorporation of Blockchain in apps or introducing gesture mechanism in IoT, we are on top of technological innovations.

Since the early 2019s when the talks around foldable phones started, our in-house Android app developers gathered the knowledge around Samsung’s Emulator APK and AOSP Foldable Emulator Android Studio 3.5 to gather what we would need to achieve once the foldable smartphones went mainstream.

At the time of writing this article, our Innovation Lab has experimented on multiple test cases to gather an understanding of how the application is appearing in the folded and unfolded state. The lab has gotten us on the front of app development for foldable phones. All in all, we are prepared to convert your traditional app into a foldable device app.