5G and IoT: Emerging Technologies With Endless Use Cases

Dive deep into your imagination and seek a world where smart homes can unlock doors just by scanning your face, automatically adjust lighting and temperature, a world where chronic diseases are managed 24-7 and where accidents are a thing of the past. You can imagine that the fifth generation of wireless technology promises more than just a fast network.

It will not only help you redefine the network but also establish a new global wireless standard for speed. A 5G network builds a bridge to the future. This technology is not just a new generation of wireless technology, it is a 5G foundation to release the full potential of IoT thus revolutionizing technological growth. We are well aware about IoT and its working.

IoT is described as an ecosystem of interrelated computer devices, digital machines, and objects that have the ability to communicate and transfer data to each other in real-time, with minimum human intervention.

Major components of IoT include – devices, connectivity, data processing and user interface. Since IoT is already in the blooming stage, with the help of 5G (fifth generation), it has the potential to reach a whole new level. 5G and IoT technology together have a wide spectrum that increases the overall bandwidth and allows a massive amount of IoT devices to connect.

IoT and 5G have given rise to the mobile ecosystem by introducing a powerful combination of extraordinary speed, expanded bandwidth, low latency, and increased power efficiency that will be connecting billions of networks in the coming five years and is changing our world. Let’s look into some numbers to show you what 5G enabled IoT is capable of. 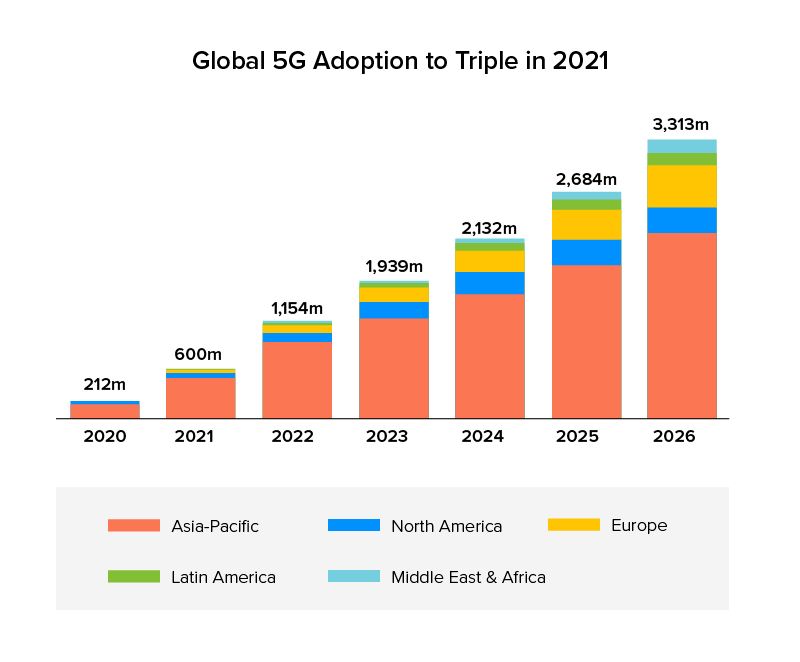 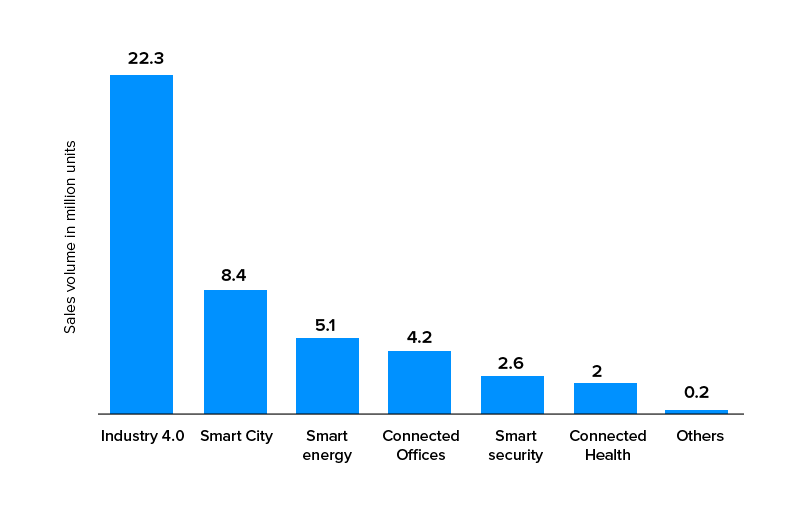 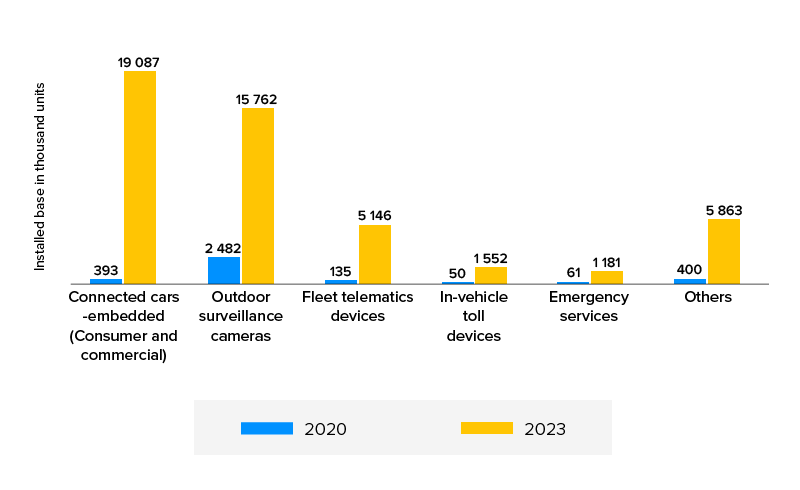 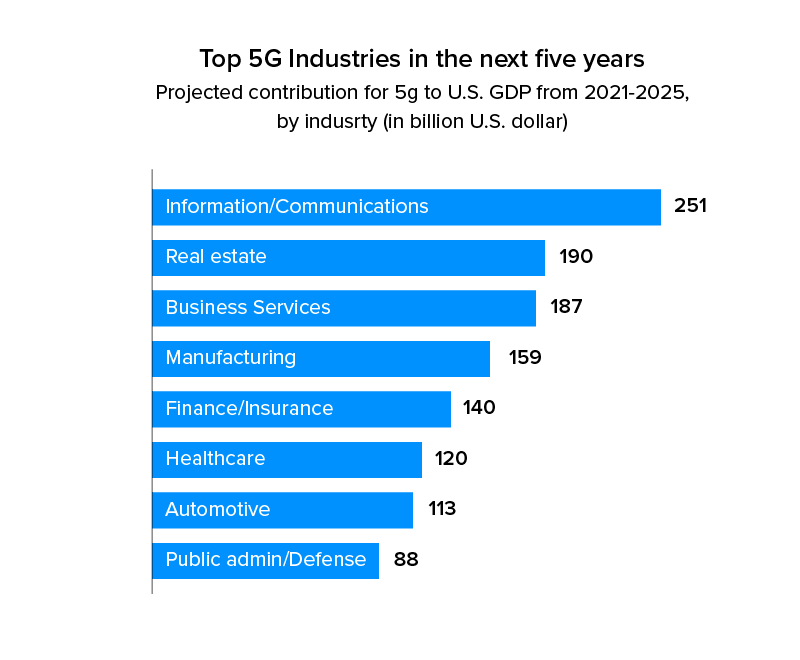 Now that we are aware about what IoT in 5G technologies can pull off. Let us look into the advantages IoT and 5G bring to the table in detail.

What Are The Advantages Of 5G And IoT Tech?

Speed in transmissions can reach 15 to 20 Gbps. With the help of the new found speed we can access data, files, programs etc on remote applications. By intensifying the usage of the cloud and making all devices (mobile phones, computers, etc.) depend less on the internal memory of the device, it won’t be necessary to install numerous processors on a device because computing can be done on the Cloud.

5G impact on IoT is clearly the increased number of devices that can be connected to the network. All connected devices are able to communicate with each other in real-time and exchange information.

In simple words, latency is the time that passes between the order given to your smart device till the action occurs. Thanks to 5G this time will be ten times less than what it was in 4G.

For example: Due to lower latency the use of sensors can be increased in industrial plants. Be it control of machinery, control over logistics or remote transport all is now possible. Thanks to lower latency, which has led healthcare professionals to intervene in surgical operations from remote areas with the help of precision instrumentation that can be managed remotely.

5G implements virtual networks and creates subnets such that the network connection is adjusted as per the specific requirements. By creating subnetworks, some specific characteristics are given to a part of the network. The programmable network will prioritize connections, in case of emergencies by allocating different latencies in the connection.

You are now familiar with the advancements and advantages that applications of IoT in 5G can offer. So, let’s discuss how this wave of new technology is coming up with an endless number of use cases.

A world where accidents are minimal, would be a great world to live in. 5G IoT applications can enable the sharing of real-time information about traffic and road conditions among cars and other road users. Such smart mobility and driver assistance services require 5G communication devices in vehicles, with pedestrians, etc and roadside sensors infrastructure.

By collecting and analysing real-time traffic data from the roadside infrastructure and the vehicles on the road, such Intelligent Transportation Systems would be able to timely warn drivers about hazardous road conditions, traffic blocks and safety  compromising situations. As a result road safety and traffic efficiency will increase. 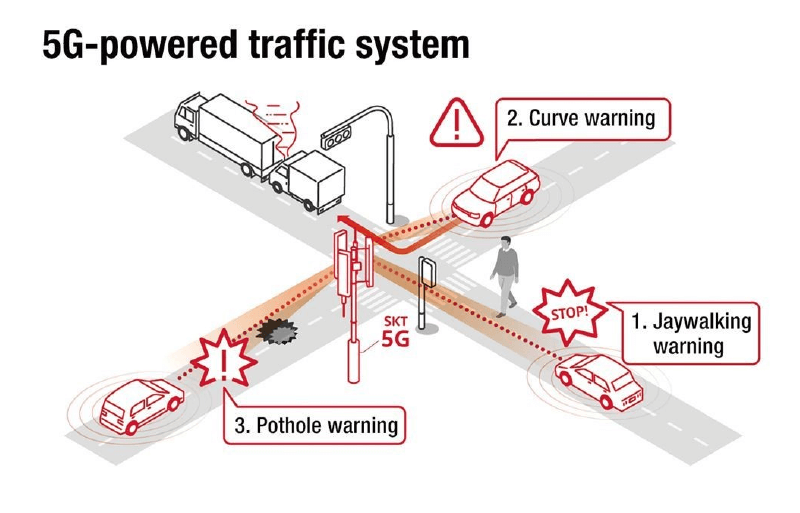 Demand for electricity is increasing as we speak. Virtual power plants and smart grids are the technological solutions for the same. 5G allows us to inculcate real-time management and automate the smart electricity grid. The maintenance can be optimized once we start detecting faults and providing solutions rapidly.

5G is being largely adopted because of the increased deployment rate and lower cost in comparison to wired alternatives. As a result, utility operators are progressively updating their grids with new sensors, control systems and integrating renewable energy resources.

Another 5G based IoT application that is assumed to thrive is video surveillance. Due to the recent turn of events around the globe, the government is ready to invest in public surveillance and security systems. As of now, video surveillance systems rely on wired connectivity, but the adoption of wireless networks can result in fast set-ups and lower costs, boosting connectivity and performance as compared to the wired ones.

5G and IoT security solutions allow us to prevent the loss of critical assets.

The European Commission defines a smart city as “a place where traditional networks and services are made more efficient with the use of digital and telecommunication technologies for the benefit of its inhabitants and business”.

Smart cities use the5G and IoT devices to collect real-time data to understand demand patterns and respond with faster and lower-cost solutions. You can also call it a digital city whose ecosystem is designed to run by connecting several dedicated networks of mobile devices, sensors, connected cars, home appliances, communication gateways and data centers.

We already know that more than 50 billion devices will be connected to IoT by 2030. 5G is expected to unlock the potential of IoT and be a driving force for the smart city by addressing and overcoming all connectivity issues.

People will no longer need to spend hours travelling from place to place for study, remote working, business meetings or breathing in toxic air. With the help of VoIP’s revolutionary new system, children will be able to learn at their own pace and feel less pressure from
academically rigorous standards set by traditional education plan makers. Now you can explore what has never been possible before with VoIP technology.

Each year technology is innovating itself with new discoveries and ideas. IoT – the concept which did not even exist a decade ago has today not just gotten mainstream but has also marked a presence, across industries, across the globe.  Looking at the above emerging technology of 5G and IoT and it’s numerous use cases now is the time to dive deep into mobile IoT app solutions and contact an IoT application development company.

For that you need to find a trustworthy and reliable IoT app development company in USA or other countries where you belong to partner with. A company that would help you expand your decentralized journey. Here comes Appinventiv to help you out by providing top-notch solutions for your business needs. For any queries you can contact us through the link provided.