Technology colossuses such as Google and Microsoft have been paving the way for progressive web applications (or PWAs) since 4-5 years back. Now, PWA has become a must-have technology for large companies and small startups. Twitter, Starbucks, Google and AliExpress use react progressive web app builders to enhance their online image.

PWA is a web application that captures the advantages of native and web apps. It provides hardware functions and is enclosed in the main body of cross- platform applications. Compared with native applications, it is quicker, simpler and less expensive to create and maintain.

PWA supports functions that are not accessible for normal sites. It incorporates offline work, push notifications, access to geographic location, camera, microphone, etc. PWA can even work outside the browser, utilizing a local application shell that can be dispatched at startup.

Since you have known the importance of PWA. There are several ways to create a react app PWA or progressive web applications. You can use vanilla JS, HTML, and CSS with ease and choose your framework and libraries. Some popular choices are Ionic, Vue, Angular, Polymer, and of course, React.

How To Build React App?

To start with how to build a web app, first make sure you have the recent version of Node and a familiar code editor installed. Mostly Visual Studio Code is used by many as a popular choice.

But, on the off chance that you have a react web application that you need to bind up with progressive features then it’s amazing. If not, then make sure to install to get the full benefit of React native app development. Facebook’s CreateReactApp tool can help with this. You can even import ready-made response applications from GitHub. 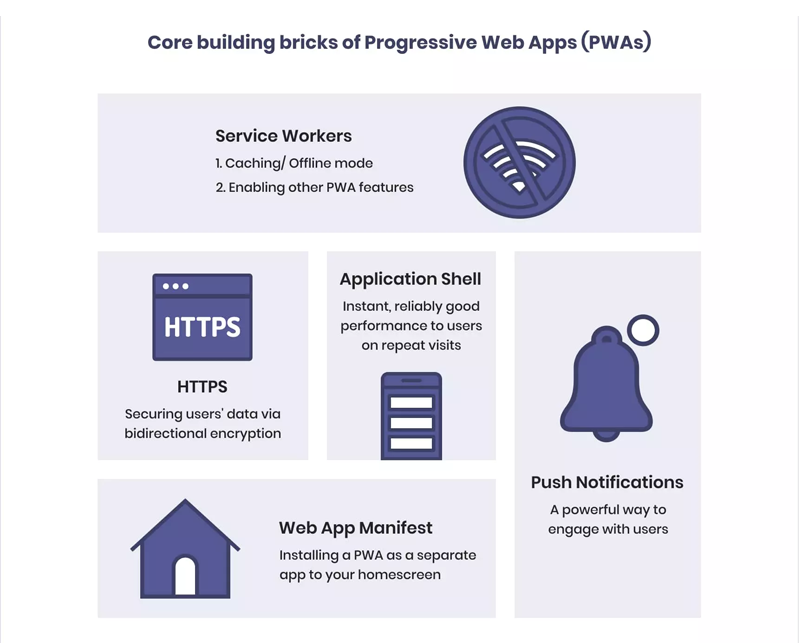 Building A PWA With Create-React-App

Set Up A Simple React App

The first step is to build PWA. For that you need to use create-react-app as discussed in the above para. If you don’t have it installed in your system, then you can run this command using the below code:

To build a TypeScript React app using create-react-app, enter npx command given below:

These steps will  create a React web app built for you with TypeScript, that can be tested locally with:

Another method to create a React app is with:

The below given image shows you the files that will be built in the react-app folder. 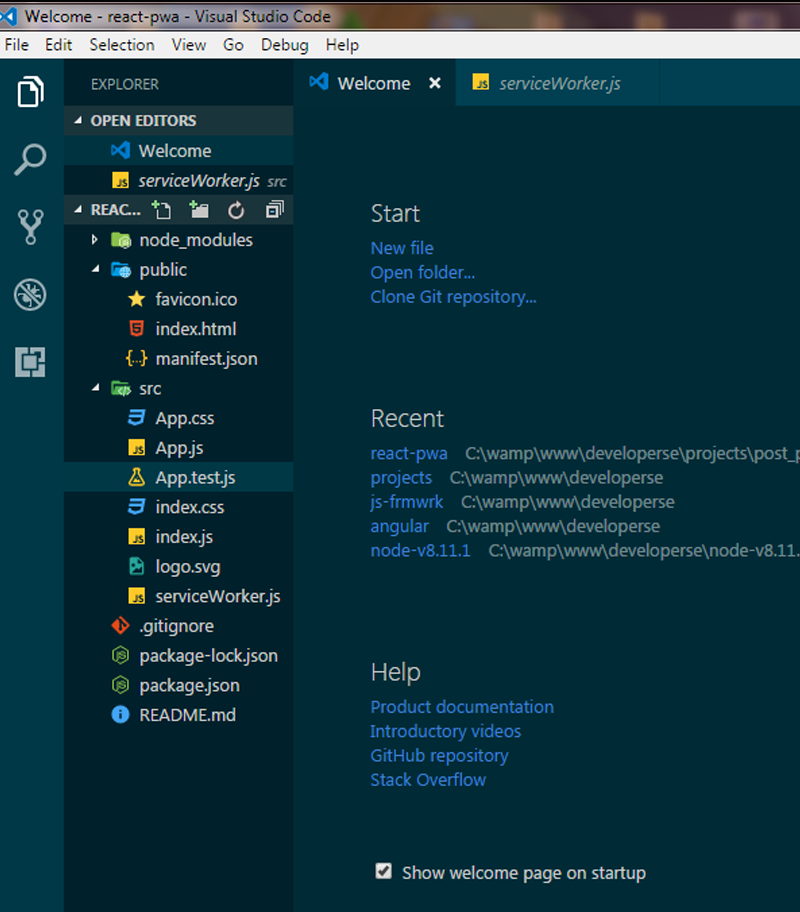 Create-react-app (CRA) offers the tools for providing solutions to the question- how to create a PWA apps with React for your business?

But if you are thinking of how to build a progressive web app runnable in the offline mode? Then you have to configure the auto-generated service worker file.

The directory of newly created project contains the file index.js. When you open it, you will find the code given below:

In the file you may see the service Worker, which is not registered. To register it, you have to change the unregister() call to register() one.

Thus, the question of how to create a react app or create a PWA app with a service worker using React is solved?

You should know that manifest.js in the public folder bears the metadata aka information that controls how the app occurs to the user and explains its appearance at launch. 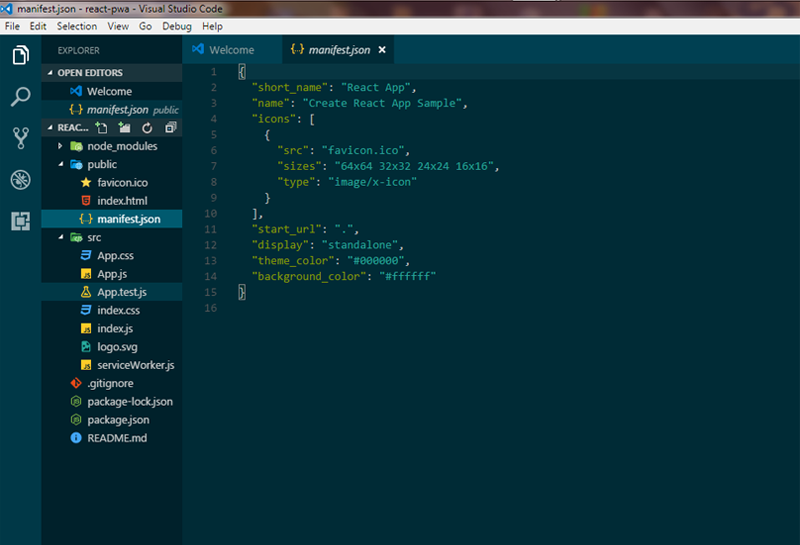 The manifest.json is linked in the public/index.html file:

Note: The use of %PUBLIC_URL% in the tags above. It will exchange with the URL of the public folder during the development. Also note that only the files which are inside the public folder can be taken from HTML.

Having a manifest.json is required by Chrome to add your PWA to the Home screen.

The serviceWorker.js registers our service worker file. To answer your question where the worker file will be registering? The file will be generated with CRA when the app is built, i.e. when are building for production:

Explaining the component of the file, here we go:

After making a React PWA. The next step is related to testing the app.

To run the app in the production mode, type the following commands given in the figure below:

Now you have built your application, and it’s time to test it. Google has created a checklist on PWA, and you can assess your web app using Lighthouse. It is a tool located in the namely tab of Chrome DevTools.

React being an open-source library for JavaScript initially made by Jordan Walke from Facebook in 2013, it was built for developing UIs in a quick, basic, and adaptable way. The Facebook group keeps up with the library, and presently it is executed in their items like Facebook and Instagram.

React is popular with the quantity of JavaScript downloads hitting the place of 8+ million downloads each week. One of the many reasons people are going for react native application development.

Developing PWA React for startups is in trend as it empowers design, develop, convey, and publish PWAs for billions of devices utilizing technologies they’re acquainted with. Existing React applications can likewise be changed to a PWA.

PWAs with the help of pwa app development company are easy to create and distribute, and increase the value of clients by giving local insight, better commitment by means of components, for example, add to homescreen, pop-up messages and more with no establishment interaction.

Today the Internet isn't split between mobile and desktop. With the advent of smartphones, growing numbers of users began browsing the web on mobile devices. Mobile apps soon surpassed websites when it came to digital media usage. Businesses started shifting their focus from websites to apps, as applications allow them to offer more content and…