Keeping up with the expectations, Google announced its much awaited newest Android operating system in I/O 2018.

The news of a new operating system coming out had been doing rounds for a few months, keeping the developers on the edge of their seats waiting for the developer review. And the new OS has finally made its appearance in I/O 2018.

While the Android P name has not been revealed yet, the Android P developer preview that Google has launched in I/O 2018 is enough to pique the developers and businesses’ interest.

Android P Beta is hands down the one announcement that would have a direct impact on the world of Android app development companies like ours, which aim to be on top of all the new technologies.

The features that Android P 9.0 has been launched with, even though the Android P name is not revealed yet, will have a direct impact on the apps that will be developed to enter the era of technological revolution. Utilized right, Android P features will help businesses see a surge in their revenue charts.

In many ways, Android P is just the biggest tech revolution announcement that Google has made after the release of Flutter Beta 3, making its cross platform SDK much powerful.

Talking of big Announcements, Apple has also launched the nemesis of Android P – iOS 12. Here is the comparison between both the giant OS versions.

Since we are already on the track of bragging about Android P and its ability to transform the ordinary Android app outlook, it is time to take a deep dive into the features that Android P Beta has been launched with and how they can be implemented by businesses to expand further. Here we go –

Android P Features and the Businesses They Would Benefit

Using this feature, users having the Android P 9.0 can move from point A to point B inside a building. With this, the days of getting lost inside a shopping mall would be long gone.

If you are a retail outlet inside a mall or even an airport, your customers will now reach you much easily.

If yours is an app for a chain of or specific educational institute, hospital, or hotel, with the Android P indoor tracking feature, you are now all set to change the onboarding experience of these industries.

For the users who tend to lose time with phone in their hand, Android P Dashboard and App Timer features come as a saviour. 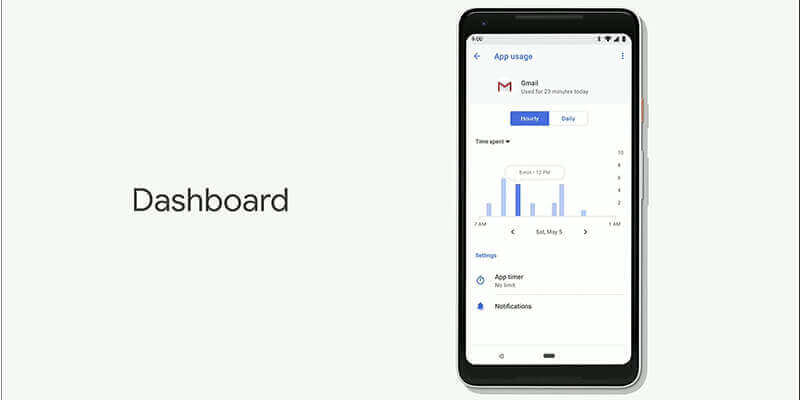 App Timer, on the other hand, helps manage your time better by setting a time limit on the mobile apps that you use. Once you reach the time limit, a notification pops up saying that you need to pause the action.

While all the other planned features mentioned in the piece was launched when Android P made an appearance on devices in October, Dashboard was seen to be missing. However, on 25th November, Google finally released the Dashboard functionality on the Android devices.

Lying under the Settings Option by the name of ‘Digital Wellbeing’, the functionality now give the users a detailed insight into how they are using their phone. According to Google, “the option has an App Timer that lets you set time limits on apps and grays out the icon on your home screen when the time is up; the new Do Not Disturb, which silences all the visual interruptions that pop up on your screen; and Wind Down, which switches on Night Light and Do Not Disturb and fades the screen to grayscale before bedtime.”

Both of these features are aimed at bettering the users’ focus and productivity. The two factors that are the prime aim of Enterprise and Parental Control Apps.

If your business belongs to any of these two categories, Android P Dashboard and App timer will help you create a platform that in turn help your user become more productive.

One of the best Android P features, Slices allows users access a functionality of an app outside the app. Suppose you type in Uber in Android P Google Search, an interactive pop-up a.k.a Slice would come up with the option to quickly book a cab to your favorite place, eliminating the need to leave your action and opening the Uber app. 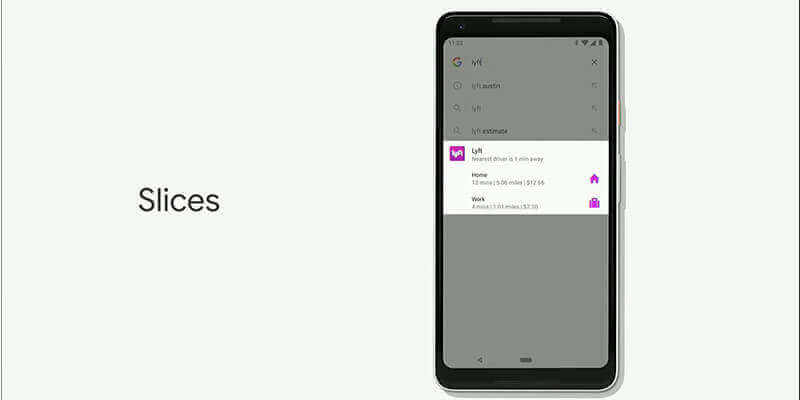 All apps that have the provision of quick in and out actions would benefit with the Slices feature. It will be advantageous to businesses across different industries

On the messaging front, two new features have been introduced in Android P – The ability to view image straight from the notification bar and smart reply. Both the features have now made it extremely easy to users interact without putting in much time for the job. 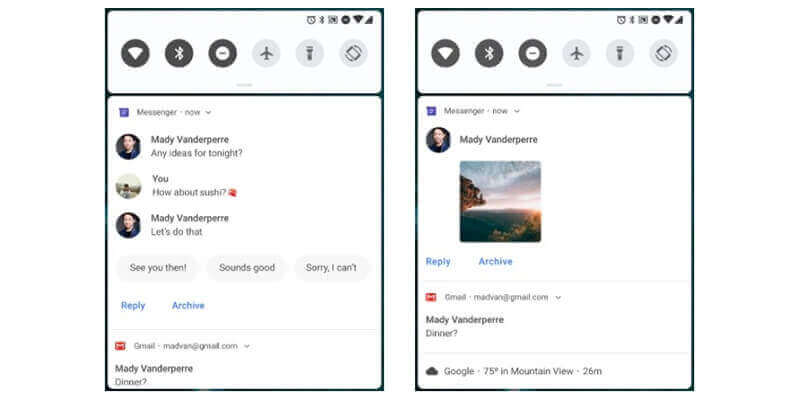 Businesses that have come on the mobile platform with instant messaging and all businesses that have incorporated chatbots to interact with the user will benefit most with the feature. Also, the content based apps would also benefit immensely from the new Android P feature.

Android P comes with a new suite of security features for the users. For starters, Android P restricts apps running in the background to access camera and mic, which heightens users privacy. Now the apps that try to use your camera without permission will get a system error and those that try to use your mic will be left with a blank sound.

To take security further, Android P has also made HTTPS default for apps. Now, users would be able to communicate over the app more securely.

Businesses that would benefit from Android P prominent focus on user privacy and security.

All. Ultimately, only those apps survive in the long term that makes every user experience a secure one.

HEIF or High-Efficiency Image File Format is the new file format developed by MPEG. Both HEIF and HDR VP9 are aimed at enabling users to capture images and make videos that are very clear. 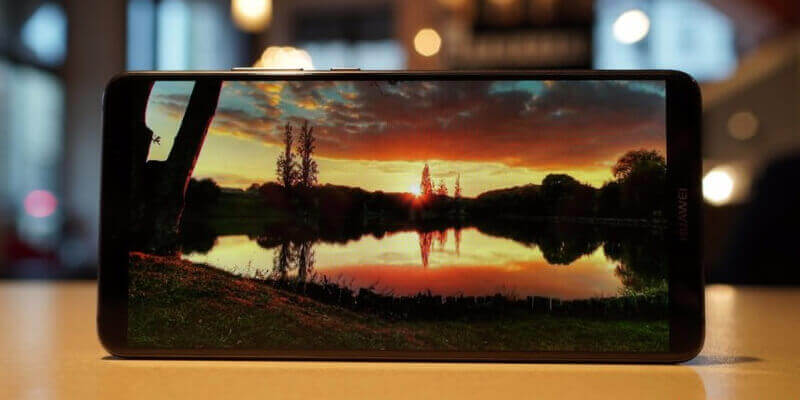 The business that would Benefit from Android P Support for HDR VP9 video format and HEIF image.

All camera apps and video creation apps would benefit from the new feature. Both will enable their users to make the most of the visual media that they capture.

In Android P Beta, Google has made Kotlin better with its code performance optimization wherein the various compiler optimization, which targets the loops have been improved.  In addition to it, in the upcoming beta release, codes that will be generated through Kotlin will be seen as optimized, using which developers will be able to improve the app performance by making the Kotlin plugin up-to-date.

Business that would Benefit from Android P Performance Boost to Kotlin

All. Every app that is developed using Kotlin language will come packed with fast speed specifically where loops are involved, which would ultimately up the app performance.

Even though we have looked into the range of app categories that would benefit from some of the most revolutionary Android P features, hinting towards the preparation that businesses should start along with their partnered mobile app development companies, it is still not convincing enough to make a business move to Android P.

An emphasis on why it’s time for businesses to go P (as we will call it until the Android P name is not revealed) and migrate to Android P Beta would remain incomplete till we give a clear picture of what makes Android P even better than the revolutionary Android O OS version.

Google has listed down the ways Android P 9.0 is different from Android O and the differences that developers will have to make in their app once they move to the new version in this documentation.

Meanwhile, here is a table (Android O vs Android P) highlighting some of the striking visual differences you will find in Android O and Android P. 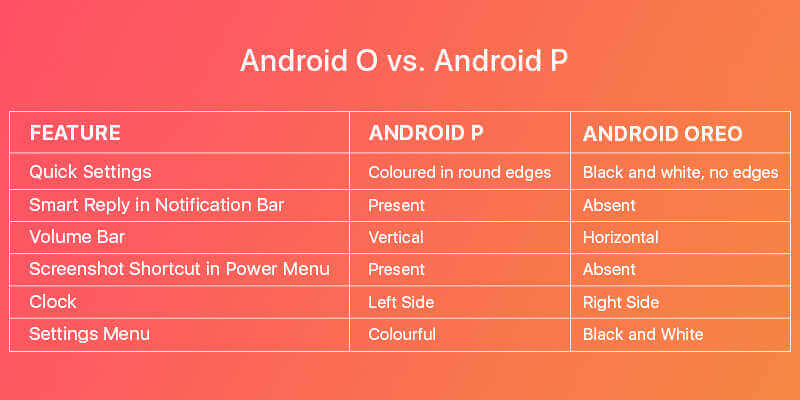 So, in this article we first looked into the Android P Beta announcement in Google I/O 2018 followed by the on point benefits that some of the prominent, changed Android P features would provide to the businesses that will soon be migrating to Android P. Next, to give a more comprehensive outlook to the reason why businesses should place moving to Android P in their business strategy, we looked into the points that make Android P 9.0 different from Android O (the version that is considered one of the most revolutionary ones till date).

With this, it is time, to sum up the article by listing the manufacturers that will bring Android P to their devices, along with the device list. The list will help businesses to give Android P a try before they make the investment of migrating to the new Google Operating System.

*Disclaimer: This list is of the devices that are most likely to get the update. Other device users can install the Android P launcher to get a walk through of the new OS.

The List of Devices That will Get Android P Update 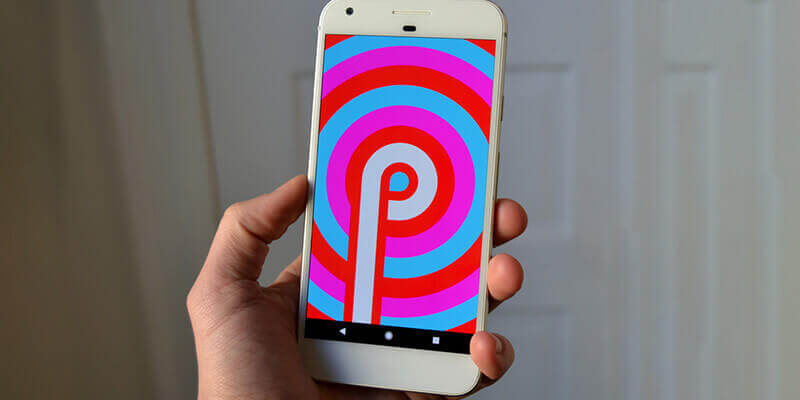 In case you are the owner of one of those devices that is not in the list or you are simply one of those who cannot wait to try Android P, the one solution that you have is of installing Android P Launcher.

To start experiencing the Android P, you will first have to install Android P APK, Here is link for downloading Android P Launcher.