Every year, Android keeps coming up with a new version, which is a much upgraded version of its previous self. The transformations, which are sometimes as drastic as a new look and feel of the device or at times are just a bundle of security patches. But, however big or small they are, Google continues to offer something new for both the users and developers to experience.

Through this article, we aim to keep you updated. Read this as a quick comparison sheet that has the information of what changed over time.

But before we start with seeing the factors that separate them from one another, here is a summary of theirs –

The latest entrant in the Android market, Oreo has been introduced with a set of revolutionary changes. From the new PIP mode to notification dots, and a whole new level of security blanket, Oreo has set a whole new set of examples in the history of Android updates.

With elements like multi-window view, quick switch between apps, and a whole new notification bar, Nougat has brought with itself over 1500 emojis and a battery saver function that doesn’t wait for device inactivity to start working.

The version brought with itself Doze – Android’s most powerful battery saver mode, till date. Marshmallow also saw permissions, which can be switched on and off as per users’ needs. One of the biggest changes that this version came with, was the Fingerprint scan, which allowed users to unlock their devices just with their fingertip scan. 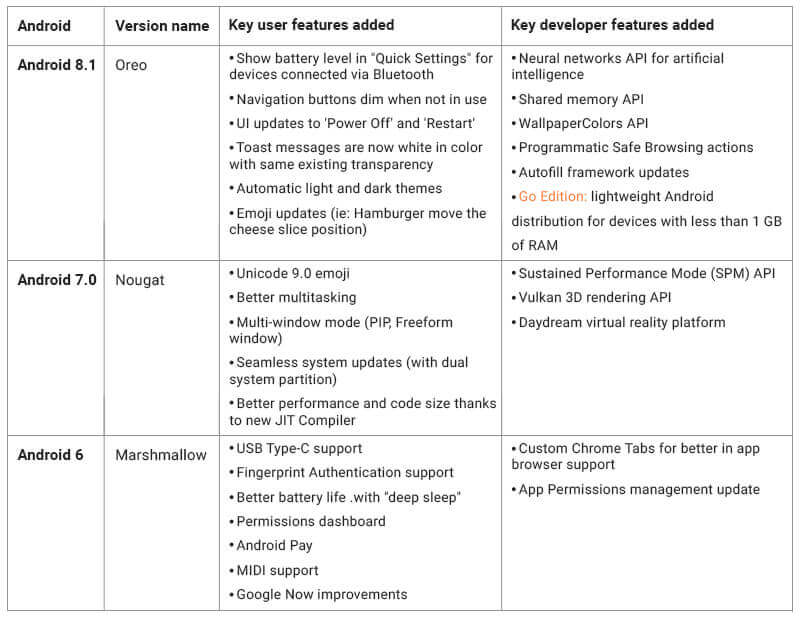 Now that we know what the versions came with, let us begin with the comparison of the three updates.

{Read: Android 10 vs Android 9: The Differences and Comparison}

Here’s a list of differentiating factors between the two versions of this OS, presently available on 28% Nougat and 1.1% Oreo devices.

However, Nougat is also not lagging behind when it comes to battery life.

One of the most noticeable changes in Oreo, when compared to the Nougat version has been the Quick Settings bar. While Android Nougat has both – a dark and light gray mixpanel for the device’s Quick Settings section, Oreo has changed it and has made it completely white, a visible difference from Nougat’s mute grey.

However, in Oreo, users can disable the specific activity’s notifications in an app so that while the users are not getting spammed but they are not missing out on critical notifications too.

{Note: Check out our article on best practices for push notifications strategy}

Notification Dots is the new element introduced by Android Oreo, which has made it much easier to take action against an app. By pressing on the app for long, you get an option called ‘App Info’ which open up to a screen that has information about the app, and has the option to uninstall and force stop the app.

In Nougat, you can still interact a lot with the app without opening it specifically. Example, you can reply to a Hangouts message straight from the home screen notification bar, only the Oreo’s App Info is missing in Nougat.

Installing Applications from the External Sources – Nougat vs Oreo

With Oreo, has aggravated the security when we talk about downloading the apps and giving them a free hand. Oreo allows you to individually deny or grant permission to every App.

In Nougat, all users have to do is give a one time access to the device to install apps from the external sources, unlike Oreo where users have to manually give permission to every app.

Improvements to the Android Runtime – Nougat vs Oreo

With Oreo, the operating system giant has made the app loading and a runtime, which is two times faster than what is seen in Nougat.

Animations like swiping down of the bar reveal the notification message have also been tightened which gives the illusion of speed in Oreo. But, otherwise, there are not many differences in other elements like when users switch between different mobile applications.

Here’s a list of differentiating factors between the two operating system versions, presently available on 26% Nougat Devices and 28% Marshmallow devices.

Doze – the powerful battery saving feature was introduced at the time of Marshmallow, but it only became better with Nougat.

In Marshmallow, the power saver mode only gets activated after a prolonged period of inactivity but in Nougat, the second you lock your phone screen, it goes into sleep mode, which seem to have brought a great deal of battery juice for the Nougat users.

Nothing much happened on the Notification front with Marshmallow. But, Nougat revamped the notification bar 180 degrees.

With Nougat, the users can now directly send replies from their device’s home screen, along with viewing notification bundled up individually app wise. Something which is not possible in Marshmallow.

Closing of Apps – Nougat vs Marshmallow

In Marshmallow, users would have to close all the apps individually in the recent/running app stack. But, with Nougat, Google enabled to close all the running/ recent apps with a single click.

Nougat brought a revolutionary change in users’ data saving capability. In Marshmallow, users are dependent on third party VPNs to limit the data usage of an app, but with Nougat, things are different.

In Nougat, users can view all the apps that are sucking up their data in their device’s settings tab and then control the data by force stopping the app from there itself.

Hope this article helped you with knowing how the three most used Android version separates from other.

Think we missed a factor? Feel free to add it in the comments below.